A new Pope becomes many things at once: a leader whose decisions shape the lives of 1.2 billion believers, a geopolitical figure whose approval is sought by heads of state and, inevitably, a celebrity. It’s that last part The Young Pope exploits brilliantly.

On HBO’s new drama (debuting in the U.S. Jan. 15 after airing last year in Europe), Jude Law‘s Pope Pius XIII cultivates his earthly image more assiduously than he does his relationship with the divine. He’ll shepherd his flock only after he’s dominated them with a punishing campaign of personal charm and terrifying force. The Young Pope is both a deliriously imaginative glimpse behind the locked doors of Vatican City and a clear-eyed examination of how tyrants consolidate power.

The series imagines a first American Pope in an alternate universe in which Francis seems never to have existed. It begins with Pius XIII having just gotten the nod from the College of Cardinals. Those who selected him to lead trust that his obvious suboptimal personal characteristics will be sanded down by the church’s strictures. (Some of his brusqueness seems to be cultural difference: born Lenny Belardo, and later the Archbishop of New York, this Pope has an outer-borough attitude.) But from his first moments in charge, Pius seeks less to evolve the church’s mission than to break it apart, using his charisma as a wedge and his nostalgic vision of a pious past that may never have existed as a replacement for the existing order. His first public speech plays up not each believer’s potential but the greatness of the leader himself: “I am closer to God than I am to you,” he declares, before demanding that members of the church turn their focus solely toward faith.

Fiercely protective of his image, Pius refuses to allow the dissemination of images he hasn’t approved. When he speaks to the world, he’s obscured by darkness, the better to allow his words to resonate. Law is terrific as Pius—his voice crackling with anger—but he’s better still as Lenny, the man who, in private, marvels at the fact that he has risen to one of the world’s highest offices. Pius believes far more strongly in his own calling to greatness than he does in the vitriol he spits about redoubled faith. The rhetoric, devoured by his fans and tolerated by those still hoping to regain control, allows him to further cement his own power.

Why does Lenny Belardo, perhaps not even one of the faithful—he jokes about not believing, though no one knows if he’s meant to be taken literally—want power so badly? The show has some ideas, showing flashbacks to an itinerant childhood in which he felt isolated, removed from warmth and kindness. (His parents abandoned him to be raised by nun Sister Mary, played in the present day by the excellent Diane Keaton, ever defending the man she knows to be great.) But the show’s central puzzle remains what Pius will do with the power he’s amassing. Various Vatican City eminences (including Silvio Orlando in a deliciously unctuous turn as the Cardinal Secretary of State) alternately try to cajole, trick and outright command their new charge into following established law.

And yet these priests, bound by centuries of established mores within which they’ve lived their entire lives, are ill equipped to deal with a genuine revolutionary. Show creator Paolo Sorrentino, the Italian director of films including The Great Beauty, has a careful eye for detail, as when the Cardinals surveil the Pope with a handheld spyglass. These are creatures of habit, political animals lazily untrained in the ways of real intrigue. They’re the perfect sort to be colonized by a man with a vision for himself.

After all, the papacy is not much fun, at least not in Sorrentino’s telling. Law shows us Pius’ restless soul, the edgy bit of Lenny in his curled lip as he baptizes baby after baby in a long-established tradition of favor trading. He’s also governed by unseemly appetites of the flesh. Pius extends the showiness of the office—stagy ceremony is part of the gig—to boundary-pushing flirtations with female disciples. The most interesting thing about the way Law spins the role is his utter lack of doubt: if he does it, it’s papal.

The Young Pope is as compellingly watchable as anything else you’ll find on TV. Sorrentino intuitively understands that which makes Catholicism—with its crosscurrents of guilt and exuberant hope as well as the opulent pageantry of the Vatican—fascinating grist for storytelling. And he’s unafraid to go what seems at first too far in service of a story that finds the universal in one warped leader’s specificities.

Take, for instance, a scene in which Pius gets dressed to address his Cardinals. LMFAO’s “Sexy and I Know It” plays, thumping and vacuous, as we see Law slowly try on his robes and his miter, adding various juicily colored rings atop his gloves. The camera eats up every bit of finery, fascinated by the pomp.

Though Sorrentino treats the subject without irony, we’re still inclined to chuckle, up until Pius is fully dressed. Then our Pope, all kitted out, stiffens his spine under his robes and orders his Cardinals to show “blind loyalty.” “Everything that was wide open,” he intones, “is gonna be closed.” That which the skeptics have feared has come to pass: Pius is proposing sweeping changes, including the end of forgiveness of sins. And yet he is so assured that they have no choice. One of the Pope’s greatest critics rises from his seat and kisses Pius’ elegantly shod foot. Led by an operator more enthralled by himself than by any work of man or God, one of the world’s greatest powers has been brought to heel. What authority does the institution have over the man who knows he’s right?

The Young Pope airs on HBO Sundays and Mondays at 9 p.m. E.T. 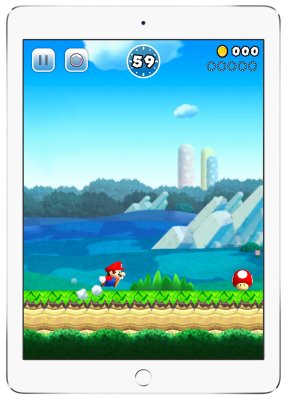 Mario on an iPhone? It Works
Next Up: Editor's Pick