To call Denis Villeneuve’s science-fiction extravaganza Dune a good example of its type of thing is probably damning it with fainter praise than it deserves. As someone who has zero interest in most books beloved by proselytizing, glassy-eyed dudes of the 1970s and 1980s, I always figured I could never be a Dune person. But I sort of enjoyed Villeneuve’s Dune—premiering out of competition at the Venice Film Festival and opening in the United States later this fall—and though it’s hard to say if serious Dune dudes will approve, what Villeneuve has put onscreen proves, at the very least, that he respects the source material to just the right degree. He neither genuflects to it nor tries to tart it up as a flashy, self-satisfied blockbuster flimflam. As movie spectacles go, it’s admirably understated: What can you say about a movie that makes the absolute most of sand?

Frank Herbert’s 1965 novel has long been considered unfilmable: Chilean-French filmmaker Alejandro Jodorowsky tried, unsuccessfully, to tackle it in the 1970s, and David Lynch’s 1984 version was widely viewed as a disappointment. Admittedly, Villeneuve (Arrival, Blade Runner 2049) has a bunch of modern filmmaking tools available to him that those filmmakers didn’t, but at least he makes good use of them. The story is set in the year 10191, on a dry desert planet, Arrakis, that’s rich in “spice,” a substance needed for interplanetary travel. The planet’s longtime inhabitants are the Fremen, desert people who have found ways to survive in a harsh environment—one of their mysterious and dignified denizens, Chani (Zendaya), shimmers into view in a series of dream sequences, before materializing in real life.

Zendaya as Chani in 'Dune,' which premiered at the Venice Film Festival
Courtesy of Warner Bros. Pictures and Legendary Pictures

For the Fremen, spice is a consciousness-enhancing substance, and they value it dearly. But other inhabitants of their interplanetary network think nothing of harvesting all the spice they want, giving the Fremen people nothing in return. (Dune, in case you haven’t guessed, is heavy with geopolitical and religious symbolism of all sorts.) The emperor of all the planets puts the head of a noble family, Duke Leto Atreides (Oscar Isaac, in a woolly gray beard), in charge of Arrakis. Atreides intends to be fair and benevolent. But when he moves to this unwelcoming, parched planet with his concubine, Lady Jessica (Rebecca Ferguson), and his teenage son, Paul Atreides (Timothée Chalamet), it becomes clear the emperor has drawn him into a web of deceit.

Lots of stuff happens in Dune, and this is only part one. (Villeneuve has expressed confidence that he’ll be able to finish the story in a second installment.) There are many scenes of flying vehicles buzzing about like iron dragonflies. Warriors go to battle with shimmery swords, their skin sizzling when they’re struck or wounded. Little mechanical bugs can shoot right into your skin and immobilize you before killing you, slowly. Jessica, one of the movie’s most compelling and enigmatic characters, is a member of an all-woman secret society with mystical powers. At one point, that group’s mother superior, played by Charlotte Rampling in a black beaded nun’s veil, tests young Paul’s fortitude by forcing him to stick his hand into a nasty box of pain, a gizmo the size of a box of tissues. His suffering is intense, and the anguish shows on his little acorn face—but then he gets used to it, and suddenly it’s no biggie. Previously skeptical mother superior has to admit to Jessica, the anxious mom, that this lackadaisical teenager just might have special powers of his own—but the jury is still out.

Because, of course, Dune is largely a story about a young man proving himself. Villeneuve presents this tale as an unapologetically poker-faced futuristic parable. There are characters with names like Duncan Idaho (who happens to be played, charmingly, by Jason Momoa), and everyone is waiting for someone known as the Kwisatz Haderach to show up. Villeneuve lays it out before us without smirking or winking; his go-for-broke earnestness feels honest and clean. And the effects, while lavish, also have a tasteful, polished quality. Particularly impressive is the massive Arrakis predator known as the sandworm, a fearsome creature that first makes its presence known as a giant ripple of action beneath the sand, before poking its lamprey-like head aboveground to sweep its prey—machinery, people, whatever—into its toothy gob. The sandworm is the stuff of nightmares, but Villeneuve’s vision of it has a shivery elegance. Dune is sluggish in places—my eyes glazed over during one or two or maybe three of the battle scenes—but Villeneuve’s conviction counts for a lot. I would probably sit through Dune Part Deux willingly—though Herbert’s book, I’m afraid, will remain forever unread. 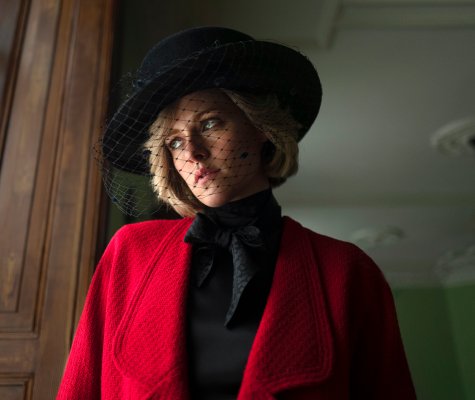 Kristen Stewart and Pablo Larraín Do Princess Diana Wrong in Spencer
Next Up: Editor's Pick