History is the work of mothers—civilization can’t move forward without them. That’s the rushing undercurrent of Pedro Almodóvar’s eloquent and subtly affecting new film Parallel Mothers (Madres paralelas), the opening film of the 78th annual Venice Film Festival. Penélope Cruz plays Janis, a professional photographer in her late thirties whose relationship with a married forensic anthropologist, Arturo (Israel Elejalde), results in pregnancy. In the maternity ward, she befriends another mother-to-be, Ana (Milena Smit), a teenager whose child was conceived under very different circumstances. Both give birth on the same day, to girls, and in the time just before and immediately after delivery they trade confidences, helping each other through this strange period of transition as the welcome these instantly beloved little strangers into their lives.

The story Almodovar tells involves one shocking discovery and the keeping of secrets, as well as the way motherhood can bring women together, only to lead them down different paths—in that way, it provides plenty of opportunity for the melodramatic flourishes this 71-year-old filmmaker loves so well. But with his 23rd film, Almodóvar continues to tap the contemplative vein of his last feature, 2019’s superb Pain & Glory, a semiautobiographical exploration of aging and mortality. This time, he’s also delving more directly than usual into the pain of his country’s past. Even before her baby is born, Janis, who lives in Madrid, is consumed with one goal: to open a mass grave in her home village, containing the body of her great-grandfather and several of his compatriots, murdered in the Spanish Civil War and never properly mourned or honored. Somehow, Almodóvar teases two entwining tendrils into one graceful vine, a reflection on the way babies, even as they point the way to the future, connect us—with their inherited smiles, the DNA sparkle in their eyes—with the lives of those who came before.

Parallel Mothers is a movie of infinite tenderness, that rare ode to motherhood that acknowledges mothers as women first and mothers second. Women are Almodóvar’s world, and the movie worlds he writes for them are rich and affectionate, too. In an early scene, as this duo of moms get ready to push their babies out into the world, their respective coaches—with neither of the fathers in the picture—show up in a double flurry: Ana’s mother, Teresa (Aitana Sánchez-Gijón), a self-involved actress, sweeps into the room in a supple camel-colored coat made more for a Hitchcock heroine than a birthing-room helper. Meanwhile, Janis’ closest friend, magazine editor Elena—played by the wonderful Almodóvar veteran Rossy de Palma, whose marvelous schnozz is one of the grandest in movie history—arrives in a riot of multicolored plaid, ready to welcome baby into a polychrome galaxy of love.

The contrast between these two helpers is a witty touch, and just one example of the way Almodóvar enlists the power of color and costuming in everything he does—though it’s worth noting that he ultimately allows Teresa, even within her bubble of selfishness, to emerge as a complicated, fragile human. There are no villains in Parallel Mothers, beyond political ones: Almodóvar is interested in extreme drama, with its inherent joy and emotional turmoil, but he also makes room for forgiveness. There is no future without it.

And with these two lead roles, he gives newcomer Smit and certified movie star Cruz an unqualified gift. The friendship between Janis and Ana is at times frayed but ultimately forges itself into something stronger than sisterhood, and Smit and Cruz carry us deftly through its evolution. When we first meet Smit’s Ana, she’s practically a schoolgirl, a confused innocent who, with her swollen belly, has no idea what’s in store for her. Later, her life forced into a new shape by tragedy, she emerges as her own woman, a warrior queen with a bleached pixie ’do. Smit, her eyes both resolute and soft, segues from girl to woman in a single, believable heartbeat.

Cruz has long been one of Almodóvar’s signature actors, a dazzling, witty presence in movies like All About My Mother and Volver. These two understand each other completely; it seems she’s able to follow the sometimes squirrelly crumb trails of his thinking without missing a step. Cruz is astonishing here, in what may be the best performance of her career so far. Janis’ fragility and her fortitude are two sides of one coin, and Cruz can shift from one to the other in the merest breath. Just as Janis believes she has everything she wanted and never thought she’d get—she has at last become a mother, after thinking it would never happen—she’s faced with a new trial, and the possibility of loss.

Because only in the movies are people’s problems solved by a single event. In real life, most solutions also open the door to at least one problem—and yet through those same doors, blessings also walk through. Cruz plays Janis as a woman who learns to stop watching that door and instead simply welcome whatever comes next. To reach that point, she must also reckon with the way her own past—her ancestry, and thus that of her child—dovetails with the sometimes painful history of her country. Cruz folds all of that complexity into this performance. With a blink of her Cleopatra eyes, she sends Almodóvar’s Morse Code message of love out into the world. Anybody who’s open to the lingo can understand. 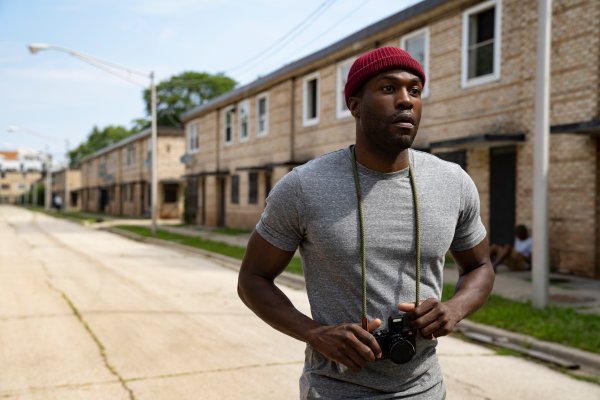 How Candyman Reclaims the History of Cabrini-Green
Next Up: Editor's Pick