If you’re going to borrow, borrow from the best. Jane Campion begins and ends her sinewy western The Power of the Dog with a nod to John Ford’s penchant for framing figures and action through doorways and windows, less a way of focusing our gaze than a proclamation: This is cinema, people—use the whole canvas! After an enforced year or so of watching movies on tiny screens, it’s a pleasure to sink into Campion’s smart, entertaining and terrifically tense sand-painting of a picture, premiering at the 78th annual Venice Film Festival.

Based on Thomas Savage’s 1967 novel of sibling strife in 1920s Montana, The Power of the Dog stars Benedict Cumberbatch and Jesse Plemons as, respectively, Phil and George Burbank, rancher brothers whose disparate personalities could be summed up in a single sentence: One bathes, the other doesn’t. George, the bather, is tidy and polite, given to wearing Sunday-best suits and ties as he goes about his rancher business. Phil is the rebel, snarling in cruddy chaps; knife in hand, he can castrate a bull with a flick of the wrist. When George falls in love with and marries Rose (Kirsten Dunst), the widowed proprietress of a desolate hotel, Phil seethes with a roiling crock full of emotions—resentment, jealousy, disdain—that find their way out through Cumberbatch’s pinched, appraising eyes. He assesses the world and finds it contemptible.

But Phil really takes a dislike to Rose’s slim-as-a-reed son, Peter (Kodi Smit-McPhee), a sensitive, dreamy lad who likes to make paper flowers and accepts his mother’s doting attention freely. Phil immediately spots Peter as being way too soft, a sissy boy, and hazes him ruthlessly. We come to learn that Phil idolizes a long-gone horseman named Bronco Henry, a mythic figure who taught Phil everything he knows about riding horses, and other things. Phil’s notions of what a real man ought to be are both rigid and wrong-headed, and he inflicts them on those around him like snake venom.

If your latent-homosexuality alert hasn’t gone off yet, it may be time to calibrate the settings. Yet nothing in The Power of the Dog goes quite as you expect. If Phil is cruel, his intelligence is off the charts—and even he is capable of succumbing to enchantment. Campion—in her first feature since the velvety-gorgeous 2009 romance Bright Star—navigates the story’s tricky shifts with ease, and the performances are uniformly fine. Dunst’s Rose, in particular, is a careworn marvel, a fragile beauty who knows the years ahead won’t be kind to her: she’s perched at the tipping point between cherub and matron.

The Power of the Dog works as a western, a thriller, a psychological study of masculinity gone awry. Best of all, Campion and her cinematographer, Ari Wegner, use the expanse of screen they’ve been given as if it were a precious resource, making the most of a purple-velour mountain backdrop or the interior of the Burbanks’ large but airless house, a stifling arena of melancholy mahogany furniture and Persian rugs topped with gratuitous bearskins. This is a movie as big as the open sky, but one where human emotions are still distinctly visible, as fine and sharp as a blade of grass. 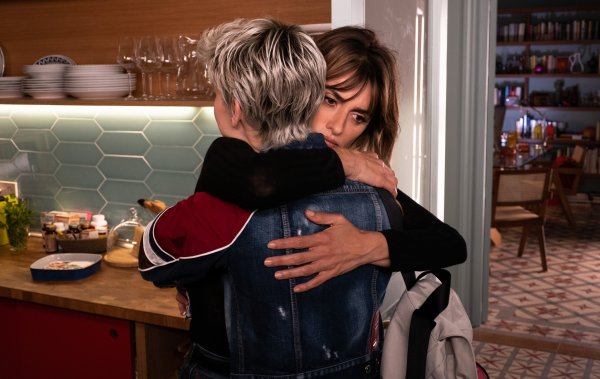 Penélope Cruz Gives One of the Best Performances of Her Career in Pedro Almodóvar's Parallel Mothers
Next Up: Editor's Pick