Thirty miles northwest of Madrid, a brooding 500-foot stone cross soars above the pine-strewn slopes of the Sierra Guadarrama. Beneath this dramatic feature is a Catholic basilica, hewn out of the granite ridge, and reached via a wide esplanade that overlooks the magnificent landscape beyond. Known as the Valle de los Caídos (“Valley of the Fallen”), this is one of the most controversial sites in Spain. Buried behind its high altar lie the remains of the man who commissioned it, the dictator General Francisco Franco.

The Valley of the Fallen is Franco’s monolithic commemoration of the Spanish Civil War. Its scale reflects his ambition that it should echo “the grandeur of the monuments of old, which defy time and forgetfulness.” Nominally a tribute to the dead of both sides, in reality it enshrined Franco’s victorious “crusade” and continues to serve as a rallying point for his admirers. To his opponents, it is an egregious whitewash of a harrowing period within living memory, one that still haunts the country 80 years after the conflict ended on April 1, 1939. With the Valley’s future at stake in upcoming national elections, Spain is confronting a matter faced by many societies around the world: how to deal with monuments that glorify a polarized past.

The Spanish Civil War began in the summer of 1936, when army officers launched a coup against the country’s young Republic. When their uprising failed, a brutal struggle ensued between Republicans and an alliance of Spain’s disparate conservative groups, known collectively as the Nationalists.

Aided by Mussolini and Hitler, and soon dominated by Franco himself, the Nationalists unleashed a torrent of violence against any Spaniard suspected of Republican sympathies. They were animated by a belief that the progressive agenda espoused by the Republic signaled a global “Marxist-Jewish-Masonic” conspiracy. This “anti-Spain” was an alien threat to an age-old social order predicated on entitlement and tradition. The Nationalists’ victims were thrown unceremoniously into shallow graves throughout Spain. By its final weeks, the war had claimed over half a million lives.

Barcelona fell to Franco’s forces in late January 1939. Meanwhile, the Republic’s prime minister, Juan Negrín, prayed for the outbreak of a general European war that might finally persuade the Western democracies to confront the fascist menace. Thousands of refugees surged towards the French border. Along Alicante’s harborside, Republicans, desperate for escape, committed suicide. On March 27, the Nationalists entered Madrid; and, four days later, the whole country was theirs.

After March 1939, some 20,000 Republicans were extrajudicially executed, with countless others dying from disease and malnutrition in overcrowded prisons and internment camps. The Manchester Guardian estimated that 300 people a week were shot in Barcelona during May 1939. Many Republican refugees in France fell into the system of Nazi concentration and death camps after Germany’s invasion in 1940, with most incarcerated at Mauthausen.

In Franco’s Spain, Republican women were persecuted as harbingers of degeneracy. Many endured biological “experiments” in an effort to isolate the “red gene.” Pregnancy was no guarantee of clemency — one judge complained: “we cannot wait seven months to execute a woman.” In prisons, children born to inmates were mistreated, locked in dark rooms and forced to eat their own vomit. Hundreds were snatched from their mothers and adopted by Francoist families or raised in religious establishments.

For Franco, tyranny was an investment, binding those dispensing it to his fate. Mindful of potential vengeance, its perpetrators would never abandon him. The Valley of the Fallen is the abiding physical manifestation of that tacit contract, meant to serve as an act of “national reconciliation.” It was also, for him, a way to control and reflect the official narrative of the civil war. Built partly through slave labor and under conditions that resulted in several deaths and injuries, work began in 1940. Before its inauguration in 1959, the remains of over 30,000 Nationalist and Republican combatants killed during the Civil War were exhumed without their relatives’ consent and reinterred there.

When Franco died in November of 1975, his successors wasted little time dismantling his regime. The success of this remarkable transition has been attributed to the so-called “Pact of Forgetting.” The architects of Spain’s new democracy resolved to look squarely ahead, granting amnesty to those liable for crimes dating back decades. But for millions of Spaniards the past never relinquished its grip. Last year, Pedro Sánchez’s government ruled that Franco would be exhumed and his pantheon reimagined as a Civil War museum. Plans for a truth commission to investigate the dictatorship’s crimes were also announced.

Removed from the trauma, the Civil War’s legacy outside of Spain has been defused, romanticized in Ernest Hemingway’s novels, movies like Pan’s Labyrinth and even British rock songs. In Spain, the Association for the Recovery of Historical Memory has excavated some of Franco’s mass graves, reuniting hundreds of families with the remains of their loved ones. But the thousands still in the Valley of the Fallen remain hostage to the most prominent vestige of Franco’s memory. When Spaniards go to the polls on April 28, they will do so knowing that a vote for Sánchez’s party means profound consequences for the site.

Across the Atlantic, the disputed legacy of another civil war has intriguing parallels with Spain’s, as the United States continues to debate what to do with monuments to the Confederacy. President Donald Trump has expressed concerns that removing these “beautiful statues” is tantamount to American history being “ripped apart.” But that history includes the fact that such monuments were built not only to venerate, but also to intimidate. As Charlottesville’s former mayor, Michael Signer, has said: “These monuments have stood not as historic or educational markers of our legacy of slavery and segregation, but in celebration of it.”

The charge inevitably levied against those seeking to reinterpret controversial monuments is that it invites amnesia. Far better, their defenders argue, to leave them be as prompts for reflection on the events that inspired their creation. But such landmarks tend to come with blind spots built in, whether by accident or design. They often preserve a one-sided narrative from which, ironically, creeps the very oblivion their apologists decry.

In fact, the heated debate about the function of memorials like the Valley of the Fallen indicates the total opposite of amnesia, demonstrating that they do not define history; on the contrary, history defines them.

Danny Bird is a graduate of UCL School of Slavonic and East European Studies, with a special interest in modern Russian and Spanish history. 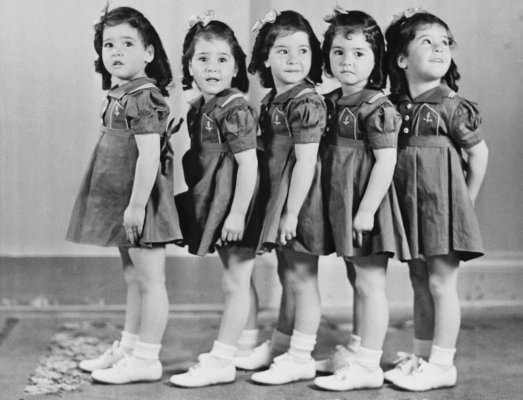 The Story of the Dionne Quintuplets Is a Cautionary Tale for the Age of ‘Kidfluencers’
Next Up: Editor's Pick