Time flies when you’re stuck inside. Though 2021 began in a haze of uncertainty, we’re now some five months in, and for many of us—finally—things are looking brighter. Movies helped: So far, the riches of this year include a new short (but astonishing) film from Spanish maestro Pedro Almodóvar, a gorgeous black-and-white documentary featuring a mother pig and her squeaking, scrambling family, and a stunning film from India that, come December, will certainly end up being among the best of the year. We’re off to a good start—and it’s never too early to start feeling grateful. Here are the best movies of 2021 so far.

In this gorgeous, quietly affecting film from Chaitanya Tamhane (director of 2014’s Court), a singer with perhaps less-than-stellar gifts (played, superbly, by Aditya Modak), strives to make a life for himself in the rarefied and decidedly un-lucrative world of Indian classical music. The Disciple slipped quietly onto Netflix at the end of April, but no one should sleep on this one: It’s one of the best movies of the year, a luminous examination of what it means to pursue a dream so feverishly that living in the real world takes a backseat. At the same time, it keeps another complicated reality within its sights: Art may be the very thing that gets us through life, but for us to enjoy it, someone has to make it in the first place—and there’s always a cost attached.

If you’ve seen any of the films of Swedish director Roy Andersson—particularly his rapturously deadpan 2014 A Pigeon Sat on a Branch Reflecting on Existence—you already have some sense of this director’s wry approach to that nebulous thing we so cavalierly call the human condition. About Endlessness is a series of vignettes, gorgeously filmed in tender, muted colors, about people getting through their days, and through their lives. Sometimes these people are reasonably content; sometimes they’re in great pain. There’s an elderly, distracted waiter who forgets to stop pouring wine into a huffy businessman’s glass, and a dental patient who refuses anesthesia because he’s afraid of needles, only to scream in pain whenever the drill comes near the offending tooth. Most striking of all is a single story that threads through all the rest: A distraught man (Martin Serner) seeks psychiatric help when he realizes he’s losing his faith in God—a rather fraught state of affairs, considering he’s a priest. If that doesn’t sound terribly funny, you should know that in Andersson’s hands, somehow it is—though in a way that makes you unsure whether to laugh or cry. For most of us, in between moments of despair and joy, there are long stretches of just getting by. About Endlessness, meditative, mournful and subtly celebratory, reminds us to cherish the in-between.

You have to be rich to be a connoisseur of wild truffles, precious little morsels that can cost jillions of dollars (or thereabouts) per ounce. But Michael Dweck and Gregory Kershaw’s delightful documentary reminds us that these veritable lumps of gold originate in a place that is quite literally down to earth. The Truffle Hunters follows a group of elderly men who—along with their trusty, snuffling dogs—forage in the forests of Piedmont, Italy, for ultra-rare Alba truffles, which cannot be cultivated. These men are crotchety, opinioned creatures of habit, great characters in their own right, though their dogs steal the show, as dogs so often do. Be prepared for a few notes of sorrow—but overall, this is a beautiful, joyous documentary.

Pedro Almodóvar’s first English-language film is a short one, just 30 fleet minutes, but it’s so rich and bold that it flowers bounteously into the space around it. In this adaptation of a 1930 play by Jean Cocteau—which spurred several films in the ensuing decades, and inspired Almodóvar’s own Women on the Verge of a Nervous Breakdown—a woman confronts her soon-to-be ex-lover on the phone. As she speaks, she waffles between defiance and denial, confidence and raw, naked need. This woman, the story’s chief human character—there’s also a marvelous, winsome canine—is played by Tilda Swinton, who molds the text into an invisible yet tactile sculpture, a shape in the air that speaks of wordless insecurities and fears. In the end, though, this woman on the verge finds something to revel in: the satisfaction of taking charge of her own survival.

There’s beauty everywhere in the world, as you’re reminded when you see sunlight filtered through a piglet’s translucent ears in Viktor Kosakovskiy’s radiant documentary Gunda. To call Gunda a documentary isn’t quite right; it’s semi-experimental, a picture that induces rippling emotional vibrations as much as it tells a visual story. This wordless, music-less, but not gruntless, film details the daily farm life of a mother pig, the Gunda of the title, who, after giving birth to a passel of little squigglies, cares for them with a kind of earthbound tenderness. Though Gunda and her babies are the stars of this deeply meditative film—shot in lustrous black-and-white that’s somehow more colorful than color—a couple of cows and a stouthearted one-legged chicken occasionally steal the spotlight, side players with their own moments of pastoral grace. Gunda is bracingly unsentimental: these are farm animals after all, and whatever commitments—to eat or not to eat?—we may make to them on a personal level, we can’t deny the reality of their lives. Even so, this film is more lyrical than it is harrowing, a work that stresses our connection to the animal world, and may even strengthen our commitment to it.

Sometimes a smart, gentle movie based—but not too rigorously—on fact is the diversion you didn’t know you needed. That’s The Dig, directed by Simon Stone and based on a novel by John Preston, which was in turn based on a real-life event: The discovery of the Sutton Hoo treasures, a collection of Anglo-Saxon artifacts unearthed in the English countryside, in the late 1930s, on the land of a widow named Edith Pretty. Pretty is played here, with tweedy purposefulness, by Carey Mulligan. Ralph Fiennes is wonderful as Basil Brown, the experienced but modest excavator whom she enlists to dig on her land; it’s he who initially discovers these ancient goodies. Some of the treasures eventually unearthed were made of gems and gold; others were wrought simply from iron. But all of them tell us something about the lives of humans who lived long ago, and the thrill of that knowledge fosters a platonic kinship between Pretty and Brown. This is the story of two people who made history by unearthing bits of it for future generations. It’s an intelligent and charming film that doesn’t outwear its welcome.

The SpongeBob Movie: Sponge on the Run

Everyone needs a dose of escapist ridiculousness now and then, and The SpongeBob Movie: Sponge on the Run, directed by Tim Hill, is the most exquisite example to have appeared this year. The undersea talking yellow sponge known as SpongeBob (voiced by Tom Kenny) is heartbroken when his meowing pet snail Gary goes missing. It turns out Gary has been snail-napped by vain sea god Poseidon (Matt Berry), who has run out of the snail slime that keeps his complexion glowing. The rescue involves a whacked-out robot (voiced by Awkwafina) and the sage advice of a mystically glowing Keanu Reeves, speaking from the center of a tumbleweed. (His character’s name, aptly, is Sage.) The jokes in Sponge on the Run, silly as they are, won’t insult your dignity or your intelligence. They’re pure, ludicrous joy, the heart of a movie that is itself an act of loony generosity. 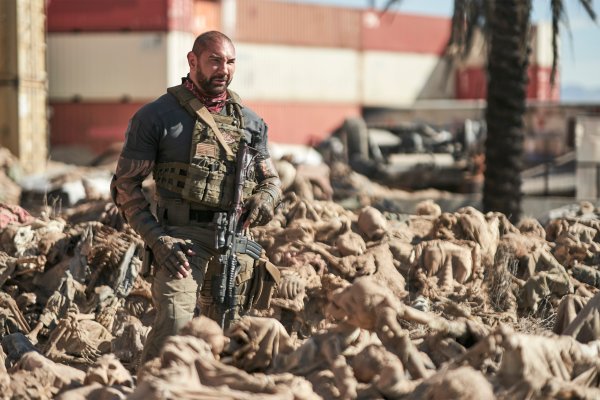 Netflix's Army of the Dead Is a Heaping Dish of Turn-Off-Your-Brain Entertainment
Next Up: Editor's Pick