Sleepless Nights, Hotel Room Sprints, So Much 7-Eleven: What It's Like to Cover the Tokyo Olympics

Was it really going to come to this? One day during the 14-day “soft” quarantine all Olympic reporters in Tokyo reporters had to observe—don’t ask me which day, it’s all a blur—I was going more than a little stir-crazy planted in a hotel-room chair, filing a story.

Under the regulations, I could only leave the room to travel to an Olympic venue to cover an event or to the press center. I could also go to a local convenience store—in my case, 7-Eleven—for 15 minutes to grab snacks or a pre-packaged meal. No walks around the vibrant Shinjuku neighborhood in which our accommodations were located. No daily run. No leisurely fresh air stroll.

I had been in Tokyo for a week at this point, sleeping a lot less than I should, bouncing around to not always convenient venues, writing and reporting stories often within the confines of four walls. I could only engage with one of the world’s greatest cities through the windows of a media bus or media-designated taxi (no public transportation allowed during quarantine). And now, on day whatever of quarantine, I had finally arrived at the foggy moment where my brain was struggling to type another word.

Then I came to a realization: I really, really need to move.

Truth be told, I’m no fitness nut. But as I’ve advanced in age, the head-clearing benefits of a neighborhood jog have only seemed to increase. But going outside was against the rules. So I did the next best thing. Or, really, the only thing. I stepped out of my room and started sprinting up and down the narrow hallways, making like a much, much slower Elaine Thompson-Herah. If one of the other guests had opened their door that afternoon while I was running by, I would have been sent flying like a discus off the ceiling.

At every Olympics, journalists gripe about the logistics—the buses aren’t running on time, the venues are too spread out, the food at the track and field snack bar is atrocious. It’s practically a sport in itself. And no doubt, in the eight Olympics I’ve covered for TIME since Athens 2004, the Tokyo Games were the most difficult to maneuver.

Reporting on the Olympics is always a privilege and an adrenaline rush. These Games have been no different, even though the Olympics unfolded under a state of emergency in Tokyo, where COVID-19 cases are hitting all-time highs. If attending to those covering the Olympics wasn’t top-of-mind for organizers trying to operate without unleashing a potentially horrific public health emergency, that’s as it should be.

Sure, some of the rules didn’t make a ton of sense. As my colleague Alice Park, a health reporter when she’s not covering swimming and gymnastics, has detailed, a few of the practices here fly in the face of smart public health policy. Media are packed onto stale-air buses for the ride to the press center, we have to hold our unmasked faces up against scanners (one reporter after the other, potentially sharing respiratory droplets), and we conduct athlete interviews at indoor “mixed zones,” where athletes and media weren’t always spread out.

READ MORE: Everyone Knew Tokyo Would Be One of the Hottest Olympics Ever. It’s Taking A Brutal Toll

And the rigidity of the rules took some getting used to. I realized I left an umbrella on a media bus the other day, just as it was driving away from us at the main Media Transport Mall. As I took off across the lot to retrieve it, a couple of volunteers nearly gang-tackled me, as if I were long-jumping over security at JFK. (An understanding worker eventually accompanied me across the lot, the driver on my bus was out taking a break. I gave the worker my phone number, so he could give me a shout when the driver came back. He agreed. I’m still waiting for that call.)

In some “mixed-zones” where athletes and reporters can talk, from a social distance, media needed to secure a ticket to access the area. The sensible goal: limit tickets to limit crowding in a pandemic.

But as I approached a nearly empty mixed zone at men’s park skateboarding—the scorching heat surely dampened the enthusiasm—I figured I didn’t really need a ticket. A staffer handed me one anyway. I took two steps. Another worker collected it.

Oddities aside, the biggest daily stresses—on this reporter, at least—involved transportation and food. Tokyo organizers cut back on the usual media bus service at these Games; again, with no fans here to fill the coffers, and additional money devoted to COVID-19 countermeasures, this was an understandable budget slash. Public transit is usually the best way to navigate a dense city. But it was off-limits to journalists during our first 14 days in the country. So we often had to rely on calling a phone number to reserve a taxi, navigating a language barrier, and hoping the driver would show up. When covering late-night games far outside central Tokyo, the fear of being stranded with no way to get home was real.

Eating well was its own challenge during the quarantine period. Tokyo’s 24-hour convenience stores are rightly beloved and offer far more options than their U.S. counterparts, but no one wants to subsist on them for two weeks when you’re in one of the world’s gastronomic capitals. Following far too many consecutive nights standing under 7-Eleven’s bright white lights at 2 a.m., choosing between Nissin Big Cup Noddle and pre-packaged spaghetti as a Muzak version of “Under the Sea” loops, myopia sets in. Hence sprinting up and down the hotel hallway to stay sane.

All in all, however, the Olympic positives always outweigh the downsides, even under these extraordinary circumstances. That spaghetti never failed to do the trick and kept me from going to bed hungry. The volunteers and workers who refused to bend illogical rules were just carrying out and instructions and doing their jobs. We’ve all been there.

The people of Tokyo could not have been friendlier and more helpful in a pinch. To the Tokyo police officer at 3×3 basketball who accepted my desperate request to take my cell phone and speak Japanese for 10 minutes to a lost taxi driver, guiding him to the correct pickup point, and even accompanying me there, thank you. Your kindness made the difference between a 1:30 a.m. hotel (and 7-Eleven) arrival and a 3:30 a.m. hotel (and 7-Eleven) arrival through a convoluted bus route; at the Olympics, every hour of rest counts.

On Tuesday, Aug. 3, I saw the magic word on the health-reporting app media had to download before arriving here: “Cleared.”

Quarantine was up, so we could now move somewhat freely, though obviously masked and distanced, even for those of us who are fully vaccinated. I could finally navigate Tokyo’s subway system; despite a map that’s downright daunting, and eat a restorative meal at one of the Shinjuku restaurants I had been jealously eyeing.

And I could go for a run. Early on the morning of clearance, I bounced out of the hotel and jogged down to the Shinjuku Gyoen National Garden, a green oasis I’ve been counting on since we booked the place in early 2019, a year before the pandemic struck. It didn’t open until 9 a.m. But just running along the adjacent road, ingesting the aroma of actual trees, was restorative.

Air. Freedom. No threat of Room 808 knocking me into oblivion during a crazed indoor sprint, ending my Games early.

It makes all the difference. 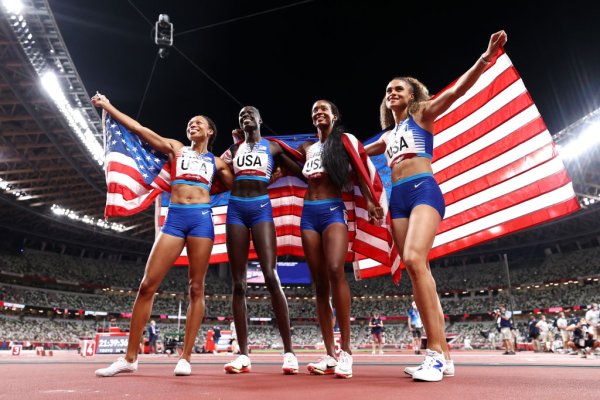