Elaine Thompson-Herah knew she had it won, the 100-m race on Saturday night at the Olympic Stadium in Tokyo, Japan. So the defending 100-m Olympic champion pointed at the scoreboard before the finish, just like fellow Jamaican, Usain Bolt, did at the 2008 Beijing Games. Her final time in the race was 10.61 seconds, a new Olympic record, breaking Florence Griffith-Joyner’s 10.62 mark from the 1988 Olympics.

It was the second-fastest 100-m time in history. If she hadn’t pointed, could Thompson-Herah have broken Flo-Jo’s world record mark, 10.49 seconds, that was also set in 1988?

“Most definitely, if I wasn’t celebrating,” Thompson-Herah said after the race.

Did she regret it at all?

“No. No. No. No.,” said Thompson-Hearh, the Jamaican flag still draped over her shoulder from her victory lap.

A gold medal and Olympic record was good enough; and it was a celebration to remember.

Only one American sprinter, Teahna Daniels, made the final. She finished 7th.

Before the start, the stadium went pitch black. The assembled athletic officials and journalists allowed in the venue to watch wondered if the power went out. A spotlight then shone on each athlete as they were being introduced, giving the event its proper big-time feel. Fraser-Pryce, who was aiming to join Bolt as the only sprinter in history to win three 100-m golds, said she stumbled on her third step and never recovered.

“It definitely wasn’t the race I wanted, in terms of the technical part of it,” said a clearly disappointed Fraser-Pryce, sporting distinctive yellow hair on top, a fiery orange blaze down the back, after the race. “I don’t ever find an excuse for anything, as an athlete you have to show up and perform regardless of what happened .. It is what it is.”

Thompson-Herah’s win is even more remarkable given she was fighting an Achilles injury that almost cost her a spot on the Jamaican team. She finished third at the Jamaican trials in June, and said she was in great pain going into that race.

“Two months ago, probably a month and a half, I didn’t think I’d be here today,” said Thompson-Herah. She took a breath, barely holding in her emotion. “I held my composure. I believed in myself.”

Thus far, many runners have commented about the bounciness of the Tokyo track, which has led to fast times in various races and hopes for more to be broken next week. But, Thompson-Herah wasn’t going to give it any credit for her historic race; she said her training got the job done.

She was also asked about an absence that overshadowed this race: American Sha’carri Richardson rocketed to the 100-m title at the U.S. Olympic Track and Field trials, and track fans all over the world anticipated her potential showdown with the Jamaican contingent. Thompson-Herah was asked how Richardson would stack up against her.

Though Fraser-Pryce, who’s 34 and has said this will be her last Olympics, fell short of joining Bolt as a three-time 100-m gold medalist, now Thompson-Herah earns a chance to become the first woman to achieve that feat, at the 2024 Paris Games.

And Jamaica is still winning. Thompson-Herah is also the defending 200-m gold medalist; her, Fraser-Pryce, and Jackson are all set to run that race too in Tokyo. The 200-m final is on Aug. 3.

“We will continue to get more medals and more medals,” says Jackson, the bronze medalist, about her country. “We are the greatest.” 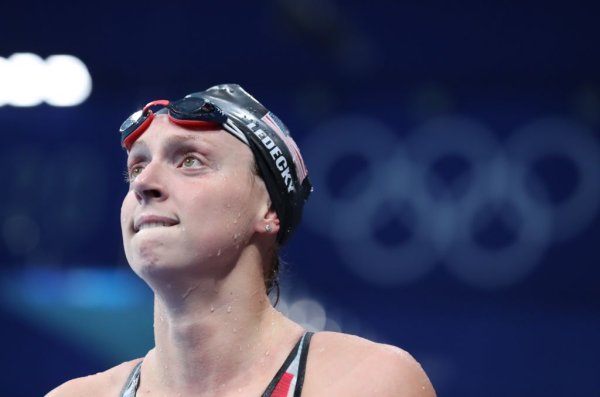