How Israel's Baseball Team Made It to the Tokyo Olympics

Six countries are competing for gold in baseball at the Tokyo Olympics—and five of them should come as little to surprise to fans of the sport: Japan, Mexico, South Korea, the Dominican Republic and the United States all have rich baseball traditions and have produced top Major League players. The sixth? Israel, a country which little baseball heritage that hasn’t made the Summer Games in a team sport in more than 40 years.

Israel’s unlikely baseball success dates partly to late 2016, when Peter Kurz, president of the Israel Association of Baseball, set up a meeting with Eric Holtz, owner of a baseball training facility in suburban New York City. Holtz had coached the U.S. baseball team at the Maccabiah Games, a quadrennial multi-sport competition in Israel featuring top Jewish athletes from around the world. Kurz offered Holtz a chance to take over Israel’s senior national team. “He basically said, ‘if we can do this, this, this, this and this,’ we’d have a chance to go to the Olympics,” Holtz tells TIME. “And I looked at him, and I was like, are you f–king nuts?”

Holtz accepted anyway, and Israel took care of that daunting checklist to make it to Tokyo: recruiting U.S.-based Jewish players with college and minor league experience, assisting them in making aliyah, or pilgrimage to Israel, to become Israeli citizens, and winning a gauntlet of Olympic qualifying games. Israel has only a smattering of baseball fields, and some of the players on the squad hold day jobs. Shlomo Lipetz, a 42-year-old pitcher and one of four Israeli natives on the 24-man team, also books music acts for the concert and event venue chain City Winery.

The last time an Israeli team sport qualified for the Olympics was 1976, when men’s soccer played in Montreal. It helps that eight players on the team in Tokyo have major league experience, including four-time All-Star Ian Kinsler and Danny Valencia, who played nine years in the big leagues from 2010-2018. Still, Israel, which opens up its tournament on Thursday against South Korea in Yokohama and plays Team USA on Friday, will face nations with much bluer baseball blood. The hope: a high-profile Olympic run will help Israel establish a tradition of its own.

“We’ve been compared to the Jamaican bobsled team,” says Holtz. “I love it. Because two years ago, nobody took us seriously. And all we did was go 17-4 in European qualifying tournaments. I hope that never changes. Let them pay more attention to the big-name teams, the big-country teams. Let them not worry about us. And we’ll just show up and play.”

Lipetz, the team’s veteran right-hander from Tel Aviv, first caught the baseball bug on a trip to New York when he was 7; his uncle took him to see the 1986 New York Mets, a character-filled team that went on to win the World Series. But when he got back home to Israel, he found few kids who shared his newfound passion. “You really had to dig hard to find someone playing baseball in Israel,” says Lipetz. Those who did used oversized gloves and undersized bats and played on soccer fields, with soccer cleats. Lipetz played for a ragtag local youth team that managed to make a Little League World Series qualifier. “We lost 41-0 to Saudi Arabia,” he says. (The Saudi team typically consists of children of the American ex-pats living in the country).

He stuck with it, however. After completing his compulsory military service, Lipetz played college ball for San Diego Mesa College and UC San Diego. Now, he’s almost certainly the only athlete at the Games balancing Olympic baseball with booking touring musicians.

“I work hard, I put in long hours, but then I also get to turn off my phone and play a kid’s game,” says Lipetz. “I mean, most 42-year-olds have a family of two and a beer belly and the most baseball they have is playing with their kids or watching on TV. And I’m still playing baseball. In the Olympics.”

But Team Israel’s story isn’t immune to the real world: with the recent 11-day war between Israel and Hamas and rising Middle East tensions, the team heightened its security during a pre-Olympic barnstorming exhibition tour along the East Coast. But while many athletes around the world continue to speak out about important world issues, Holtz hopes his team actually keeps focused on the field. “All we’re doing is playing baseball, dude,” says Holtz. “We’re representing a country. We’re not into the day-to-day political s–t.”

The tensions in the world beyond the diamond have sparked constructive locker room conversations. “It’s an opportunity to educate or to give folks on the team a slightly different perspective, whether it’d be the Israeli-Arab situation, or religious versus secular Jews,” says Lipetz. “It’s really just an opportunity for dialogue, and that’s a big part of our gel, is this real interest and curiosity of players.”

On the field, team confidence has grown thanks to the presence of the ex-major leaguers; Lipetz singles out Valencia as a spark. “He brings just a whole new layer of just swagger,” says Lipetz. “And has been a big, big piece in changing people’s mindset in Israeli baseball. Not only from players but also from coaches and administrators. Saying hey, guys, f–k underdog s–t. We’re going to win a medal.”

Valencia’s swagger, it seems, has rubbed off. “You’re going to see a bunch of guys that are in different places in life all coming together for a common goal,” says Lipetz. “We truly believe we belong. We’re not just here to be pretty. We really feel like we have a chance to win.” 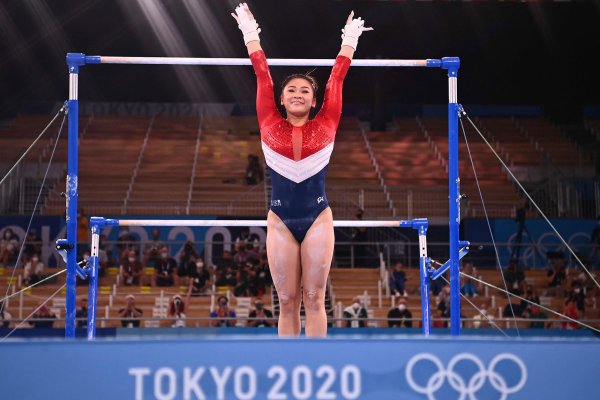 What Olympian Sunisa Lee Means to Hmong Americans
Next Up: Editor's Pick