“When you think of swimming, you think Australia and USA,” Caeleb Dressel told reporters in Tokyo. “The two powerhouses of swimming.”

And in the final day of competition at the Tokyo Aquatics Center, that proved true as every race was won by swimmers from the two countries. While the night for Team USA ended on a high note, with gold and a world record in the men’s 4×100-m medley relay, its total swimming medal tally of 30 at the Tokyo pool fell just short of its 33 from Rio, when Michael Phelps and Katie Ledecky alone contributed 11 medals to the haul.

Tokyo represents a transition year for Team USA swimming, as well as a crucible, as the first Olympics in modern history occurring in the middle of a pandemic. New leaders like Dressel emered as the foundation for a team of fresh faces including Lydia Jacoby, Regan Smith, Bobby Finke and Erica Sullivan. And while Rio’s team featured several swimmers racing multiple events, Tokyo’s team is slightly more specialized; Ledecky and Dressel were the only swimmers to win more than two medals.

With 11 teens, 10 of them women, the team was rich with promise but shallower in experience, which may have showed in the new mixed relay event on the next to last day of racing in the fifth place finish. There were flashes of brilliance over the nine-day meet, which hinted at the promising future ahead with a new batch of stars in the pool—Jacoby’s gold in the 100-m breaststroke, Sullivan’s silver medal finish behind Ledecky in the 1,500-m freestyle, and Finke’s stunning last lap in the 800-m freestyle that pulled him from fifth to first.

Finke’s gutsy swim, in fact, was a turning point after the team’s sluggish start in the first few days. “People don’t understand that there is momentum in swimming, and all it takes is one performance to really get that X factor, the extra sense of power—one performance can spark everyone,” says Nathan Adrian, five-time Olympic gold medalist, who is watching every race from his home in California.

Adrian says a number of factors might have contributed to the slow start, beginning with the flipped schedule that has swimmers racing in finals in the morning, and in qualifying preliminary heats in the evening. While most have said the schedule hasn’t affected them, the reality is that some have posted faster times in the evening than in the morning finals.

A final night of medals

On the final night of the meet, the Team USA cheering squad filled a section closest to the pool, with most of the U.S. swimming team, including Ledecky, in the stands, clad in navy USA T-shirts and waving fan sticks.

Dressel started out the session by winning the “splash and dash” 50m freestyle in his highly anticipated final individual race of the Olympics, His time of 21.07 set a new Olympic record, though he wasn’t first off the blocks; it’s Dressel’s third individual gold. Teammate Michael Andrew finished just off the podium in fourth. Then teammate Finke pulled off a repeat performance from his win in the 800-m freestyle and surged in the last 50m of the 1500m to grab the gold.

Then the U.S. women’s 4×100-m medley relay of Smith, Jacoby, Torri Huske and Abbey Weitzeil touched just behind Australia for the silver. Jacoby, whose goggles came off during the mixed medley relay the day before, swam an impressive breaststroke leg to bring the Americans from third to first; Huske kept the lead during the fly and Weitzeil was just out-touched at the wall during the freestyle leg by a surging Cate Campbell from Australia as the Australians set a new Olympic record of 3:51.60. Team USA came in second at 3:51.73 and the Canadians finished third. The U.S. has captured gold or silver in the event at every Olympics since 1960.

Then it was the men’s turn. The U.S. men also owned the world record heading into the event, set back in 2009 at the world championships. Swimming in lane 1 after qualifying 7th in preliminary heats, Ryan Murphy, Andrew, Dressel and Zach Apple proved to be the outside spoilers. Murphy was fastest off the blocks for the backstroke leg with an impressive 0.50 reaction time, and brought the U.S. to the wall first. Andrew dove in for the breaststroke and dropped back to third by the time Dressel took off for the butterfly leg. At 50 m, Dressel had brought Team USA to second, behind Team Great Britain, and pulled ahead in the next 50 m to touch the wall first. All Apple had to do was bring it home, which he did as the freestyle anchor. The win—and a world record time of 3:26.78—maintains the golden dominance of the U.S. men in the event; Team USA won every Olympics except 1980, which the U.S. boycotted.

The relay medals were a welcome boost on the final day, after a disappointing fifth place finish in the first-ever mixed medley relay the day before. “If you ask anyone on the relay, of course we’re not happy with where we finished,” said Dressel, who swam the anchor leg and pulled the team from 8th to fifth place. “Fifth place is unacceptable for USA Swimming and we’re very aware of that. The standard is gold, and that’s what we’re always shooting for in every race and we didn’t execute well. But we know what we need to do moving forward.”

The pandemic’s impact on USA Swimming

Heading into Tokyo, the pandemic posed some training challenges for swimmers. Lockdowns and infectious disease precautions meant many swimmers couldn’t train properly in the water for months, and still haven’t resumed full access to recovery, stretching and other facilities. It also meant no racing for most of the year, which robbed coaches and athletes of critical markers for determining how swimmers’ times stacked up.

Delaying the Games by a year also disrupted the normal routine of intense practice and tapering, a carefully orchestrated decrease in training before crucial meets, that are the guiding force of a competitive swimmer’s career. Dressel noted that he’s still not back at his usual gym for strength training, working instead in his trainer’s garage. Adrian says the lack of access of facilities could have other consequences as well, since it’s not just the pool that swimmers require to stay in top shape. “Normally you can show up early, take a nice shower, sit in the hot tub or stretch, work on your flexibility or do meditation,” he says, all important elements to the overall package of training. “With COVID-19 restrictions you can’t show up more than five minutes early, and you have to leave immediately after you’re done training.”

Simone Manuel, the 100-m freestyle gold medalist in Rio, was diagnosed with overtraining syndrome and attributes part of it to not recovering the way she normally does over the past year. Manuel fell short of a U.S. spot in the 100 m, and failed to qualify for the 50-m final in Tokyo. In ways both direct and indirect, says Adrian, “100%, absolutely COVID-19 had an impact.”

That impact wasn’t consistent around the world; some countries never closed their pool as states in the U.S. did, and while that strategy ran the risk of exposing athletes to COVID-19, their training never came to an abrupt halt as it did in the U.S. “It’s certainly something I think about when I look at the performance in these Games,” says Adrian. “Who knows if it’s a good thing or a bad thing, but it’s certainly a thing.”

The delay in the Tokyo Games means that the next Olympics is actually only three years away, and Ledecky for one is thinking ahead to training for 2024 in Paris. “I’m definitely going through to Paris, maybe beyond as well,” Ledecky said after her 800-m freestyle race. “I recognize how difficult it is to keep going back [to the Olympics], so I told myself before the race, soak it all in because you just never know if you’ll be back on the Olympic pool deck. I remember having that thought even in Rio.”

That seemed to be the theme of this Games—for veterans like Ledecky, who earned silver in the 400-m freestyle behind Australia’s rising talent Ariarne Titmus, and for Lilly King, who was the defending gold medalist in the 100-m breaststroke and earned bronze in that event and silver in the 200-m breastroke. The always outspoken King criticized media that characterized her finishes as somehow inferior to her results in Rio, calling the lack of respect for silver and bronze medalists “bullsh-t.” “You get to bring a medal home for your country and just because we compete for the United States and maybe we have extremely high standards for this sort of thing doesn’t excuse the fact that we haven’t been celebrating silver and bronze as much as gold,” she said. Of Team USA’s 30 medals at the pool, 19 were silver or bronze.

Ledecky is well aware that a new generation is ready to challenge her and she’s ready to fight for her spot on the next squad. “There’s never a guarantee when you’re competing against U.S. swimmers with how competitive our Trials are,” she said. And that’s a good thing.

The original version of this story misstated the competition in which Erica Sullivan finished behind Katie Ledecky for a silver medal. It was the 1,500-m freestyle, not the 800-m freestyle.

The original version of this story misstated the type of medal Simone Manuel won in the 50-m freestyle in Rio. She won silver, not gold. 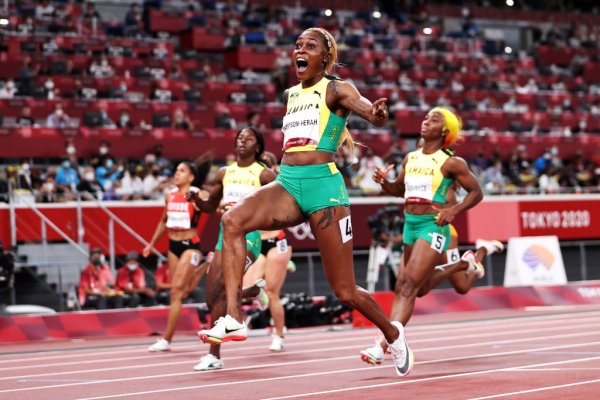