'I Choose to Do More.' Olympian Ashleigh Johnson Embraces Her Role As Water Polo Pioneer

When Ashleigh Johnson—the 6’1″ star goalkeeper for America’s “best-team-you’ve-likely-never-heard-of-but-totally-should”—was growing up swimming and playing water polo in Miami, she heard racist stereotypes about Black people and pools. Other kids, parents, even people she didn’t know would tell her they were surprised she could swim. Or ask her if Black people could float. She was sometimes the only Black person around the pool. “When you’re young, you don’t really have the protective mechanisms to not internalize that story,” says Johnson, 26. “I brought those questions to my mother, and she’s like, ‘O.K., that’s not real.’ But I still held on to it a little bit. Because those are my teammates, or maybe a coach I came into contact with, who would limit my belief in myself. And I had to learn you write your own story. And the things that make you different are your strengths.”

Johnson, who in Rio became the first Black women’s water polo Olympian in U.S. history, is bringing her standout goal-tending skills to a second Olympics. America’s dominant women’s water polo squad, which is already 2-0 in Tokyo, owns a record of 171-5 since December of 2015, and hasn’t dropped a game in the Olympics, World Championship, or World Cup in that span. Team USA won gold medals in London and Rio, and is looking to become only the third water polo team in history to win three straight Olympics titles (women’s water polo at the Games started in 2000—the Hungarian men won from 2000-2008, and the British men won golds from 1900-1920). In the Olympic tournament opener, the U.S. crushed Japan 25-4. Johnson’s length and quick reaction times are a big reason why; she stopped 15 of Japan’s 19 shots. (The U.S. held off China 12-7 on Monday).

“I’ll tell you what, these women are as badass as it gets,” Team USA’s coach, Adam Krikorian, said during a recent press conference in Tokyo. “I’ll put these women up against any team in the world in any sport.”

Johnson’s water polo journey began after her mother, Donna, bought a house with a pool in South Florida. She insisted that Johnson and her siblings—two older, two younger— take swimming lessons for their safety. Ashleigh and her younger sister, Chelsea, started swimming competitively in Miami. But they found the team aspect of water polo more fun. “While they swam, they could play water polo on Fridays, as a treat,” says Donna.

In high school, Johnson turned the treat into a full-time passion, and was recruited to play at Princeton, where became the school’s all-time leader in saves (1,362) and career wins (100). She was the first player in Princeton women’s water polo history to be named first team All-America. By the time she graduated in 2017 with a degree in psychology, she was already the starting keeper for the U.S. Women’s National Team, and won gold in Rio.

While the U.S. team is the favored to win another gold in Tokyo, Johnson says she’s playing for more than just another medal. A member of the Alliance for Diversity & Equity in Water Polo, she’s become a leader in efforts to diversify her sport. It won’t be an easy task: only 1% of NCAA water polo players are Black.

She’s all too aware of the ugly history of Jim Crow-era segregation in pools; Black people were barred from public and private pools, in part because many white people espoused a racist belief that Black skin would taint the water. Black swimmers were at times violently attacked for trying to enter a pool or even public beaches, such as during the Biloxi wade-ins. “I feel it and carry it with me every day,” says Johnson. “I know I don’t have to do much more than play my sport. But I choose to do more. It’s a responsibility. I choose to connect with other athletes who look like me in this space. Because I know how much opportunity there is now that is un-accessed. And I know the exclusion we faced in the past and that we continue to face today.”

As Johnson points out, the relative lack of access to swimming pools for Black and brown people that persists today is both a symptom of larger inequalities in America, and a serious public safety risk. The CDC statistics are stunning: Drowning death rates for Black people are 1.5 times higher than the rates for white people. Disparities are highest among Black children ages 5-9 (rates 2.6 times higher) and ages 10-14 (rates 3.6 times higher). In swimming pools, Black children ages 10-14 years drown at rates 7.6 times higher than white children.

“Swimming is a life saving skill,” says Johnson. “Pool access is still a place where exclusion occurs. I just hope to help change that.” To that end, Johnson, along with Chelsea—with whom she played at Princeton—ran a swim school for underserved kids in Miami for two years. After the Olympics, Johnson hopes to mentor similar swim programs and young swimmers and water polo players directly, while still speaking out on the urgent need for aquatic equality.

In the meantime, there’s that matter of the Olympic gold. Perhaps it’s time to give a badass team—and entertaining sport, with all the underwater kicking and such—it’s due. “There’s a lot to see here,” says Johnson. “And not much not many people know.” 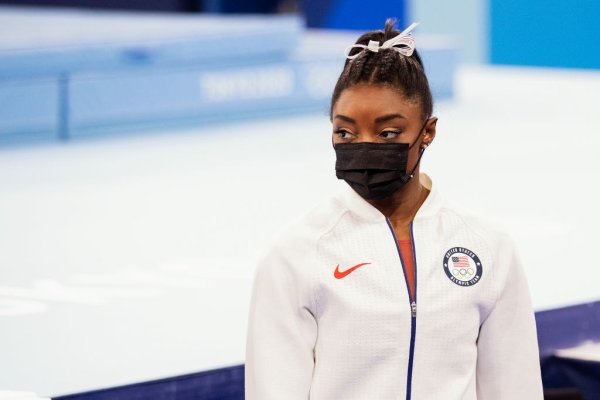 Why Simone Biles Pulled Out of Gymnastics Team Event
Next Up: Editor's Pick