The Team USA 3×3 basketball squad—featuring WNBA players Stephanie Dolson of the Chicago Sky, Kelsey Plum and Jackie Young of the Las Vegas Aces and Allisha Gray of the Dallas Wings—won the first-ever women’s gold medal in Olympic 3×3 basketball on Wednesday Night at the Aomi Urban Sports Park in Tokyo, getting by the Russian Olympic Committee (ROC), 18-15. China squeezed by France, 16-14, for the bronze.

From the outset, Team USA controlled the game; and showed off the balance of its attack. On the first U.S. possession, Gray took it hard to the basket to draw a foul. Plum hit lefty scoop shot; her favorite trick. The 6’5″ Dolson—who goes by the Instagram handle is “bigmamastef”—used her size to grab an offensive rebound and score. She finished with nine rebounds, each one seemingly more crucial than the last. The U.S. rushed out to a 12-5 lead, but Russia fought back, to put it to 15-12 with 1:30 left. After Plum missed a three-pointer with 1:16 left, Dolson positioned herself to grab another offensive rebound. She got fouled and hit two free throws to gave Team USA a 17-12 lead with 1:16 to go. In 3×3, a five-point advantage at that point in the game is enormous, as two-point shots are worth one-point and three-pointers worth two. After Russia cut it to 3, 17-14, with 44 seconds left, Dolson, of course, had another rebound and putback that essentially sealed the game.

“She’s very much the consummate teammate,” said Team USA 3×3 coach Kara Lawson after the game. “She feels a responsibility to do her part, for her team. And a big responsibility of a post player is to rebound. And she’s accountable for that.”

The Americans were more aggressive; they went to the foul line 11 times, converting eight free throws. Russia did not go the foul line once. The U.S. out-rebounded Russia 21-11.

After the game, a relaxed, smiling Dolson, towel hanging over her left shoulder, waved and smiled to the Team USA support staff. For the Russians, it was too much Big Mama Stef.

Two of Russia’s players, Evgina and Olga Frolkina, are twins. Tonight was their 24th birthday. Afterwards, a small group in the crowd sang to them. They’ll celebrate with silver.

Three-on-three—officially 3×3, with the “x,” in the Olympic lexicon—debuted as a quirky Olympic curiosity in Tokyo. Goofy music blared during games: few expect to hear Pat Benatar’s “I Love Rock and Roll” during Olympic action. The public address announcer also offered commentary. “Niiiice pass,” he said during the women’s final. Games are 10 minutes long: the team that grabs a rebound dribbles or passes out to the three-point line, then goes on the offensive attack. With the 12-second shot clock, no team can milk a time; a comeback always felt possible. The games were fast, furious, and fun, giving the Games a little playground vibe.

The games hinge on player movement and reward crisp passing and unselfish play. Clever screens lead to layups. The refs let a lot more bumping go. With fewer defenders clogging the middle, the flow is freer.

3×3 basketball proved it belonged at the Olympics. And the U.S. women took advantage. As of Tokyo’s Tuesday night, the sport gave the United States an 11th gold medal; the Americans trails only Japan (13) and China (12) in the race for most gold at the Games.

Before the victory ceremony, Dolson fist-bumped and chit-chatted with Yao Ming, chairman of the Chinese Basketball Association, while the four Russian players huddled closely together, seemingly devastated. Dolson placed the medals around the necks of her teammates on the podium; Gray draped Dolson in gold. “In 10 years we’ll look back and [say] ‘damn, we did that,’” said Dolson. “Hopefully we started something for USA Basketball when it comes to 3-on-3. Everyone knows us for 5-on-5. I think we started something special with this as well.” 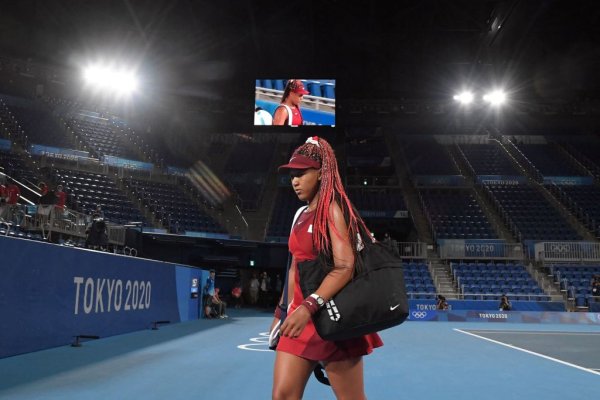 With Simone and Naomi Off TV, Who Will Be the New Stars?
Next Up: Editor's Pick