During the 4×400 relay at the Tokyo Olympic Stadium on Saturday night, Sydney McLaughlin, who set a world record in the 400-m hurdles earlier this week, took the lead in the first lap. She handed the baton to Allyson Felix, who won 400-m bronze the previous night to become the most decorated female track-and-field athlete in history. Felix kept that lead intact and passed it to Dalilah Muhammad, who ran the second-fastest 400-m hurdles time in history on Wednesday and is the defending world champion in that event. Still no threat to U.S. domination.

Muhammad made the final pass, to Athing Mu, the 19-year-old 800-m Olympic champion. Mu crossed the finish line. Team USA won by nearly four seconds. The Americans huddled up at the finish, a Tokyo track-and-field Dream Team in full.

And just like that, Felix is not only the most decorated female track-and-field Olympian ever, but she’s also the most decorated American track star ever, with 11 medals: seven gold, three silver, one bronze (Carl Lewis had 10; nine golds, and a silver) On the final night of competition at the track, Felix—who’s running in her fifth and final Olympics—earned a sendoff fit for her legend.

It almost wasn’t fair, really. Coming into this race, the Americans had already won every single women’s 4×400-m relay since 1996, in Atlanta. And now they were going to unfurl this all-star power? The Americans crossed the finish line in 3 minutes, 16.85 seconds. Poland took the silver medal, in 3:20:53. Jamaica won bronze with a time of 3:21:24.

Read more: Motherhood Could Have Cost Olympian Allyson Felix. She Wouldn’t Let It

Making the day even better for Team USA: following the women’s 4×400-m relay victory, the U.S. men’s 4×400-m relay team of Michael Cherry, Bryce Deadmon, Rai Benjamin and Michael Norman won the final race of the Tokyo meet, as they crossed the the finish in 2 minutes, 55.70 seconds, about a second-and-a-half ahead of the Netherlands, which finished in 2:57:18 for silver, and Botswana, which at 2:57:27 won bronze.

So finally, the U.S. men were able to secure their first sprint gold of the Tokyo Games. No one figured it would take until the last track race of the Olympics for this to happen. The U.S. men had high expectations coming into Tokyo; American men had the fastest times in the world in the 100 m, 200 m, and 400 m.

After the U.S. men failed to make the 4×100-m relay final, Lewis ripped the Americans on Twitter. “The USA team did everything wrong in the men’s relay,” Lewis said. “The passing system is wrong, athletes running the wrong legs, and it was clear that there was no leadership. It was a total embarrassment, and completely unacceptable for a USA team to look worse than the AAU kids I saw.”

Oof. At least the 4×400 team salvaged something.

The power of the 4×400-m relay women’s team, however, speaks to the larger success of the U.S. women here in Tokyo: the women have been winning a majority of the American medals, in both track and field and as an Olympic team overall. No American track foursome could possibly attract more attention. “It’s an amazing group of women right here,” says McLaughlin, standing with Felix, Muhammad and Mu after the race. “A once in a lifetime opportunity.” The group spanned generations: Felix is 35, Muhammad 31, McLaughlin’s birthday was Saturday—she’s 22—Mu is 19.

Read more: Allyson Felix Launches Her Own Show Company Two Years After Breaking Up With Nike

Felix made the point that this team is so talented, they won with ease despite no runner really claiming 400 m as a specialty. McLaughlin and Muhammad are hurdlers. Mu’s an 800 runner. Felix has switched to the 400 m later in her career; in her prime, she ran the 200 m and 100 m. Her individual Olympic gold, in London, came in the 200 m,

“The women showed up,” says Felix. “We’ve been showing up on the track, and off the track, in all the ways. I loved seeing it. Sitting back and watching each woman perform, it was inspiring. It’s, O.K., who’s up next? Kind of like a buzz.”

Felix leaves the Olympics a long way removed from the spring of 2019, when she struggled to return to the track after an emergency C-section while delivering her 2-year-old daughter, Camryn, in November 2018. At that time, she was also embroiled in a contract dispute with Nike; the company wanted to cut her pay, and decline to add a clause to future contracts tying pay protections to pregnancy. She publicized the conflict that spring: she left Nike for Athleta, a female-focused brand, that July. Nike changed its policies that August.

Many track fans thought she was done; they doubted she’d make the team in the 400 m at this year’s U.S. Olympic Trials. Maybe she’d make the mixed-gender relay pool: she ran in that event at the 2019 World Championships, winning gold. That event made its debut in Tokyo.

Instead, she was featured in a premier race on track’s final night of racing at the Olympic Stadium, joining some of the fastest women in the world on this all-star squad. And she proved far from an honorary, emeritus choice. “I am absolutely where I’m supposed to be,” says Felix. “There are so many women before me who had to stay silent about their fight. So for me to be able to step out; my daughter gave me the courage to do that … This has been going on for far too long. I hope that we’re really changing things now.”

Felix ends her career trailing only Paavo Nurmi, the 1920s distance runner from Finland—the “Flying Finn”— on the list of all-time Olympic medals for a track-and-field athlete. Nurmi: 12. Felix: 11. Her favorite moments of these Olympics? Standing on the relay podium, on top, on a super team. McLaughlin, Felix, Muhammad, Mu. “To be surrounded by these women in that moment is really special,” says Felix. She closed her eyes, taking it all in one last time; representing the strength and spirit of American women, on and off the track. 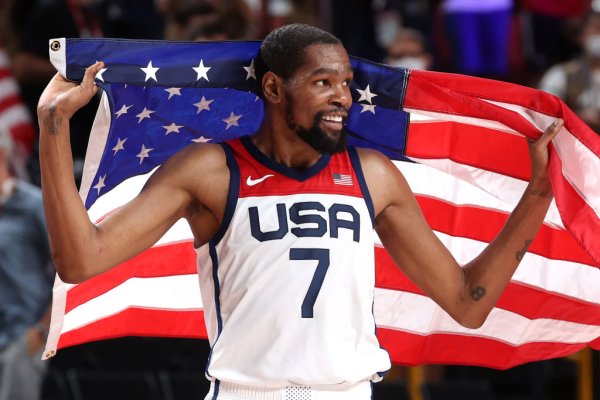 This Was No Team USA Men's Basketball Dream Team. But In Tokyo, It Demands Our Respect
Next Up: Editor's Pick