Simone Biles Returns to the Tokyo Olympics—With a Big Statement

It was a dramatic way to begin and end the gymnastics competition at the Tokyo Summer Olympic Games. In the very first event, the team competition, Simone Biles abruptly withdrew after completing only one vault, citing the toll on her mental health that the stress and pressures of competing at her second Olympics have taken.

Then, on the last day of gymnastics contests, Biles made a dramatic return, after scratching from the other events — the all-around and the event finals on vault, floor and uneven bars, all of which she qualified for — throughout the week.

More media were in attendance than at any other gymnastics event at the Ariake Gymnastics Center all week, all for the chance to see Biles in action. When Biles took to the beam, the crowd, as it were, went silent save for the soft background music in the building, only erupting in cheers toward the end of her routine with each completed skill. She didn’t end with the spectacular dismount that’s named after her — a double twisting double flip — that she’s been training and perfecting, choosing instead to do a double pike that she said she hadn’t done since she was around 12 years old, but it was enough for bronze. China’s Guan Chenchen and Tang Xijing earned gold and silver, respectively.

What matters more for Biles than the score or her placement was that she was competing at all. “I just did this for me and me only,” she said. “I wasn’t expecting to walk away with a medal, I was just going out there to do it for me, and whatever happens, happens.” When she pulled out of the team competition on July 27, Biles said “once I came out here — no, the mental was not there; I need to let the girls do it and focus on myself.” She said she’d been shaky all day prior to that competition, and couldn’t shrug off the nerves and anxiety like she normally does. As the week progressed, she continued to struggle mentally as she was evaluated by team and International Gymnastics Federation doctors. The following day, Biles also pulled out of the all-around competition and then successively withdrew from the event finals in vault, uneven bars and floor.

READ MORE: Simone Biles Has the Twisties. What Are They and Why Are They So Dangerous?

Another factor contributing to her unexpected decision — she shared on her social media that she is experiencing the twisties, a condition in which gymnasts inexplicably lose their bearings while tumbling in the air and can’t control how much they twist or how they will land. “Literally can not tell up from down. It’s the craziest feeling ever. not having an inch of control over your body. what’s even scarier is since I have no idea where I am in the air I also have NO idea how I’m going to land. or what I’m going to land on head/hands/feet/back…” Biles posted on her Instagram stories. She focused on competing on beam because she doesn’t need to twist in her routine, except for the dismount, which she changed.

Stress and the twisties form a tangled web of causation and contribution. Stress could contribute to the disorientation and balance anomalies of the twisties, or the twisties can descend out of the blue, and themselves spark anxiety and stress if gymnasts aren’t able to “feel” themselves in the air again for days, weeks or months. “I don’t know what went wrong,” she said of why her mind and body became disconnected. She noted that after the qualification round, when the US finished second to the team from the Russian Olympic Committee, “everybody was freaking out except for us [the team] that the Russians were ahead of us,” she said. There was a flurry of attempts to redirect training in reaction to the second place finish; during the next practice, “we went to floor and were were supposed to do leaps and turns, and ended up tumbling, and that’s when the wires just snapped,” she said. “Things were not connecting. People say it’s stress related but I could not tell you because I felt fine.”

For Biles, who performs some of the most challenging skills on floor and vault, the twisties can be extremely hazardous if she loses her bearings in the air and lands incorrectly. She said she has experienced the disorienting condition before, but it has “never come out on a stage this big; usually it’s just randomly during training.”

Sometimes the twisties resolve themselves as quickly as they appear; sometimes they take days or weeks to get better, and in some cases gymnasts never completely regain their equilibrium after experiencing them. “It’s different for every gymnast,” says Jordyn Wieber, a member of the 2012 Olympic gold medal-winning women’s gymnastics team, and now head coach of women’s gymnastics at University of Arkansas. “It depends on the athlete and the skills they are doing.” Biles said she still can’t twist, and wants to “puke every time I watch them do a double double, I cannot fathom how they do it.” Getting over the twisties involves going back to the basics and reteaching the body how to twist, mostly by building up to practicing twisting skills but on softer surfaces, or landing in foam pits so gymnasts to prevent injury. But such facilities aren’t available at Olympic training sites, so Biles worked at a gym in Tokyo so she could land on soft mats when she loses herself in the air and doesn’t land on her feet.

In order to compete on beam, Biles said she had to be cleared medically, which included evaluations after two sessions with a sports psychologist from Team USA. Biles also had to answer questions about her mental state, and said after one practice this week, “I had the biggest mental breakdown; I could not breathe.” She also revealed that while in Tokyo, she learned that her aunt back home had passed away, and noted that “people have no idea what we are going through and how we put our emotions to the side.”

Despite the challenges, beam holds special resonance for Biles, and because he didn’t have to twist on beam, Biles told teammate MyKayla Skinner, “beam is the one,” meaning the only event she felt she could compete in Tokyo. At her first Olympics in Rio in 2016, her routine in the event final was the only imperfect one, in her eyes, among her otherwise relatively flawless performances at those Games; she wobbled and nearly fell off but earned bronze. “I specifically want to come back to do a better job on beam,” she told TIME before she left for Tokyo.

And she did just that. Biles was solid throughout the routine, punctuating each skill with the confident thump of a solid landing on the beam. While she scaled back the dismount from the one that she performed at the recent U.S. national championships and Olympic Trials because of the twisties, she still performed a routine with a 6.1 start value, just under her normal one of 6.5.

It wasn’t exactly the performance that Biles likely had in mind as she was preparing for Tokyo last year, nor the one that she hoped would redeem her Rio routine. But given the week that Biles has had, it brought back the characteristic smile on her face that was missing on that first day of competition. And this bronze, she said, is “definitely sweeter than the Rio bronze medal because I did a good beam routine; it sucks that I had to downgrade my dismount but that was best for myself.”

As soon as she was finished, Biles shifted from competitor to the ultimate cheerleader to support teammate Sunisa Lee, who immediately followed. It’s a role Biles has come to embrace over the past week; she has been the loudest and most energetic supporter of teammates Lee, Jordan Chiles, Jade Carey and MyKayla Skinner as they continued in the Olympic competition without her.

Lee finished fifth in the beam final, with her shakiest performance all week, and barely held her balance after her side aerial combination. With a big hop to the side on her dismount, she earned 13.866 points and was off the podium.

Still, Lee’s performance in Tokyo was the pleasant surprise of the gymnastics events; she admitted that because of Biles’ dominance in the sport, coming into these Olympics, she and the rest of the gymnasts were competing for second. When Biles withdrew, gold was suddenly a possibility. Lee seized the moment and earned gold in the all-around, then captured bronze in the uneven bars final to add to her silver from the team event.

Despite the disappointing unexpected way her second Olympics turned out, Biles proved that she is more than her gymnastics, and more than a gymnast. At every Olympics, there is a lot of talk about greatness—greatness defined by athletic feats that test the limits of human ability, greatness defined by the strength of the human spirit to overcome adversity. But Biles forged a new way of thinking about greatness in elite athletes—one that doesn’t revolve so much around medals or accomplishments, but around the strength of character to admit weakness, and to take the path that’s less trodden and less predictable.

By withdrawing so suddenly from the team competition, Biles opened herself up to inevitable criticism for being selfish, and for putting herself above her teammates. Biles was unapologetic about her decision. “You have to put mental health first,” she said after the team competition, “Because if you don’t, and you’re not going to enjoy your sport or succeed as much as you want to. It’s okay to sometimes sit out the big competitions to focus on yourSelf and that shows how strong a competitors and person you really are, rather than just battling through it.”

U.S. swimmer Caeleb Dresssel, who also bore the weight of an entire nation’s expectations on his shoulders in the pool as a five-time gold medalist, admitted on NBC that the pressure “does pile up…I don’t know what is considered too much…I’ve had a couple of breakdowns.” But he stressed that every athlete responds to that pressure differently, and that no one should be judging athletes when they make decisions that they believe are right for them. “No one else’s opinion matters, because they’re not the one in her situation.”

Biles’ words, and more importantly her actions in Tokyo, could become a rallying cry for athletes who have wanted to raise awareness and attention about mental health, but have faced too much stigma and cultural and institutional inertia to make much of a difference. Like Naomi Osaka’s decision to opt out of press conferences, and ultimately the French Open earlier this year in an effort to protect her mental well being, Biles’ bold decision, as controversial as it was, will serve as an example of a prominent athlete putting mental health above medals, and peace of mind before persevering against all odds. “I think we have to focus on ourselves as humans, and not just athletes, because I feel like we lose touch with our human feelings sometimes,” she said. “Athletes kind of suppress their emotions and how they are feeling, but at the end of the day we are not just entertainment, we are humans.” As much as she has been a pioneer in her sport, pushing the limits of what gymnasts can do, in Tokyo Biles is embarking on new ground redefining what is expected of athletes and when too much is enough. Athletes are speaking up, loud and clear. Hopefully the rest of the world will start listening. 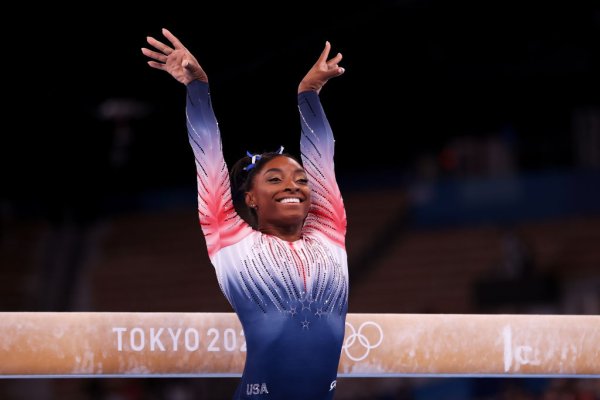