After her emotional gold-medal performance in the women’s all-around competition, Sunisa Lee continued her medal hunt with a bronze in the uneven bars apparatus finals.

Lee qualified second in the event, and was up first in the rotation of eight gymnasts. With teammates Simone Biles and Jordan Chiles in the stands cheering her on, Lee performed a less difficult version of the routine that earned her the all-around gold and helped the U.S. to win silver in the team event. With a few less connections, her routine still included release moves that require split second timing but earned a lower start value. Her score of 14.5 was enough to put her in third behind Belgian Nina Derwael and Anastasiia Iliankova of the Russian Olympic Committee. Lee is accustomed to making split second adjustments in her routines, and often dials the difficulty up or down depending on whether she needs the scores, and how she’s feeling on the equipment.

The story of the night, however, belonged to teammate MyKayla Skinner, who earned silver in the vault final after replacing Simone Biles when Biles pulled out of the event for mental health reasons. Skinner’s score of 14.916 from two vaults was enough to hold off Korea’s Yeo Seojeong, who performed her namesake vault and earned the highest score of the night, 15.333 for Korea’s first ever Olympic medal in gymnastics. The silver is sweet redemption for Skinner, who wasn’t invited to the 2012 Olympic Trials, was an alternate for the team in 2016, and persevered through bouts of COVID-19 and pneumonia before making the Tokyo team. Once here, she thought she was out of the event finals as well when two teammates scored higher in the qualifications—only the two highest scoring gymnasts per country can compete on each apparatus. When Biles withdrew, however, it opened up a spot for Skinner and she took the opportunity all the way to the podium.

Team USA's Mykayla Skinner competes in the vault event of the artistic gymnastics women's vault final during the Tokyo 2020 Olympic Games at the Ariake Gymnastics Centre in Tokyo on Aug. 1, 2021.
Loic Venance—AFP via Getty Images

Things didn’t go as well for Skinner’s teammate Jade Carey, who qualified second in the vault final and was expected to be on the medal stand; she is the silver medalist from the 2019 world championships. In the run up to her first vault, Carey appeared to trip before launching off the vault and to compensate once she was in the air, ended up downgrading the vault she had intended to perform to one with a far lower difficulty score. Her second planned vault came from the same family as her first one, which gave her an automatic two-point deduction and Carey ended up last. She’ll have another chance for a medal in the floor exercise final on Aug. 2.

Lee’s and Skinner’s medals give U.S. women’s gymnastics their third and fourth medals in Tokyo, with two more days of event finals to come. 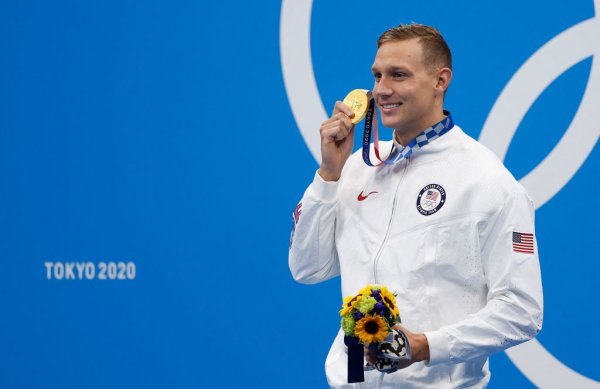