Simone Biles Has the Twisties. What Are They, and Why Are They So Dangerous?

After completing her first vault in the women’s gymnastics’ team competition in Tokyo, the reigning Olympic all-around champion looked worried. Simone Biles didn’t seem in pain, and wasn’t limping or grimacing. But she was seriously concerned.

Biles was supposed to do two and a half twists in the air after launching off the vault but once airborne, she lost her bearings and only completed one and a half. She immediately knew something was wrong.

And every gymnast can relate. Biles has since said that the combination of mental stress and pressure leading up to the Olympics have affected her confidence. But, more importantly, she felt a disconnect between her mind and body; her body was no longer doing what she wanted it to. Whatever the trigger, gymnasts call this the “twisties.”

“If you say ‘twisties’ every gymnast knows what you’re talking about,” says Jordyn Wieber, member of the 2012 Olympics gold medal team and now head women’s gymnastics coach at the University of Arkansas. “It’s something all gymnasts experience at one time or another.”

What causes the twisties?

What causes the twisties varies from gymnast to gymnast—sometimes, they can be triggered if the gymnast is training different twisting skills at the same time, for instance going back and forth between double twisting elements, one-and-a-half twists, and triples. Stress could contribute to them. Or they can just descend out of the blue for no reason.

For Biles, they occurred on the world’s biggest stage, and the look of concern everyone saw on her face makes sense. “She is doing some of the most difficult skills in the entire world, and if you’re not mentally in a great place, or have the twisties, then that can be a matter or life or death,” says Wieber. “One wrong landing, or landing on your neck, could be really, really dangerous.” Biles has four skills named after her on the vault, floor and beam, including the daring triple-twisting double back flip on floor exercise.

Biles has been answering questions on Instagram about the twisties, and it’s clear she is experiencing the classic signs. “Literally cannot tell up from down. It’s the craziest feeling ever, not having an inch of control over your body,” she wrote. “what’s even scarier is since I have no idea where I am in the air, I also have NO idea how I’m going to land. or what I’m going to land on. Head/hands/feet/back…”

She also shared a video of herself falling on her back after dismounting on the uneven bars following her withdrawal from the Olympics. “For anyone saying I quit, I didn’t quit. My mind & body are simply not in sync, as you can see here,” she wrote.

How Simone Biles could recover from the twisties

How do gymnasts shake the twisties? If they are at their home gym, they have the option of tumbling on a trampoline or landing in a soft pit or softer surfaces. But at the Olympics, there are no such options at the training or competition sites. Biles has been posting clips of her at a local gym in Tokyo with a soft pit of foam blocks where she has been practicing to overcome the twisties, but even she doesn’t know when they’ll resolve.

For Wieber, it took several days of landing all her flips in a soft pit. It didn’t help that her coach wasn’t sympathetic, and pressured her to “get over” whatever was keeping her from training properly. “Sometimes it takes stepping backward, resetting your skills, and working backward to work back up to where you were,” she says. “My coach wasn’t supportive, and got mad at me, which made it more stressful. I wasn’t feeling great about it, and I was feeling even worse because my coach was mad at me.

“Simone is getting the support and empathy she needs, and was able to pull back out of the event for the safety of herself and the betterment of the team, and that’s a really good thing.”

Even Biles can’t predict whether she will be able to compete in the event finals—she qualified for all four events: vault, floor, uneven bars and beam.

Sometimes the twisties resolve themselves after a couple of days, as they did for Wieber, sometimes it takes weeks, and sometimes gymnasts never feel the same in the air. “Whatever happens, whether she competes or not, we’re supportive of her,” says Wieber. “And we’re proud of her no matter what.” 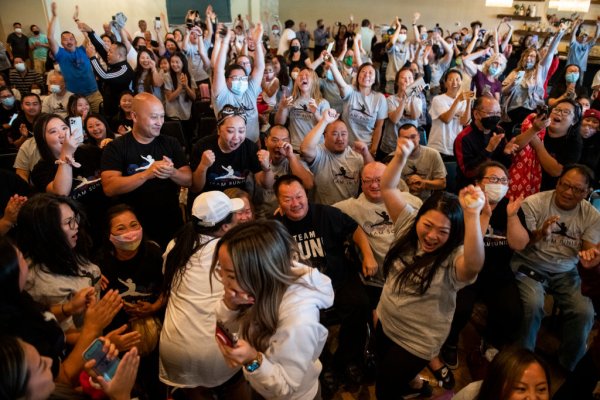 With No Spectators Allowed, Olympic Families Are Turning to Watch Parties
Next Up: Editor's Pick