It’s been a tough week for the U.S. women’s gymnastics team at the Tokyo Summer Olympic Games. Heavily favored to win the team event and the all-around titles, as well as collect up to half a dozen medals in the event finals, those expectations were thrown into a tailspin when defending Olympic all-around champion Simone Biles pulled out of the team competition first, then the all-around and all but one of the event finals for which she had qualified, citing mental health reasons. Biles has since also said that she’s experiencing the “twisties,” a condition in which gymnasts lose their orientation in the air and can’t control how they twist or land.

Biles’ exit opened up opportunities for her teammates, not to mention gymnasts from other countries who, for years since Biles has dominated the sport, have been competing for second and third places. Biles earned gold on the floor exercise at the Rio Olympics, and was expected to defend that title—she qualified second before pulling out. Teammate Jade Carey qualified third, and on the second night of event finals, nailed all four of her tumbling passes, propelling herself to stunning heights on her double-double in the second run. Her score of 14.366 was higher than the highest score in qualifying, and enough for gold. Carey inched ahead of silver medalist Vanessa Ferrari from Italy by earning more points for a more difficult routine. Ferrari won silver and Japan’s Mai Murakami and Russian Olympic Committee’s Angelina Melnikova, who is the Tokyo Olympics bronze medalist in the all-around, tied for third.

Carey’s gold is the first individual medal for the Arizona native, who trains with her father Brian. Carey’s gold was especially meaningful since she stumbled in the vault finals the night before; she tripped in running up to her first vault and had to downgrade her skill in the air in order to land safely.

“Coming back from a day like yesterday I’m really proud of myself for being able to put that behind me, and finish with probably the best floor routine I’ve ever done in my life,” she said.

To get to Tokyo, Carey took advantage of a new Olympic qualifying system instituted by the International Gymnastics Federation (FIG) for these Games—she participated in a series of competitions to earn a spot on the U.S. Olympic team. Her spot, however was a newly created nominative one, that allowed her to compete in the all-around competition but not in the team event. Her scores in the qualifying round of the all-around in Tokyo earned her one of the eight spots in the floor exercise final.

The U.S. women have two additional chances for medals in the balance beam final on Aug. 3 with both Biles returning to competition and Lee also qualifying.

Percolating under the surface of the happy medals ceremonies for the event finals, however, is a growing movement within the gymnastics community about rules that prevent gymnasts from warming up on the equipment minutes before they compete. While they have a warm up area behind the competition stage, once they are on the podium they compete “cold.” Oddly, that rule only applies to the event finals; gymnasts competing in the team and all-around events are each given a “touch” warm up on the equipment. The rule was discussed during a FIG meeting about a decade ago during which the warm up was eliminated because they “undermine entertainment quality” of the event. One strong justification? The four minutes it would take to give the eight gymnasts on each event a 30-second “touch” would slow the pace of the event and make it less entertaining for viewers of the broadcast.

The lack of a touch warmup potentially played a role in sub-par performances on nearly all of the event finals of the first and second of three nights of competition, including uncharacteristic stutters on tumbling passes from the men on floor, hiccups on pommel horse and scaled down routines from some of the women, including newly crowned all-around champion Sunisa Lee, on uneven bars. Most alarming, the lack of warm up possibly contributed to that dangerous glitch for Carey .

“I think that rule is so dumb,” said Lee after she competed in the uneven bars final, after skipping some of her more intricate and points-getting connections because she didn’t feel comfortable to execute them in the moment.

That sentiment was echoed by gymnasts in the vault event as well. “I feel it would definitely be nice [to have a warmup],” said US gymnast MyKayla Skinner, who won silver in the event on the first day of event finals and was first to go in the lineup. “If we’re able to touch the equipment before we went, I would definitely like that for sure.”

Vault bronze medalist Yeo Seojeong, who won Korea’s first gymnastics medal, agreed. “Warming up first makes us more comfortable and it’s less stressful so I think having it would be better,” she said.

Whether that changes will be up to FIG, but there is certainly a movement bubbling up pushing for it. Biles’s coach Cecile Landi tweeted after the vault and uneven bars finals that “After today I hope that the @gymnastics realizes how important the touch warmup is for the safety and well being of the athletes!” Lee’s coach Jess Graba agreed, noting that “you could really get hurt doing this. The routines are too difficult. The skills are too high-level. Every one of those kids fought. That wasn’t their normal routine.”

On the second day of event finals, the gymnasts still struggled, especially the first ones out of the gate — Russian Olympic Committee’s Viktoriia Listunova stepped out of bounds on her first pass and fell forward on her second tumbling run. 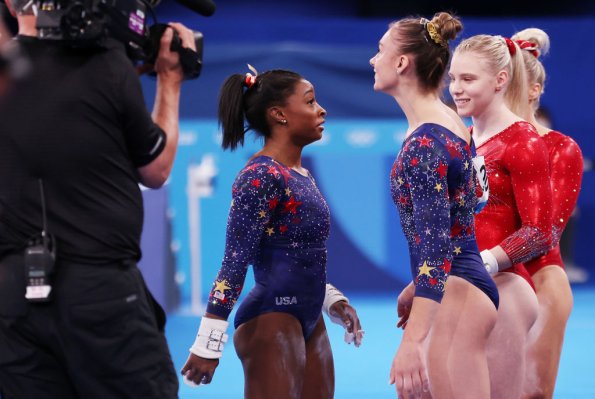 This Is Who Will Replace Simone Biles in the Olympic Gymnastics All-Around Final
Next Up: Editor's Pick