The women’s gymnastics all-around final at the Tokyo Olympics was the coronation everyone expected it to be. Only the star was different.

After Simone Biles withdrew from the competition to prioritize her mental well-being, American Sunisa Lee stepped into the gaping void left by her iconic teammate and stepped up to win her first gold medal and Team USA’s fifth straight in the event. With a steely calm, the 18-year-old Minnesotan leaned on her consistent execution and a spectacular uneven bars routine—the hardest of any gymnast competing—to triumph in a competition that until days before had seemed a foregone conclusion.

The absence of the defending gold medalist opened the door for the rest of the field, including Americans Lee and Jade Carey, who replaced Biles. “We were all coming in to compete for second place,” said Lee. “I just had to switch gears. I feel like the whole season I was second to her, so when the opportunity was there, I had to do what I normally do and tried not to focus on that because I knew it would get in my head and I would probably do bad.”

It was an opportunity that neither Lee nor any of the other 23 athletes in the field saw coming. Biles has been so dominant in the sport for so long—she has not lost an all-around competition since 2013—and was expected to win her second-consecutive gold medal in history-making fashion, with the four challenging skills that are named after her and possibly a fifth that would have been if she pulled it off in Tokyo. After vying for second for most of her career, Lee saw the chance and seized it, putting in solid, if not perfect routines on vault, uneven bars, beam and floor to just pass Rebeca Andrade of Brazil, who earned silver, and Angelina Melnikova who won bronze (Carey finished eighth).

The first Hmong-American to compete for Team USA, Lee is now the first Asian-American to win the coveted all-around title. Her victory is particularly resonant for the Hmong community in Minnesota, for whom Lee has been a source of pride and possibility for the next generation.

Sunisa Lee of Team USA poses with her gold medal after winning the Women's All-Around Final on day six of the Tokyo 2020 Olympic Games at Ariake Gymnastics Centre on July 29, 2021 in Tokyo, Japan.
Laurence Griffiths—Getty Images

Lee’s gold is all the more meaningful given the tumultuous few days that she and her teammates experienced in Tokyo. After starting the team event on July 27, Biles realized it would be unsafe to continue competing because she didn’t feel mentally ready. Lee and teammate Jordan Chiles stepped in without notice and managed to pull off routines that were strong enough to win the U.S. the silver medal.

“That’s a sign of a really strong team,” says Jordyn Wieber, a member of the 2012 gold-medal winning U.S. women’s gymnastics team and the head women’s gymnastics coach at the University of Arkansas. “They could have easily freaked out, and felt overwhelmed with the sudden changes. But it looks like they said no problem, we’ve got your back. It’s amazing they were able to do that for Simone.”

Read more: Young Gymnasts Are Taught That Their Bodies Are Not Their Own. Simone Biles Refused to Accept That

Lee admitted that the dynamic of competing in the all-around without Biles—who usually deflects the heaviest burdens from her teammates—created its own challenges. “I was starting to put a little too much pressure on myself, knowing that Simone was gone and I felt like people were putting that pressure on me that I had to come back with a medal,” Lee said. “My teammates told me to just go out there and not worry about anything else, so I tried to focus myself on what I normally do when I compete at my best.”

In some ways, says Wieber, Biles’ dominance over the past few years may have indirectly helped Lee to prepare the wildly unexpected developments this week. “Sunisa and the others having to compete against Simone these past few years has really helped them to prepare for this moment right now,” she says. “Having to always have that standard set so high, Simone has prepared them mentally and physically.”

It also helped Lee that she got her usual pep talk from her dad, John, earlier in the day. “He told me to do what I normally do, just do my best,” she said. “He told me not to focus on the scores or anything like that because in their hearts I was already a winner and that they are just so proud of me no matter what.”

John Lee has always been his daughter’s biggest supporter—traveling with her to meets and building a beam in the backyard so she could practice. In 2019, just before Lee left for national championships, John fell while helping a neighbor trim a tree, and needed surgery while Lee would be away competing. He urged her to go, and an anxious Lee asked her coach to update her on the operation in between her sets. On the floor, she revealed none of her inner turmoil and performed well enough to finish second behind Biles. John’s surgery was successful, but he remains partially paralyzed and in a wheelchair.

John Lee (C), father of Sunisa Lee of Team USA, reacts after her scores posted for the balance beam in the Women's All-Around Gymnastics Final on day six of the Tokyo 2020 Olympic Games at a watch party on July 29, 2021 in Oakdale, Minn.
Stephen Maturen—Getty Images

Lee has said she sees the small victories her father makes in starting to move his arms and hands, and applies those lessons to her own gymnastics challenges, reveling in the small successes and not allowing herself to get frustrated or discouraged if the bigger dream—say, of competing at the Olympics—seems too distant to reach. John likewise looks to his daughter for inspiration when he feels discouraged by his physical therapy; seeing her gradually improving in gymnastics by diligently training skills over and over, never giving up in frustration, is helping him to do the same in his rehabilitation.

Lee relied heavily on that support over the past two years, which have tested her Olympic dream. After her father’s accident, the family faced more tragedy when an aunt and an uncle with whom Lee was close died because of COVID-19. Then, Lee injured her ankle, and only recently recovered enough to compete at nationals and the Olympic Trials.

All of which makes this unlikely gold medal all the more sweet. “These past two years have been crazy with COVID and my family and everything,” Lee said. “This medal means a lot to me, because at one point in time I wanted to quit, and I didn’t think I’d ever get here. So there are definitely a lot of emotions and I’m super proud of myself for sticking with it.” 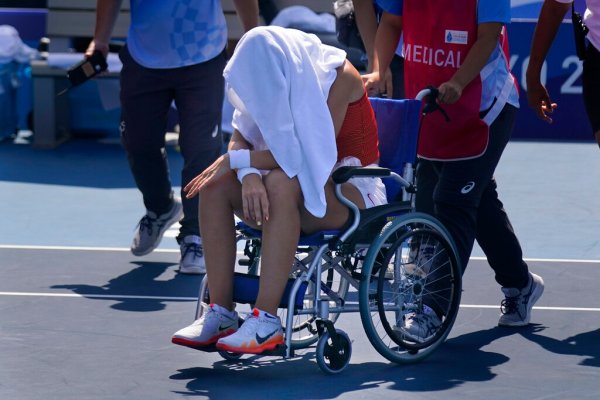 How Tokyo's Brutal Heat Is Taking a Toll on Athletes
Next Up: Editor's Pick