Before this week, many people knew Katie Ledecky as one of the most dominant names in swimming for the last decade. So they might have been surprised by the success of Australia’s 20-year-old Ariarne Titmus during the 2020 Tokyo Olympics, who has now bested Ledecky twice to snatch gold medals.

In Tokyo, Titmus’ rivalry with Ledecky has been one of the most captivating parts of the Tokyo swimming program. The rivalry between the two star swimmers dates back to the 2019 world championship, when Titmus became the first woman to beat Ledecky at the international level. They’ll have one more chance to race in Tokyo, this time in the 800-m freestyle on July 31. She isn’t the favorite this time, however. Ledecky is undefeated in the 800 m, holding the fastest 24 times in the event’s history as well as the world and Olympic records, which she set during her winning race at the 2016 Rio de Janeiro Olympics.

Titmus, who grew up in the small island territory of Tasmania, is at her first Olympics, but she has already snagged two golds for her country. First, she won the women’s 400-m freestyle against Ledecky on Sunday, marking the American’s first Olympic loss in an individual event. (Her coach Dean Boxall also grabbed headlines for his wildly enthusiastic reaction to her win. Titmus said “he’s very passionate.”)

On Monday, Titmust then trounced Ledecky again, in the 200-m freestyle; Ledecky finished fifth, while Titmus set a new Olympic record, at 1:53.5 seconds.

Ledecky rebounded the next night in the women’s 4×200-m freestyle relay. Team Australia, which Titmus led off, was widely expected to take gold and break the world record. And while they were faster than the previous world record—set by Australia in 2019—so were Team USA and China, who took silver and gold in the race, respectively. Key to the U.S. second-place finish was Ledecky’s anchor leg; she chased down a tremendous gap to overtake Australia (and almost caught China). “Everyone counted us out,” Ledecky said in a poolside interview with NBC.

They are not the first American-Aussie matchup to garner widespread attention, either. This year, besides the Ledecky-Titmus matchup, U.S. swimmer Caeleb Dressel was also matched against his regular opponent Australian Kyle Chalmers, the reigning Olympic champion in the men’s 100-m freestyle. When the long-awaited race finally came to pass in Tokyo after much hype, it was Dressel who claimed the top prize. The two countries both field top swim teams year after year, and are accustomed to facing off during championships. Famously, Michael Phelps was often pitted against Aussie swimmer Ian Thorpe during their Olympic careers. (Thorpe has five Olympic golds, the most golds ever for an Aussie competitor at the Games.) Though ultimately diplomatic, Thorpe was not bullish in his view of Phelps’ quest for medals, and Phelps was known to choose his events in order to face off against the rival.

The relays have long been a place where the team rivalries come to the fore. Back in 2000 during the Sydney Olympics, the Australia-Team USA matchup during the men’s 4×100-m freestyle relay became particularly heated after U.S. swimmer Gary Hall Jr. suggested the Americans would “smash [the Australians] like guitars” in the water. That did not end up being the case, and Hall was—some believe unfairly—villainized for his remarks. Twelve years later in London, the Australian team came up short with their fewest medals in two decades; in the relays, often their dominant event, the men took home only a bronze in the medley. But that disappointing result seemed to fuel the Australian squad, who rebounded in Rio—and have remained the ones to beat in Tokyo too.

The rivalry though comes with a lot of mutual respect. “I wouldn’t be here without her,” Titmus said of her opponent Ledecky after her first Tokyo win. “If I didn’t have someone like her to chase, I definitely wouldn’t be swimming the way I am.” Ledecky shared a similar appreciation for Titmus after the 400 m in Tokyo; the two chatted in the pool afterward, on affable terms. “She said she couldn’t have done it without me, and I could say the same about her,” Ledecky told NBC after the race. “She’s really pushed me. I think it’s great for the sport.” 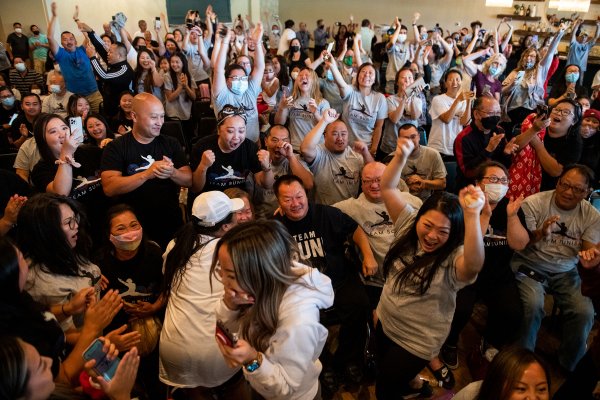