Lilly King is becoming more than a talented breast stroker and outspoken advocate for drug-free sports. Turns out the native Hoosier is also pretty good at helping teammates find their fastest times.

King and teammate Annie Lazor finished second and third in the 200-m breast stroke at the Tokyo Aquatics Center on Friday. King, who is the defending champion from Rio, was out quickly off the blocks, turning ahead of the pack at the first 50-m and maintaining that lead until the final turn. She couldn’t keep off South Africa’s Tatjana Schoenmaker, whose blistering last lap propelled her to a new world record of 2:18.95. It’s the second individual medal for Schoenmaker, who collected silver in the 100-m breast stroke behind another American, newcomer Lydia Jacoby, and ahead of King.

Racing the 200m breast stroke final together was especially meaningful for King and Lazor; Lazor’s father died suddenly in April apparently due to COVID-19. Lazor’s father had been the inspiration for her swimming career, and she was devastated, unable to bring herself to continue training. King drove five hours from her home in Indiana to where Lazor lives in Michigan, and made a promise to Lazor’s mother: She would do everything she could to help Annie get to the Olympics.

And she made good on that, showing up every day during those first tough months to make sure Lazor went to practice, serving as her therapist, training partner, emotional punching bag when Lazor needed it, according to a profile by ESPN.

It was an especially deep emotional valley for Lazor. The 26-year-old had already been making a last effort to resurrect a swimming career that she had thought was over when she failed to make the 2016 Olympic team. She had put the pool behind her, and began working at the University of California, Berkeley athletics department, including with the school’s swim team. In 2018, playing with the idea of returning to competitive swimming, she went back home and tested the waters, literally, at Indiana University—where King was a student following her Rio success.

With King’s encouragement, Lazor’s times continued to improve. This time, at the 2021 Olympic Trials, she made the cut, with King. The two continue their journey together through training camp and into Tokyo, where both made the final.

King hadn’t promised a medal, but she might as well have. In fifth after the first 100-m, Lazor surged in the last half of the race, pulling herself to third by the last two turns to earn bronze.

And by the looks of it, King is enjoying sharing the podium in Tokyo more than she enjoyed the solo glory of her medals in Rio. 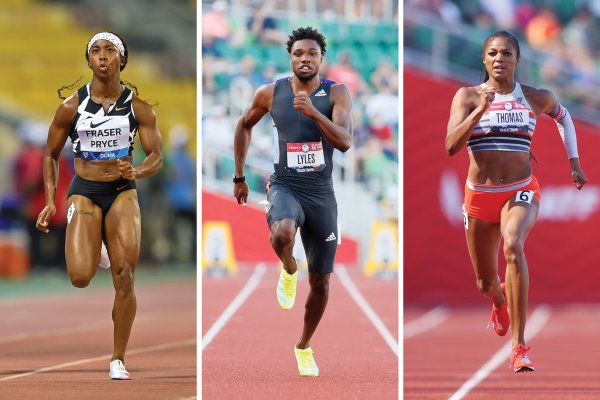 The Biggest Track and Field Races to Watch at the Tokyo Olympics
Next Up: Editor's Pick