Team USA Just Had Its Biggest Day Yet in the Pool. And Caeleb Dressel Clinched the Marquee Gold

Leading from the start, Caeleb Dressel of Team USA earned his first individual medal, a gold, in the 100-m freestyle at the Tokyo Aquatics Center on Thursday.

Dressel was second off the blocks with a reaction time of 0.60, just behind South Korea’s Hwang Sunwoo. From there, he never gave up the lead, holding off Kyle Chalmers of Australia, who earned silver, and Kliment Kolesnikov of the Russian Olympic Committee (ROC) who touched the wall third. Dressel’s time of 47.02 seconds set a new Olympic record.

Dressel’s gold was the second of the session for the U.S., after Robert Finke touched the wall first in the 800-m freestyle. Regan Smith and Hali Flickinger also swam for silver and bronze, respectively, in the 200-m butterfly, and the U.S. women captured silver in the 4x200m freestyle relay, just narrowly missing gold after a spectacular anchor swim by Katie Ledecky to move the U.S. up from third, and ahead of Australia. The thrilling relay finish capped off the biggest day at the pool for Team USA—and the most successful since Sunday, when the team clinched six medals.

For several minutes after his race, Dressel straddled the lane marker and simply processed that he had just become an Olympic champion. “I don’t want to surpass any moment just because I’m used to it,” he said afterward. “I don’t want to be immune to the feeling racing offers me. I wanted to take all of that moment and enjoy it. I don’t want to ever take it for granted.”

Dressel is a proud Florida native; the unmissable sleeve of tattoos that cover his left arm is a homage to his home state and includes oranges, orange blossoms, magnolias and three “spirit animals” all native to the state—the bald eagle, bear and alligator. And of course, on the other arm he’s inked the Olympic rings, from his last trip to Rio in 2016.

Four years ago, he finished sixth in the 100-m freestyle; in Tokyo he set a new Olympic record on the way to winning gold. Dressel won his first Tokyo gold on Monday, with the 4×100-m freestyle relay.

He’s been referred to as the next Michael Phelps because he could take home as much hardware as Phelps did in Beijing—eight golds—if he swims in the relays that are available to him. At the 2019 World Championships, Dressel became the first swimmer to win eight medals at a single championship meet. Dressel has downplayed the comparisons, noting that it’s not fair to Phelps. But while Dressel doesn’t swim as many diverse individual events as Phelps, he’s dominated the shorter freestyle and butterfly events, smashing Phelps’ world record in the 100-m butterfly at the 2019 World Championships. Dressel will have a chance to drop his own record time even further in that event on July 31 in Tokyo.

Tokyo is Dressel’s second Olympics, and already he’s taking a leadership role for Team USA after being voted one of four captains. “I have a lot of pride as team captain,” he said during training camp in Hawaii before the Games started. “I want to make sure I do it correctly and don’t rush my way through.”

Dressel said he looks to Nathan Adrian, Olympic gold medalist in the 100-m freestyle, as a role model. “When I was climbing the ranks of the swimming world, I thought I was supposed to hate the guy,” he said, “because we both swam the 100-m free and he was faster than me. But when we started competing at the same level, I realized this is a true leader. I don’t dislike the guy, I want to be like this guy. He left behind, figuratively and literally, big shoes to fill. I hope to carry into this meet and share with the guys what Nathan left behind.”

Dressel is following in Adrian’s footsteps in other ways as well. Adrian got married in 2018, and recently became a father. Dressel married his high school girlfriend on Valentine’s Day, but never missed a practice despite the joyous occasion. He admitted that the past year, when pools and gyms locked down, training was more challenging. And without a normal schedule of racing, it was even harder to find motivation. “There were points I didn’t know what I was swimming for,” he said.

The stress of competing in Tokyo, under severe restrictions because of the pandemic, also weighed on Dressel, just as it has for other prominent athletes including gymnast Simone Biles, who decided to withdraw from the team and all-around gymnastics events to protect her mental health. “The first couple of swims [in Tokyo], I was not handling the pressure well,” Dressel said. “I was turning pressure into stress. Pressure is fine, there’s nothing you can do to avoid it. I know my name is thrown out there a lot, and I understand it. I could care less — it’s something that comes with sports when you are at the top of the podium. It’s up to me to figure out whether I turn that into stress.”

The lack of fans has also made the races in Tokyo lack the urgency that meets normally do, though teammates in the stands have been trying to make up for the missing spectators with noisemakers and encouraging cheers. Still, it always helps to have reminders of home and Dressel always has one in his swim bag behind he blocks—a blue bandana belonging to his former high school teacher, who died of cancer in 2017.

Speaking about his win Thursday, Dressel got emotional. “It’s a really tough year; it’s really hard,” he told NBC. “So to have the result show up, it really came together so I’m happy.” 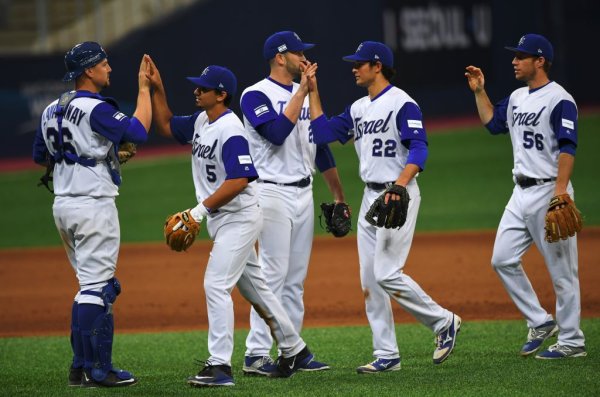 How Israel's Baseball Team Made It to the Tokyo Olympics
Next Up: Editor's Pick