Caeleb Dressel of USA during the 100m Butterfly semifinal on day seven of the swimming competition of the Tokyo 2020 Olympic Games at Tokyo Aquatics Centre on July 30, 2021 in Tokyo, Japan.
Jean Catuffe—Getty Images
By Alice Park/Tokyo

The 100-m butterfly has been largely dominated by Michael Phelps at the Olympics since 2004. Now it’s Caeleb Dressel’s turn.

Dressel won the race in a blazing 49.45 seconds on Saturday in Tokyo, nabbing his third gold medal of the Summer Games and breaking his own world record by .05 seconds.

Keeping to himself in a corner of the ready room before the race, Dressel didn’t sit in the chair reserved for him, choosing to stand off to the side. A self-described “loner” and “weirdo,” Dressel prefers not to talk to many people at meets, but talked to himself as he walked onto the deck to cheers from his fellow Team USA swimmers. It’s an approach that’s worked well for him. The only swimmer who was under 50 seconds in qualifying, Dressel led the race from the start, holding off rising star Kristof Milak of Hungary, who won gold in the 200-m butterfly earlier in Tokyo. Dressel, however, owns the 100-m distance, and popped off the blocks with one of the fastest reactions times of .60 seconds. Dressel hit the wall at 50 m in 23.0, and continued his blistering pace through the finish.

Since he’s arrived in Tokyo, Dressel has been closing in on his own world record, which he set at the 2019 world championships; he set an Olympic record in the semifinals in Tokyo and shaved 0.03 more off that time to set the new world record in the final. It’s the first world record for an American swimmer in Tokyo, and only the second individual world record set at this Olympics (the other was set by South Africa’s Tatjana Schoenmaker in the women’s 200-m breaststroke).

Dressel now owns the five fastest times in the event. That’s no small feat given that the record he broke in 2019 belonged to Phelps, who was the first to break the 50-second barrier at the world championships in 2009, which Phelps swam in a type of fast suit that is no longer allowed in competition. Dressel’s time puts him in the company of other great American champions in the event, from Phelps to Ian Crocker, Pablo Morales and Mark Spitz, each of whom contributed to faster and faster races that set the stage for Dressel’s impressive time.

The gold is the second individual one for Dressel, who also claimed the 100-m freestyle title in Tokyo. His third gold medal in Tokyo came as part of the 4×100-m freestyle relay team alongside Blake Pieroni, Bowen Becker and Zach Apple.

Dressel has one more individual final, the 50-m freestyle, on the last day of the swimming competition in Tokyo. In his semifinal for the event, which he swam not long after winning the 100-m, Dressel recorded a time of 21.42 seconds—the fastest of any swimmer. 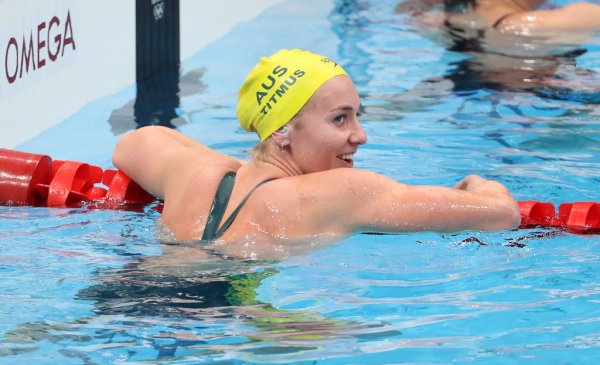 Ariarne Titmus Is the New Name to Know in Women's Swimming
Next Up: Editor's Pick