Lydia Jacoby is used to quizzical looks and puzzled curiosity. You’re from Alaska, and you swim?

Yes, yes she does. And she is now an Olympic gold medalist in the women’s 100-m breastroke. When most of the world was focused on one of the most contentious rivalries in the pool in recent Olympic cycles—the one between Jacoby’s teammate Lilly King and Russia’s Yuliya Efimova—Jacoby slipped in and bested them both for gold in her debut Olympic finals appearance on Tuesday. King earned bronze behind South Africa’s Tatjana Schoenmaker.

King led the race through the first half, but Jacoby made up the difference in the final 50 m, after clocking a final split of 34.21 to King’s 34.83 and Schoenmaker’s 34.81. The three women qualified for the final with the three fastest times, but Jacoby was the only one to shave time off her semifinal race to touch the wall first.

Jacoby’s win marks the first individual gold for the U.S. female swimmers in Tokyo, in what for Team USA has been a disappointing four days of competition—with favorites falling short of expectations. Earlier in the same session, Regan Smith, who set an Olympic record in qualifying with the fastest time in the 100-m backstroke, couldn’t keep up that pace and earned bronze, while Ryan Murphy, gold medalist from Rio in the 100-m backstroke, wasn’t able to defend his title and finished third despite holding both the world and Olympic records in that race. The day before, Katie Ledecky missed Olympic gold for the first time ever in an individual race; she was bested by Ariarne Titmus of Australia.

Jacoby, 17, was only 12 when she watched King win gold at the 2016 Rio Olympics. “Lilly is a huge role model for me,” she told reporters after her win. “I watched her swim in Rio so it’s incredible to swim next to her and do this together.” Jacoby’s parents started her at the local swim club when she was six, as a safety precaution since they lived in a maritime community and were often on sailboats. For a 17-year-old, Jacoby sounded like a veteran when talking about the pressure of swimming at the Olympics. “You just have to remember at the end of the day it is just another meet,” she said after making the final. “You just have to remember to keep your head on your shoulders and not get too carried away with the idea that you’re at the Olympics.”

Jacoby certainly did that, even if she couldn’t do it with her family in the stands. In fact, had it not been for COVID-19, Jacoby herself had planned on being a spectator with her parents in Tokyo, as just another Olympic fan. “A year ago I didn’t have a real shot at making the team, so my family and I had tickets for Tokyo and we were going to come to watch,” she told reporters. Her parents, Richard and Leslie, self-described “boat people” who ran sightseeing and tour trips from Seward, moved with Lydia to Anchorage last year when COVID-19 restrictions eased up since pools there opened before the only one in Seward did. Jacoby said she and her family stayed in an apartment of a fellow swim team member for a few months until the pool in Seward reopened.

Jacoby plans to return to Seward, where she’ll not only get a hero’s welcome but where she has another important task to complete—graduating with her high school class next spring. 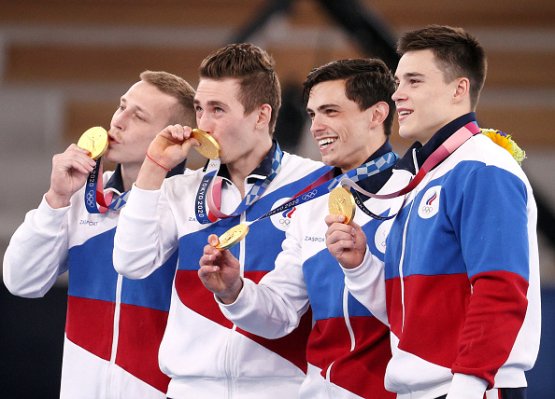 What is the ROC? Why Russia Can't Compete At the Tokyo Olympics
Next Up: Editor's Pick