On her most challenging day of competition in a career filled with them, Katie Ledecky thought about her grandparents.

The 24-year-old American with a record haul of world championship medals had just finished a disappointing fifth in the 200 meter freestyle at the Tokyo Olympics. In about an hour, she was due to dive back into the pool for the final of the 1,500m freestyle—a grueling test of stamina and resolve. Somehow she had to wash off the loss and reset for the mile-long swim to come.

“I went blank a little, and was trying to find some positive things to get me moving forward,” Ledecky said. “The easiest thing for me to think about are my grandparents; my two grandmothers are still alive, but we lost my two grandfathers quite a few years ago. It makes me really happy to think about them; they are the four toughest people I know. I knew if I was thinking about them during the race I wasn’t going to die, and that I wasn’t going to have a bad swim and they would power me through.”

They did. Behind a relentless pace, Ledecky earned the first Olympic gold in the women’s 1500m, which was making its debut in Tokyo, and was even able to share the glory with teammate Erica Sullivan, who surged to finish second for silver. And three days later, Ledecky defended her 800m freestyle title in decisive fashion, staking out an early lead and never relinquishing it even as budding rival Ariarne Titmus of Australia closed in.

Ledecky didn’t reach the heights in Tokyo that she did at the 2016 Games in Rio—Titmus thwarted her defense of gold in both the 200m and 400m freestyle—but her performance was spectacular nonetheless. Her final haul of four medals—gold in 1,500m and 800m, silver in the 400m and a silver medal as part of the 4x200m freestyle relay in which Ledecky swam a masterful come-from-behind anchor leg—cement her as one of the greatest and most consistent swimmers in history.

Embracing the pain of training for gold

Born in Washington, D.C. and raised in suburban Maryland, Ledecky made her Olympic debut at 15, at the 2012 London Games. She stunned the swim world by winning gold in the 800m, setting a fast pace that has become her trademark in distance races. In the years that followed, Ledecky continued to carve seconds off her previous personal best times, most of which were world records, and for a while, she set new records each time she dove into the pool.

“I approach each race with the belief in myself that I can swim a best time, and that’s pretty darn tough,” she said in Tokyo after her gold medal swim in the 1500m. “It’s a real blessing and a curse that I have that attitude, because it’s not easy when your times are world records in some events, and you can’t just keep dropping time with every single swim. It’s what’s served me well over the years, and why I’ve broken so many world records and swum so many fast times. But it’s also a really hard attitude to maintain for nine years.”

Ledecky admits that her perspective has changed some, even if her ultimate goal — to swim faster each time she races — remains the same. “I’ve learned a lot over the years; my times may not be my best times, but I’m still really, really happy to have a gold medal around my neck.”

Ledecky said she is already looking forward to training for the next Olympics, in Paris in 2024, taking a little solace in the fact that the pandemic delay means the next Games will be in three years instead of four. She could make history there as well if she wins a fourth 800m title.

Distance is a particular strength. Ledecky is able to push through longer swims, at a more rigorous pace, better than anyone else in the world. “She embraces pain,” says Gaines. “I think she embraces the monotony of it all. She pushes herself where it’s not sustainable for other swimmers.” Where most swimmers aren’t ready to commit to the time and effort it takes to swim the mile, Ledecky says she took to it almost immediately. “I was probably 12 or 13 when I swam my first mile,” she said in Tokyo. “I realized I was pretty good at it, and enjoyed it more than some of my peers. So I kind of owned it, and continued to race it and continued to enjoy it. I like the work you have to put in.”

Like all swimmers, Ledecky struggled to find pool time when the world shut down due to the coronavirus pandemic. When the Olympics were postponed by a year, she was in her last year at Stanford University, so she made a pact with teammate and Stanford alum Simone Manuel to stay in California and find ways to continue training together, including getting some laps in at a backyard pool. “It bonded us,” Ledecky said of the experience.

The extra year also gave Ledecky the opportunity to finish the credits she needed to earn her degree, and she took classes in public health during which she learned more about the challenges of preparing for threats like COVID-19. Her swimming schedule prevented her from attending her own graduation in June, however, since she was in Omaha, Neb. earning a spot on the Olympic Team. She did bring her cap and gown to Trials, and donned them for pictures to celebrate at the most appropriate place for her — on the pool deck.

Training for the Olympics and managing her academic commitments hasn’t been easy, particularly over the last 18 months. Deciding to remain in California meant that Ledecky wasn’t able to see her parents since she left for school in 2019, before pandemic lockdowns began. She admits that the year has taught her to be more adaptable. “I think I’ve grown a lot, both in and out of the pool. I’m experienced now and just know how to manage both the physical and mental aspects of the sport. If I have a bad practice, I don’t let it get to me.”

That expanded perspective was on display after Ledecky failed to reach the podium in the 200m. “I don’t want anyone to feel sorry for me, or feel silver or any other medal besides gold is a disappointment or anything. I would much rather that people be concerned about people who are really truly struggling in life,” she said. “It’s a true privilege to be at the Olympics, let alone an Olympics in the middle of a pandemic. So many people in the world are going through a lot of hard things; I’m just lucky to be here.” 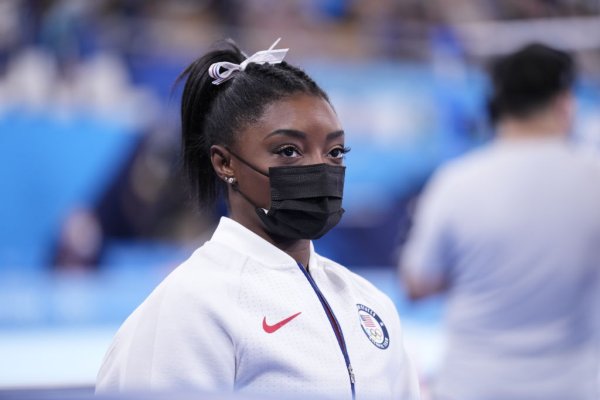 Simone Biles Pulls Out of Olympic Vault and Uneven Bars Finals
Next Up: Editor's Pick