Why Kyrsten Sinema Could Control the Future of the Filibuster

Senator Kyrsten Sinema at the Capitol, in Washington on May 26, 2021.
Graeme Sloan—Sipa USA
By Philip Elliott

Kyrsten Sinema came to Washington back in 2012 as something of an unpredictable player. A former Green Party spokeswoman, anti-war activist and progressive state legislator, Sinema first won her U.S. House seat by trashing the place she sought to serve—seldom a bad strategy. Once here, she actually acted on her anti-establishment impulses. She broke with her party Leadership on an array of issues, including twice voting against Nancy Pelosi’s bid to lead the Democratic Caucus and siding with some of President Donald Trump’s most aggressive proposals to crack down on immigration.

Sinema’s personal quirks are legendary: she leads bipartisan fitness classes for her colleagues, her bold fashion sense is unmatched in the stodgy Capitol and, per a Pew analysis, she was the first lawmaker to list “none” as their religion. In 2018, she became the first woman elected to the Senate from Arizona as well as the first bisexual to serve in the Upper Chamber, where she moved from Pelosi’s problem-child to Democratic Leader Chuck Schumer’s nagging headache.

Well, all that zaniness is looking less appealing now that she—and perhaps she alone—controls what her fellow Democrats can get done between now and the 2022 elections. While the equally-vexing-to-progressives Sen. Joe Manchin of West Virginia is more often the subject of ire for his pursuit of bipartisanship and his tight grip on the middle of the road, Sinema is the one who actually stands today to tank the agenda.

It is now fairly obvious to anyone watching Congress that Senate Minority Leader Mitch McConnell isn’t going to drop his favorite tactic of delay and deny using the filibuster, a procedural hurdle demanding almost every single piece of legislation clear the 50-50 Senate with 60 votes. This means big-ticket items like Biden’s infrastructure push, voting-rights protections, policing reform, LGBTQ protections and limits on guns need GOP buy-in to pass in normal course.

Some progressive Democrats have been arguing since this Congress convened that getting rid of the filibuster will be the only way to get anything done between now and the midterms. It long seemed a secondary concern for most lawmakers. But the appetite for ditching that 60-vote threshold seems to have grown since Senate Republicans deployed the tactic to shut down a proposal to form a bipartisan independent commission to probe the Jan. 6 insurrection at the U.S. Capitol. Republicans, sensing the political cost the findings could bring on them, stood against it. Separately, Sinema didn’t join her other Democrats in supporting the measure; she was away tending to a personal matter, her aides said.

But Manchin—who for months has staunchly defended the filibuster as a check on hot passions—was furious about the Republicans’ move. “I never thought I’d see it—up-close-and-personal—that politics could trump our country. And I’m going to fight to save this country,” he said after the Jan. 6 commission vote failed. While Manchin isn’t yet ready to offer a eulogy for the filibuster, you can see in the West Virginian the same level of frustration with Washington that threatened his decision to seek a second term in 2018. Back then, a clearly reluctant Manchin sniped at his party’s Leadership team, begging him to run again, that “this place sucks.” In a sign that Manchin is open to hearing the arguments, he’s sitting down next week with the NAACP to hear, in part, why the filibuster needs to be dealt with so the Senate can pick up legislation to undo what state lawmakers are deploying to limit voting rights.

Sinema, meanwhile, is on a roadtrip with Republican Sen. John Cornyn, a member of McConnell’s true braintrust and one of the 35 Senators who voted to filibuster the Jan. 6 commission. Standing beside him on Tuesday in Arizona, Sinema offered up a tortured history of the filibuster and said it was a tool for comity and compromise. “The filibuster was not created to accomplish one thing or another. It was created to bring together members of different parties to find compromise and coalition,” she said.

Twitter immediately called-out Sinema for her errant history, noting that the founders didn’t picture a two-party system, the filibuster didn’t make an appearance until 1837 and the tool found utility most often for those in the political minority to block civil-rights legislation. A columnist with the biggest paper in her state said she spoke “daftly” about the tradition.

History matters, but right now the future matters more. And if Democrats stand any chance of passing the big items on their agenda, they’re going to have to end the filibuster or avail themselves of the budget trickery of reconciliation that could give them another chance to make law with just a simple majority. Even then, both options require Manchin, Sinema and fellow Arizona maverick Sen. Mark Kelly to stay in line. All three are fastidious in not appearing to be party stooges. A naked political move would foul their identities back home and make it that much harder for them to win their next election. Manchin is openly speaking against using reconciliation to get an infrastructure plan across the finish line, though some of his colleagues think he may be able to be persuaded.

Democrats are unlikely to get any credit with voters for half-passing ambitious measures. They have to have something to show for winning the White House and both chambers of Congress. That means right now, Sinema has every Democratic Senator’s electoral future in her grip. They can’t do a big spending plan without unified Democratic support to slide it in through a loophole, and they can’t change the rules without her, either.

Which is why she can pretty much do what she wants. And she is. For all the time spent commenting on her colorful wigs, perhaps her bold politics have always mattered more. 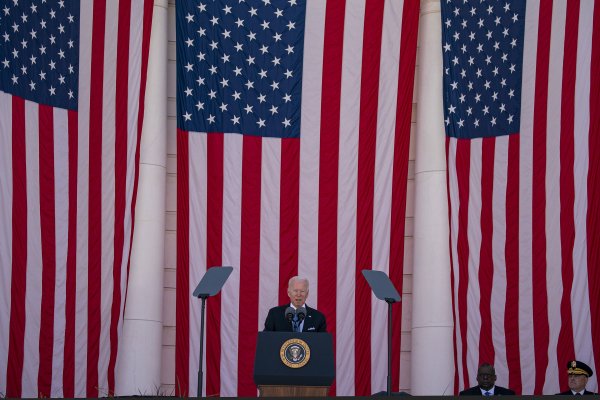 Joe Biden Is Chasing a Bipartisan Infrastructure Deal That May Never Materialize
Next Up: Editor's Pick