Why Democrats Seem Ready to Go It Alone

If you’ve been more than a little confused about how Joe Biden is chasing the latest pandemic-relief plan, you’re in good company.

The President’s fellow Democrats have teed up a $1.9 trillion package that tracks with the White House’s priorities. It could become law without a single Republican vote if Democrats in control of the House, the Senate and the White House deploy a complicated legislative backflip known as “reconciliation.” Action could come with the barest of majorities, 50 Democratic Senators plus tie-breaking Vice President Kamala Harris. Republicans have warned that such a move, so early in Biden’s term, would sour relations going forward and undercut Biden’s campaign message of compromise and unity.

Biden, for the most part, has seemed open to it going either way. The President truly believes the relationships he built over decades in the Senate could help him find common ground. But he also has vivid memories of 2009, when he and President Barack Obama worked with Democratic leaders in Congress to chase Republican support for big-ticket items like the Recovery Act and the Affordable Care Act. In the end, the Recovery Act won over three Senate Republicans and Obamacare got zero support from Republicans in the Senate.

So watching Bidenworld move in his first full week in office was like trying to make sense of smoke — always moving, never tangible and ever open to interpretation. At one point, top adviser Cedric Richmond said Biden wanted “to work with both sides in order to help the American people.” Then Biden economic adviser Brian Deese was saying the White House was reviewing the GOP offer before adding, “We have a real urgency to act and to act comprehensively.” Or as press secretary Jen Psaki put it: “You take your guidance from the person you work for, and for me, that’s President Biden. He starts every day thinking, ‘I want to be able to work with Democrats and Republicans, and there’s a reason they should work with me.’ … None of us think Republicans are just going to lay down and work with us overnight. But we feel like we have to try.”

Did that clear everything up?

Meanwhile, Biden’s allies on the Hill were moving ahead yesterday as though the decision to use reconciliation was a foregone conclusion, even as Biden himself sat down to talk with a coalition of 10 Republican Senators who drafted their own, scaled-back version of a relief bill. Schumer in interviews has said Democrats won’t make the same mistake as they did in 2009 and 2010. Pelosi told reporters last Thursday that, while she hoped for bipartisan support, “should that be needed, we will pass a reconciliation bill.”

Today things are starting to look a little more clear. Biden’s meeting last night with lawmakers in the Oval Office — his first known such meeting since he became President on Jan. 20 — produced no negotiated compromise. The White House said Biden heard out his Republican friends, who in their own statements called the session “a very productive exchange of views.” But it didn’t yield concessions from Biden or pledges of support from Republicans. And Biden didn’t hide the prospects of a go-it-alone posture from his Republican friends.

Which means it now appears Democrats will move ahead without Republican buy-in. It won’t do much for the display about Biden’s bipartisan credentials when he eventually builds a presidential library. Then again, Americans who are facing expiring unemployment benefits, are under the threat of eviction, are checking every day to see if it’s their turn for a vaccine or are struggling to keep their businesses’ doors open probably won’t notice. 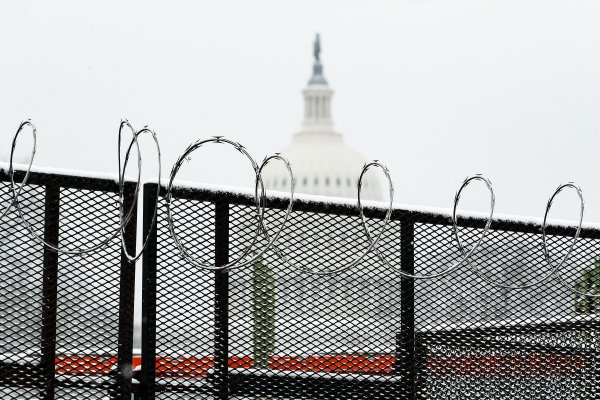 The Tense Winter Capital Trump Left Behind
Next Up: Editor's Pick