As the clock ticked past 2 a.m. this morning, Sen. Dan Sullivan stood before a mostly-empty Senate chamber. Ostensibly the Alaska Republican was talking about the pending tech bill, but those watching in their offices knew their colleague’s filibuster was about everything but a tech bill on the floor. “We must face this challenge with confidence and strategic resolve,” Sullivan droned on as he took his turn gumming up the legislative process in a 19-hour filibuster. Just so long as facing that challenge wasn’t investigating the failed insurrection at the Capitol on Jan. 6.

Senators today rejected a planned commission to study what led to a mob storming the Capitol while trying to overturn the results of the 2020 election. The Democratic-led House had already passed its version of a bipartisan commission. But Republicans in the Senate would not go along with this because it likely would have codified that the deadly protest on Jan. 6 was a direct result of then-President Donald Trump and his promotion of The Big Lie—the false claim that he’s the rightful President instead of Joe Biden. In the end, only six Republican Senators joined Democrats in asking for the inquiry, short of the 10 required to break a procedural roadblock.

The commission to track down an official accounting of what happened on Jan. 6 now seems beyond resuscitation. Its cause of death? Partisanship.

“The Republican Party minority just mounted a partisan filibuster against an independent commission to report on Jan. 6,” Senate Minority Leader Chuck Schumer said today on the Senate floor, his contempt hardly hidden. “Out of fear or fealty to Donald Trump, the Republican minority just prevented the American people from getting the truth about Jan. 6.” Moments later, he sent a letter to Democratic colleagues vowing to find answers, perhaps through a special select committee.

It’s a partisan jab, for sure. But he’s also not wrong. For the last 24 hours, moderate Republicans have been begging their colleagues to step up and make a stand against The Big Lie. Over lunch yesterday, Sen. Susan Collins of Maine challenged her colleagues to do their jobs and push ahead with an inquiry. Not one to leave that unanswered, Senate Minority Leader Mitch McConnell rose immediately to offer his rejoinder: any panel looking at Jan. 6 would be bad politics for their party, which stands to make inroads next year when one-third of the chamber is on the ballot and the map seems to favor the GOP.

It’s a cold political calculus in light of the terror he and his colleagues experienced less than five months ago. During normal times, the certification of the Electoral College vote on Jan. 6 would have been a bland vote of process, one that merited a handful of words buried in a few newspapers, and unremarked-upon in most others.

But Trump insisted on convening a rally a mile away from the Capitol that day. He whipped his supporters into a frenzy and urged them to march upon the Capitol. Once there, they breached security barricades, bashed windows and ransacked offices. They were unsuccessful in overturning the election but they shook many assumptions about government and its durability.

The ensuing riot sparked Trump’s second impeachment. He survived, of course, because Republicans feared crossing him. In the months that followed, his grip on the Republican Party has not faded. He is still a galvanizing force inside GOP politics and he seems to remain a king-maker inside the party. Which means the default position of ambitious Republicans will be to fall in line with what Trump demands. And, at least at the moment, that means burying their heads in the sand and ignoring the mob that tried to overtake the Capitol just a few months ago. It seems insane that a Republican Party that campaigned so hard on law and order in 2020 now is trying to mute a probe into a mob, but it’s that same party that needs the mob’s mascot to survive primaries. 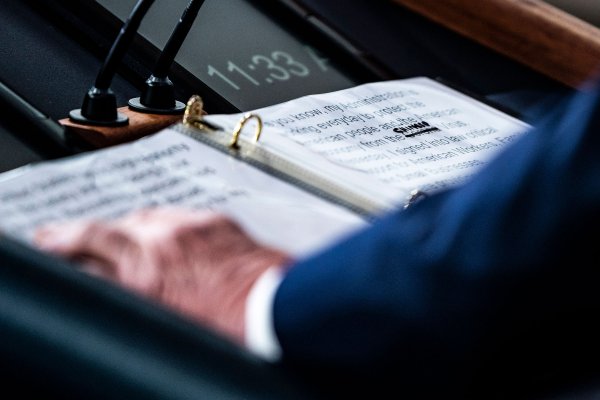 How Trump Muddled the 'Lab Leak' Debate
Next Up: Editor's Pick