Non-Discrimination Protections Are Hugely Popular — Yet Far From Law

If you watched last week’s Senate Judiciary Committee hearing about an anti-discrimination bill to protect the rights of LGBTQ Americans, you’d have come away thinking the series of safeguards being discussed were deeply divisive and threatening to the lawmakers’ constituents, and especially young women who play sports. But a new poll of more than 10,000 Americans, released today, shows just the opposite: that non-discrimination policies are overwhelmingly popular by a 3-to-1 margin.

The study, from the non-partisan Public Religion Research Institute, asked voters about “laws that would protect gay, lesbian, bisexual and transgender people against discrimination in jobs, public accomodation and housing.” Among all respondents, 76% said they supported such proposals, up 5 percentage points from when PRRI first asked the question in 2015. Among Republicans, that number is up 1 percentage point from 2015, to 62% support.

And on the question of same-sex marriage, for the first time, a slim majority of Republicans, 51%, support those rights as decided in 2015 by the Supreme Court, according to the survey.

To help explain the numbers, I spoke with Natalie Jackson, PRRI’s director of research. Below is our phone conversation about the Equality Act, passed through the House on Feb. 25 and now under consideration in the Senate. We discussed some religious groups’ opposition to it on the grounds they’d have to work with individuals they consider sinful, and how protecting women’s sports is the new reason conservatives are opposing protections for transgender individuals. Our conversation has been edited for clarity and length.

PE: I’m looking at these numbers and I find them fascinating. What is your top line coming out of this?

One is that, even among groups that we would expect and who are more hesitant to support LGBTQ rights issues, we show a lot of support regarding the non-discrimination protections. It’s rare to see a policy issue with this much support from the general public, including 60 or more percent of Republicans and white Evangelical Protestants.

The secondary one is that same-sex marriage has continued to gain support and evolve. For the first time we have more than half of Republicans supporting that. Just the trajectory of opinion on that issue in the last 15 years continues to be incredibly quick.

Let’s unpack that a bit because there are two issues here. Non-discrimination policy is not the equivalent of marriage equality.

Right. There is an additional layer to the marriage equality that gets tied up in it and that makes support a little bit lower and that is the religious issue. Particularly for Evangelical Protestants — and particularly the white Evangelical Protestants — there is a strong message within their religion that homosexuality is a sin and it should not be condoned in a marriage, which is viewed fundamentally as a religious covenant. Whereas for other groups without, that religious layer support is a bit higher.

I think the non-discrimination protections is free of that religious element, with the exception of the religious liberty argument. But in general, it’s easier for people to agree that this group should not be discriminated against than it is to say we should allow marriage.

I was surprised that Hispanic Catholic numbers were so high in terms of support for these rights. What is happening there?

It’s striking that the majority of Republicans now favor marriage equality. What happened there?

It is quite a transformation. We have the chart of the last 10 years and Republicans started at 31% in favor [or same-sex marriage equality] and moved up a full 20 points. So that is a remarkable increase, but the increase has happened across the board. Democrats have increased by 18 points in the same time period. Independents are up 25%. To some degree, it’s the entire society moving together.

One natural inclination might be to attribute it to the fact that the Supreme Court has ruled on this and made it the law of the land, but we actually don’t see a jump in 2015 when that happened. It’s been a bit of just more acceptance and more openness in society, as well as I think there is a powerful element to knowing people who are LGBTQ. We know the proportion of Americans who identify as LGBT or Q has been increasing. So we have increased awareness of those people and increasing numbers. When you know someone who fits into that category, that moves you considerably because it’s no longer abstract.

So why is the Equality Act not the law of the land? If the numbers are where you say they are, why is it good politics to be a hold-out on this?

The short answer is because Republicans are not necessarily voting on these issues. There’s a significant disconnect. There’s always a disconnect between what people think on any given issue and what they’re voting on. There’s also a disconnect between talking about the opinions of all Americans, which is what we’re doing here, and those who actually turn out to vote. The short version is that when we ask people, what issues are most critical to them, unfortunately, LGBTQ issues are not high on that list.

It also gets back to the theory of representation. What does it mean to represent people if they think this way? Are you obligated to follow that? The arguments against the Equality Acts that we’re seeing are not based on we should be able to discriminate against these people. They’re based on things like religious liberty. And we’ve seen quite a few attacks on transgender people. That seems to be an area where they’re focusing and opinion is very nuanced.

When you lump transgender rights in with gay rights, things get muddy pretty quickly. Is my view accurate?

So when you ask the question as we do — do you think lesbian, gay, bisexual, transgender people should be protected from discrimination? — the answer is yes. When you dive down into things like transgender sports, it does get muddy very quickly.

I remember after Obergefell, a lot of activists were worried about a backlash and the pendulum swinging away from LGBTQ rights. Has the swing away ended?

We never really saw that much of a pendulum swinging backlash in our data. We have seen pretty consistent upward trajectory. [3.1 and 3.2 when live] I’m personally a little bit skeptical that we saw much of a backlash.

I was thinking about the spate of bathroom bills that got pretty nasty, pretty quickly.

The bathroom bills have somewhat gone away, but they’ve been replaced now with the sports issues with the thin veil of women’s rights laid over it.

Polling — not future-telling — is your area of specialization, but looking ahead, what does this conversation look like in five years?

At the federal level, at the national level, I think we will see our policies and our public opinion continue to move in a more positive direction for LGBTQ rights. I would anticipate some of these trend lines generally staying about the same. At some point, we are going to see kind of a top-off. The support for same-sex marriage over the last 15 years has continued on roughly the same trajectory. I think at some point that is going to kind of plateau. I don’t have a good feel for where that might be, though. It might be somewhere around where the non-discrimination protections have kind of been, which is that 75% to 80% range. That’s generally about as much public favor as we get for any issue. 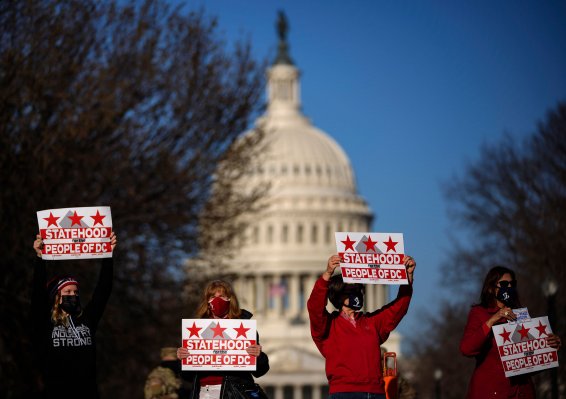