Before heading to my first BTS concert, I was told to bring earplugs. It was 2018, and L.A.’s 20,000-person Staples Center was sold out—and certain to be a deafening scene. But as the seven members of the world’s most popular group launched into their hard-stomping single “Idol,” I ripped the cheap wads of foam out of my ears, surrendering to the music. No matter that the lyrics were almost entirely in Korean, of which I don’t speak a word; no matter that I hadn’t memorized the fan chants; no matter that I was there alone, with no one to share in my joy. “Idol,” the final single and cherry on top of the K-pop group’s exuberant Love Yourself album cycle, is the kind of song you can’t deny. It is hyper-confident hip-hop with a house-music heart and veins of traditional Korean instrumentation. But I wasn’t thinking about its complex musical heritage at that moment; the song just made me grin and rise up to dance.

I’m not the only one on which “Idol”—and BTS’ extensive catalogue of music, including this summer’s infectious hit “Dynamite,” all leading up to the Nov. 20 release of their new album Be—has that effect. Since their official 2013 debut, artists RM, J-Hope, Suga, Jimin, Jung Kook, V and Jin have been seriously prolific, especially by Western standards: in seven years, they’ve jointly released seven official studio albums (three in Japanese), six extended plays and five compilation albums with their eighth official studio album out this week. “Dynamite,” their first English-language song, topped charts globally, even while the music industry at large floundered in the midst of the pandemic.

All of this output makes for an eclectic and multilayered collection that sample styles ranging from trap to R&B and pop to soul. (And that’s before adding thoughtful solo mixtapes from RM, J-Hope and Suga.) 2020’s record-breaking Map of the Soul: 7 and “Dynamite” ensured that BTS would be known as one of the most ambitious contemporary musical acts in the world. Not only are they K-pop’s preeminent ambassadors, they have also built a labyrinthine alternate universe around their music videos, lyrics and artistic choices, layered with sociopolitical connotations. In a system of artistic production traditionally associated with constraints, BTS has broken free with music that pushes boundaries—of genre, expectations and message.

The BTS journey begins with 2013’s “No More Dream.” More than a single, it was a statement of purpose: unlike other glossy idol groups, the underdog septet, who were created and are managed today by an impresario outside of Korea’s Big Three production houses, explored darker themes over old-school hip-hop beats. (This fall, their management company went public, and now rivals its more traditional competitors in size and value.) They kicked off a trio of projects—2 Cool 4 Skool, O!RUL82 and Skool Luv Affair—that looked inward, venting frustrations about the constricting experience of South Korean teendom. Lyrics complained about having to spend hours at the library and early music videos telegraphed institutional angst, whether mopping a grim-looking bathroom or fighting in front of lockers.

Like K-pop pioneers Seo Taiji and Boys before them, they drew on classic hip-hop as a backbone, and embellished singles with guitar riffs for a punk flourish. Particularly engaging are the boys’ early “skits”—interludes of casual chat between members—and cyphers, tracks on which the three rappers could flex. “We’re just a normal group of boys from humble backgrounds who had a lot of passion and a dream to be famous,” RM told me in an interview in 2017. “Our lyrics deal with real issues that face all humans: choices in life, depression, self-esteem. And the fans know that we are there for them, and they are there for us.”

That compact became stronger with BTS’ 2015 breakthrough, The Most Beautiful Moment in Life. Singles “Dope” and “Run” emphasized BTS’ rebellious side. Meanwhile, rap track “Ma City” played with jazz, and “Burning Up (Fire)” leaned in to clubby EDM. The bouncy “Silver Spoon” was deceptively catchy: over a trap beat, it critiqued South Korea’s class-conscious, inequitable society. BTS may be classified as K-pop by default, but the group perhaps shares more genetic material with contemporary hip-hop than with pop or any geographic association. Their music is full of bravado, rich with social commentary and capable of metabolizing many styles and influences.

In another divergence from typical boy-band practice, the individual musicians are given ample space to stretch. On the band’s next full album, 2016’s Wings, each member explored a sonic territory of his own—V’s neosoul, Jimin’s fluid R&B—on solo songs like “Stigma” and “Lie.” Tropical house, the sound of the moment, filtered into other tracks. But it was the hit single “Blood Sweat & Tears” that announced them as a force, for their musical intensity, conceptual originality and viral choreography: the K-pop triple threat.

As a whole, the tracks on Wings are loosely based on high art— the Hermann Hesse novel Demian, about a boy’s struggle to access his better angels. “Blood Sweat & Tears” also makes clear the hard work the group had to put in to get a foothold in the industry. The music video is a rich, baroque journey freighted with allusions. It features works like Pieter Bruegel’s “The Fall of Icarus,” Michelangelo’s Pietà and even a Last Supper reference, springing their work to a new plane, where each lyric and frame became an occasion for deep analysis by sharp-eyed fans. Temptation featured heavily in the music; so did insecurity. Another track on Wings, “BTS Cypher 4,” was an unfiltered, radical manifesto of self-love, foreshadowing their next era.

The Love Yourself era

After almost two hours, the symphonic sounds of “K-Factor: An Orchestral Exploration of K-Pop,” another sold-out event, this time at New York’s Lincoln Center in June 2019, were almost at an end. When the 50 musicians onstage broke into the jazzy intro of “Idol,” the energy of the audience surged once more. “Idol” was the capstone of the band’s Love Yourself era, a three-album song cycle promoting their message of unfettered self-acceptance. Hyper-produced and genre-agnostic, the four hit singles of the final album, Love Yourself: Answer all had one thing in common: the pop-boosted brand of hip-hop that had become the essence of BTS’ sound.

Still, the surprises kept coming. In the music video for “Fake Love,” the band’s choreography relaxes into sensuous interpretive dance. The “DNA” clip dabbles in the aesthetics of psychedelia. By the time “Idol” came out—with a remix featuring rap superstar Nicki Minaj—BTS had transcended their regional roots. But in a twist reflective of their newfound confidence, the song doubled back on homegrown traditions, like lyrical Korean pansori-style storytelling and gong-like kkwaenggwari percussion. The wardrobe for the video even included reinterpreted traditional Korean hanboks.

As the years have elapsed, BTS has grown comfortable crossing gender lines with style. K-pop idols have typically maintained a modest veneer of asexuality, with public relationships a no-go, though in recent years this approach has loosened. While BTS has never publicly flouted those expectations, a hip thrust here and flash of flesh there, plus occasionally suggestive lyrics, reflect a new, more mature form of Korean star. “Idol” addressed their very identity and place in pop music: “You can call me artist, you can call me idol, I don’t care.” With a shrug, BTS declared their independence and cultural conformity all at the same time.

Charting the Map of the Soul

But success did not mean BTS was ready for a victory lap. The 2020 Map of the Soul era, another three-album thematic cycle, has been all about making sense of being at the top—the pressure, the creative depletion—while testing the boundaries of their globalized sound. The bubblegum pop of first single “Boy with Luv” flicks at their “skool days” phase, but throws it forward by featuring Halsey, one of pop music’s frankest witnesses to struggles with mental health. The bilingual “Make It Right,” co-written by Ed Sheeran, is a sweet and bouncy love song in its English passages, but its Korean verses allude to emotional struggle. Jimin’s “Filter” dances around a slinky Latin melody in the vein of Camila Cabello’s “Señorita”; “Inner Child” suggests classic boy-band pop in the style of One Direction. Pop icons Troye Sivan and Sia also make cameos.

Elsewhere, the band allows bits of Greek mythology and Jungian psychology to add nuance to a mostly brightly hued, multicultural palette. “I want to tell you that darkness exists everywhere,” J-Hope sings at one point. “Don’t be afraid of it.” The music video for “On” is biblical in scope and subject, with hints of The Lion King, Game of Thrones, Maze Runner and Noah’s Ark. Like their music, the visuals draw together and synthesize a world of influences. “Dynamite” dissolved all concept of provenance in favor of a song that would appeal to their fans with maximum joy.

A photo of K-Pop group BTS is reflected on the glass board at a duty free shop in Seoul on Oct. 14, 2020
Ahn Young-joon—AP

Performing artists today must navigate the tricky territory of cultural appropriation in music; BTS’ approach, it seems, is to cherry-pick snippets of melody, orchestration, style and stories, and then process them through multilayered production and the group’s lyrical preferences until the music and visuals feel fully digested, molded into something new and geographically nonspecific, yet accessible to a massive audience. As band leader RM told delegates at a United Nations conference about youth empowerment in 2019, “No matter who you are, where you’re from, your skin color, gender identity: just speak yourself.” But despite the squeaky-clean image, BTS has had moments of controversy. An early song titled “War of Hormone” was critiqued for misogynistic lyrics. And the band’s subtle allyship with the LGBTQ community has been complicated by politics in South Korea, where same-sex marriage is still outlawed.

BTS has managed mostly to endure these blips thanks to a forgiving fan base convinced of the band’s sincerity, a powerful publicity machine and their own humility. One of their constant refrains at concerts, in interviews and on social media is a simple “Thank you.” When I connected with J-Hope for a TIME interview in 2018 before his mixtape release, he told me in words translated from Korean, “These days, the baseline that’s behind my life is my deep gratitude for my life and my work.” That sentiment is echoed unmistakably in music that bridges the personal and the universal, giving an army of fans just enough of each member of the band to keep them—us—coming back for more. 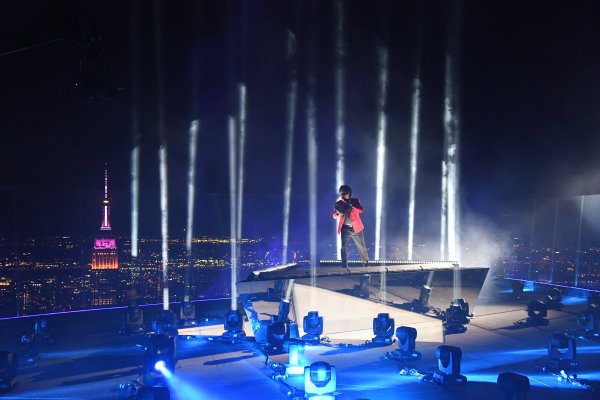 The Weeknd To Play Super Bowl LV Halftime Show
Next Up: Editor's Pick