The 12 Most Underrated BTS Songs

“Boy With Luv” was BTS’ song of choice when the K-pop phenom group performed at Times Square on Dick Clark’s Rockin’ New Year’s Eve, on Saturday Night Live and a multitude of similarly grand stages late last year. But if you were just tuning in, you would have missed quite a few worthy tracks. BTS’ discography dates back to June 2013, with the release of their debut album 2 Cool 4 Skool, and has since spanned genres, with lyrics offering social commentary and introspective musings alike.

Ahead of the seven-member ensemble’s new album Map of the Soul: 7, which drops on Feb. 21, TIME revisited BTS’ albums released over nearly seven years, including individual mixtapes by RM, Suga and J-Hope, to identify the overlooked gems. For the purposes of this list, “underrated” songs exclude title tracks released with music videos and promoted most heavily during album releases, as well as the usual fan favorites (“Silver Spoon,” “Tomorrow,” “Anpanman,” to name a few, have had their fair share of recognition.) We’ve also included “hidden tracks,” which are only found outside the realms of Spotify and Apple Music.

In no particular order, here are TIME’s picks for the most underrated BTS songs, compiled in a playlist at bottom.

The hidden track “Sea” is only available on the physical edition of the Love Yourself: Her album, so it may have evaded the notice of fans who mostly stream the group’s music. In the lyrics, BTS uses the imagery of an ocean and a desert to convey the hope and despair they experience while pursuing their dreams as K-pop artists. “The scary desert became the ocean with our blood, sweat and tears,” Suga raps. “But why is there this fear in between the happiness?” The song’s composition mirrors the theme — a cyclical, serene instrumental melody is paired with breathy vocals to create a sound that resembles the tranquil crashing of waves.

Another track from the Japanese album Face Yourself, “Don’t Leave Me,” garnered significant attention in part for being the theme song of a Japanese television series. But the merits of “Let Go” should not be overlooked. The song strips down heavy musical production in the refrain and layers the singers’ bare voices atop classical piano, highlighting the vocal colors of the four singers Jin, Jimin, V and Jungkook. Jin’s bright tone, in particular, shines in delivering the bittersweet emotions of wrestling between holding on and letting go, the internal struggle described by the lyrics.

While most of BTS’ earlier songs are hip hop-infused tracks that pack a punch in the rap verses, “Rain” is a jazz-centric number with a spotlight on relaxed vocal lines. The airy melody flows on top of light percussion and piano, creating a melancholy mood that matches the song’s lyrics about the grayness and gloom of a rainy day. A bonus: J-Hope, who specializes in rapping, makes a rare appearance singing the mellow verses in this track.

Early on in the group’s career, BTS set itself apart by boldly addressing societal issues. In “Spine Breaker,” the group tackles income inequality — “the class system of the 21st century is divided into two, those who have and those who haven’t,” the track begins. The song’s title refers to the youth who ask their parents for “shoes worth a couple hundred, padded jacket worth a couple thousand,” resulting in the parents having “curved spines” from laboring to fulfill their children’s requests. Vocalist V’s deep-voiced line “that is what will suffocate your heart, dirty clothes” warns against materialistic desires.

Released in the group’s debut year, “We On” is discussed much less among BTS’ fandom than other tracks from 2013. The number is one of the septet’s first instances of directly speaking to naysayers through their music. “Talk smack about my sunglasses, my hairstyle, my name,” RM says. “Head-scratching kids who say they hate the busy world of K-pop.” Jungkook sings the pointed lyrics ever so sweetly: “I don’t know you and you don’t know me, so please shut up.”

One of the only blues-influenced tracks in BTS’ catalogue, “Am I Wrong” was co-written by Grammy Award-winning musician Keb’ Mo, who sampled his 1994 song with the same title. The funky rhythm and upbeat melody — with Jimin’s high note as its climax — belie the track’s somber message about apathy in the information age. “If what you see on the news is nothing to you / if that comment is nothing to you / if that hatred is nothing to you / you’re not normal, you’re abnormal,” raps RM. The song was provocative at the time of its 2016 release, when it was perceived as a clapback at a former South Korean Ministry of Education official who called for a caste system and referred to people as “dogs and pigs.” In his verse, Suga raps, “We’re all dogs, pigs, become dogs because we’re angry.”

The Cypher series — rap tracks written and performed by RM, Suga and J-Hope — are some of the most emotionally raw numbers in BTS’ discography. The pre-2016 iterations excel in showcasing the rappers’ technical prowess. “Pt. 3: Killer” builds on the flow of past Cyphers and, with its more complex instrumentals, acts as a harbinger for the rap unit’s future tracks with more elevated production. RM, Suga and J-Hope’s piercing words glide across soft tunes from eastern instruments in the scathing diss track against rappers who doubt their rap skills and question their hip-hop roots.

Besides writing diss tracks to their haters, the group produced a gentle admonition to their fans. In “Pied Piper,” the members address behaviors common in the fandom. “Now stop watching and study for your test / Your parents and boss hate me / Video clips, pictures, tweets,” the track opens. “Stop, interpret the music video later.” But “Pied Piper” is more tough love than harsh criticism. “You’re not being punished,” Jin sings.

From Suga’s solo mixtape Agust D — “Agust D” is “Suga” spelled backwards, plus the letters “D” and “T” that stand for his hometown “Daegu Town” — “The Last” has received much attention for the rapper’s lyrics about depression and social anxiety. “So Far Away” is another track on the mixtape with poignant lyrics by Suga — in it, he expresses a sense of existential dread and the struggle of living without a dream. “I live because I can’t die,” Suga raps, “But I don’t have anything I want to do.” The BTS member’s gritty rap verses contrasts with singer-songwriter Suran’s ethereal chorus.

One of the less discussed tracks from RM’s 2018 solo mixtape, “UhGood” is a vulnerable expression of the BTS leader grappling with meeting expectations. “UhGood” is the English pronunciation of the Korean characters in the song’s title, which mean “falling short” and “missing each other.” Both meanings are referenced in the song’s lyrics, as RM sings about being disappointed with himself — “honestly, I trample myself, ‘Do you only amount to this?’” — and the distance between his ideal and his reality.

“Daydream” and “Airplane” are the two songs on J-Hope’s solo mixtape Hope World that were released with music videos, but the groovy rap number “Base Line” should not be overlooked. At just 90 seconds, the track is jam-packed with brass instrumentation, beats and J-Hope playfully alternating between high-pitched and low-pitched rapping. In a 2018 interview with TIME, the artist shared the influence behind this song: “These days, the baseline that’s behind my life is my deep gratitude for my life and my work.”

“Ddaeng,” a track composed by the rap unit and released for the group’s fifth anniversary, is another number not available on Spotify or Apple Music. RM, Suga and J-Hope’s creative wordplay is taken to the next level with this number. “Ddaeng” is an onomatopoeic word that mimics the dinging of a bell, and is also used to signify an incorrect answer. Repeating the word, the three members delivered another knockout aimed at the critics who, in deriding BTS, generated more buzz around the group and ended up helping propel them to the top.

Listen to the songs here.

The original version of this story misstated the name of the album BTS will release on Feb. 21. It is Map of the Soul: 7, not Map of the Persona: 7. 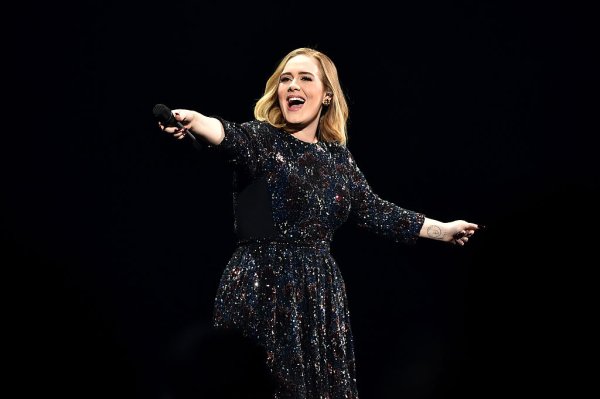 This Should Come as No Surprise, But It Turns Out Adele Is the Perfect Wedding Singer
Next Up: Editor's Pick