Allow j-hope to introduce himself — and to welcome us to Hope World, the K-pop superstar’s debut solo mixtape. J-hope, 24, born Jung Ho-seok, is one of seven members of BTS, one of the most popular boy bands in the world. But the release of his independent project doesn’t spell any kind of end of the BTS reign. In fact, he is the third member of the group to put out an individual mixtape, giving their army of global fans a taste of his own artistic vision — without fracturing the boy band unity.

“The team always comes first, so I focused on our projects as BTS and tried to make time in the hotel room, on the airplane, and whenever I could find a few minutes,” he says of the two-year-long process of developing Hope World, which he considers “my calling card to the world.”

Best known in BTS for his rapping and his background as a former competitive street dancer, the young star was discovered by BigHit Entertainment’s founder and CEO Bang Si-hyuk thanks to his sharp moves. On Hope World, he gets to flex his own voice, crafting a set of songs that fans of rap and pop can enjoy even if they don’t speak a word of Korean. The mixtape opens with an adventure inspired by Jules-Verne, then delves into his personal reflections on fame and success, anthems for positivity and party tracks, all layered over a mix of instantly catchy trap, dance and tropical beats. Here, j-hope shares exclusively with TIME the stories behind this collection of solo tracks, whose messages — despite the language difference — certainly don’t get lost in translation.

TIME: Why did you want to release a mixtape? What sets this apart from BTS music?

j-hope: My fantasy had always been making a music video and performing with music that I had created. I also wanted to put my own story to music and share it with the world. [BTS members] RM and SUGA releasing their own mixtapes was the motivation for my own project. I have been and continue to be deeply influenced by them, from the day we began to where we are today, and I always thought it was awesome that they were telling their own personal stories and making music in their own styles. I started dancing first, but felt I could also tell my story through my music.

There are elements of trap, EDM, Caribbean beats and futuristic funk-soul mixed together across the mixtape. But most of all, you’re clearly leaning in to all forms of rap. What artists and sounds inspired you most?

I actually don’t preoccupy myself with “I’m going to do this kind of rap in this kind of genre” kind of thinking when I work. I went with and got my beats from what appealed to me, what drew me in and what felt good. The way I work is very on-the-spot flow, and I write the rap and the music as I feel them coming. I drew inspiration for this mixtape from artists like KYLE and Aminé. I also have to mention the heavy influence of Joey Bada$$. These are all artists I highly respect, and I’d love to do projects with them in the future.

The first song, “Hope World,” opens up with a water splash sound, and the lyrics mention being under the sea. What’s the journey you’re taking?

I remember being captivated by Jules Verne’s Twenty Thousand Leagues Under the Sea when I read it as a kid. I think I took myself back to that place for new inspiration and brought back a part of it as the motive to start writing Hope World. It’s an introduction to people who are brand new to [me] with me as Captain Nemo showing you around just as the submarine in the book cruised around the world’s oceans. I know this might sound really corny, but I invite you to pretend to be Professor Aronnax as you listen to this song and take a journey through my world [laughs].

What does it mean to be a “Piece of Peace,” which is the title of one of the songs?

I thought it would be hugely meaningful for me if I can become, like my namesake, hope for someone in the world — not even some grandiose peace but just a small shard of it. I first started out by thinking, “It’d be fantastic to become a part of someone’s personal peace through my music,” and while working on the beats thought about the kind of message I can send out to my own generation living with their worries and burdens. I wanted to talk about peace even though I knew that it was a weighty topic, and I tagged on “pt. 1” to the title because I want to keep talking about it.

The voices of the other BTS members appear on “Airplane.” Did they contribute in other ways?

It was so special. I felt that group vocals for “Airplane” coming from all the BTS members who’ve been together through this journey would create an even more heartfelt song. I first asked our member and my friend RM to do the hook for the song. He agreed and worked really hard to make the recording, but we kept talking and came to the agreement that building the hook with just my voice and ending the song on it would create a deeper emotional impact. I could see it too, so unfortunately our leader’s voice had to stay behind in the editing room. I want to take this chance to thank once again [RM] and all the members. I have the gang vocals and RM’s rap on my phone, and I can’t wait for a chance to put it up on social media and share it with everyone!

Also on “Airplane,” near the end you brush off the haters: “Don’t give a damn, I’m just happy / I made it.” Do you feel that you’ve “made” it as an artist now?

I think “making it,” as you say, means different things to different people. I was sitting in an airplane when I was writing these verses, a first-class seat no less, and it dawned on me that I was in the airplane, in the seat and living the glorious life I’d only dreamed about when I was young, and had somehow gotten used to now. But then and now, I’m still the same person, the same j-hope. My thoughts on life haven’t changed very much. But my world has gone through incredible changes. I think it was that experience of being with my fans around the world and stepping back on Korean soil that it hit me, “Man, I think I’ve made it…” For me, the joy that I have right now and the amazing love I’m getting is how I define my success.

“Base Line” is an intense rap track that sees you flexing over record-scratch sounds. What does this song mean to you? What is your “base line”?

To be honest, I didn’t expect a lot from this track. I was thinking in terms of an interlude between songs, and I think I was as relaxed as I could be writing this song, but then I heard the mix master track and it floored me. It might not be all that to anyone else [laughs]. I just wanted to give a story about how I started, the “baseline” of my life. People don’t really know how I got into music. These days, the baseline that’s behind my life is my deep gratitude for my life and my work. You can see that too in the lyrics. Everything I am comes from this deep gratitude I have.

“Daydream” seems like a particularly personal song — but it’s also a fun beat to dance along with. What story does it tell?

People know me, and I know I’m a person in the public’s eye. I wanted to show that behind this public figure is an ordinary guy named Jung Ho-seok. I wanted to use this as an outlet to talk about the desires and wishes that every person in the world has but that I have to hold down and cover up because of having chosen this line of work. Daydreaming is, of course, dreaming while wide awake about things generally outside our reach. But even if these dreams might never become reality, lining these dreams up in my head still gave me comfort. I thought expressing this topic in the wrong way might make it way too heavy, so I wanted to put it to something bouncy and fun.

You’re now the third BTS member to put out a mixtape after RM and SUGA. Who’s going to be next?

First, it’s such an honor to have the opportunity to make this mixtape. All of our members are interested in creative work and have the deepest passion for music, so I wouldn’t be surprised if we see a mixtape from anyone. Right now, we’re all focused on the new BTS album. We’re always working on and creating new things, and I hope you can continue to show us your love and stay with us in our exciting journey. 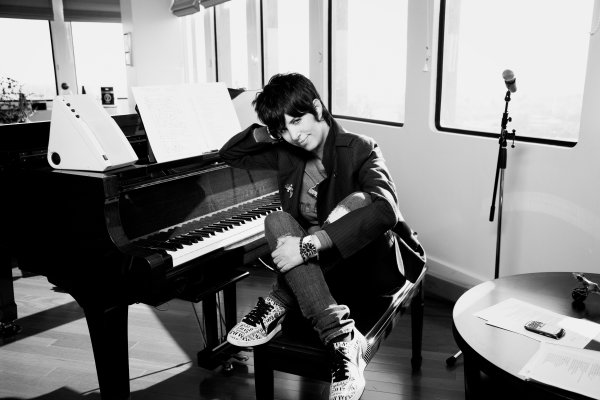 Oscar-Nominated Songwriter Diane Warren Is Ready for Her Prize
Next Up: Editor's Pick