'I Was Lucky I Didn't Give It All Up': K-Pop Band BTS Addresses the United Nations

Leader of the seven-member boy band Kim Nam Joon spoke Monday on the importance of believing in yourself and not yielding to social pressure. His bandmates, dressed in somber suits rather than their typical flashy costumes, backed up his impassioned plea.

“Even after making the decision to join BTS, there were a lot of hurdles. Some people might not believe but, most people thought we were hopeless, and sometimes I just wanted to quit,” Kim said Monday at the launch of “Generation Unlimited,” a program to increase youth education and empowerment.

“I was very lucky that I didn’t give it all up,” he added.

BTS has become one of the most popular musical acts in the world since debuting in 2013. Their appeal has increasingly extended into the U.S. In May, their album Love Yourself: Tear became the first K-pop record to top the Billboard charts. The previous month, BTS was the first Korean act to perform in an American stadium.

Last year, BTS’s partnered with the Korean Committee for UNICEF for the anti-violence, “Love Myself” campaign. The initiative has so far raised over $1 million.

During his UN address, Kim discussed his life and the band’s ascent to mega-stardom, but also kept the spotlight on self-confidence.

“We have learned to love ourselves, so now I urge you to ‘speak yourself,'” he said. “No matter who you are, where you’re from, your skin color, gender identity: speak yourself.”

After the speech, which was attended by U.N. Secretary-General António Guterres, BTS performed at a “Generation Unlimited” event, CBS reports. 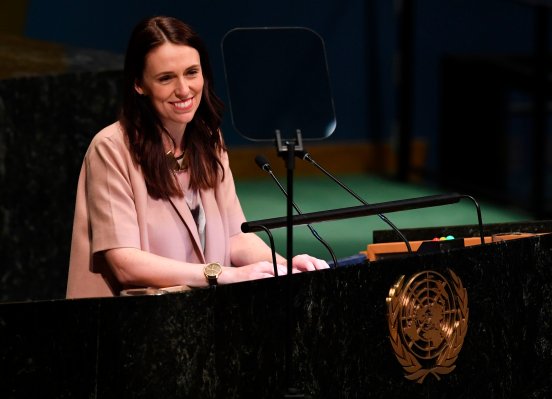