Breaking Down the Influences Behind BTS' New Album Map of the Soul: 7

“Black Swan,” BTS’ first single off their new album Map of the Soul: 7, was released in January with a hypnotizing, dance-heavy music video. That’s typical of the seven-member K-pop supergroup, known these days for breaking streaming records and mobilizing a global fanbase that goes by the name of ARMY. But this video was different: instead of starring the sleek moves of RM, Suga, J-Hope, Jimin, Jung Kook, Jin and V, it featured a European dance troupe.

A few weeks later, British sculptor Antony Gormley stood under the monumental metal swirls of his open-air installation “New York Clearing” on a misty Brooklyn pier. His unveiling was part of the “Connect, BTS” global art project the group had backed, with large-scale, temporary art installations displayed in five cities around the world.

And just 12 hours before the release of Map of the Soul: 7 last week, the Gen-Z-favored video platform TikTok lit up with an official 30-second clip of their next single, “ON,” making BTS the first artists to promote new music first on the social app (and inspiring a viral dance challenge, an almost inevitable downstream effect).

Add to that the more traditional promotion — a James Corden Carpool Karaoke, Tonight Show and Today Show appearances, January’s onstage Grammys performance as backup for Lil Nas X — and this layered BTS “comeback,” as a new album cycle is called in K-pop, serves as a case study in hitting fans and new audiences at every level. BTS’ fandom is notoriously hungry; the group’s parent company BigHit Entertainment is strategically figuring out how to reinvent the menu. In particular, their more unorthodox choices this time around share one key commonality: they center figures other than just the septet of K-pop “idols.” It’s a bold and meaningful strategy for a group that’s developed a devout fandom and also been unusually open about the pressures of fame, perfectionism and self-criticism. In fact, those pressures — and their desire to manage and even escape them — end up being a central theme on the new album, a body of work that is as far-reaching in inspiration as it is introspective in subject matter.

The 20-track album is a meaty offering, and its grab-bag of influences echoes the eclectic, but savvy, strategy of the release. Eight of the songs will be familiar to fans already, including the first five tracks, which were also on last year’s Map of the Soul: Persona. The rest, including singles “Black Swan” and “ON,” are the mix of sensitive ballads and hard-charging rap tracks that fans have come to expect, sprinkled liberally with reflective interludes and boy band pop choruses. In content, it’s their road album: a project written from their perspective at the top of the industry, reflecting extensively on what they’ve accomplished and how tough it is in the glare of the spotlight. Taylor Swift’s Reputation and Lover tried this in different ways; Drake dwells on it regularly.

The subject is their loneliness at the top, drawing from experiences they’ve racked up while traveling in an ever-increasing state of super-fame. (Their last era, Love Yourself, was more universally relatable to those of us who aren’t international pop stars.) But BTS is generous with their emotions. They are doubtful, regretful, uncertain. And in humanizing themselves through their music, they break free of K-pop’s most constricting (and alienating) tropes — namely, the expectation of “idols” as glossy, flawless performers, and of its music as factory-produced pop-lite — aligning instead with this moment’s biggest trend in pop: honesty.

To that end, BTS’ collaborations with some of the most recognizable (and confessional) names in mainstream pop are no surprise here. “Boy With Luv,” their highly-charting song with Halsey, may be a bubblegum fan-appreciation song — but it also solidified a connection with one of pop’s frankest voices about mental health. “Make It Right,” co-written by Ed Sheeran, is sweet and generous, a love song to the world that hides in its Korean verses a story of darkness held at bay. (A remix, not on the album, also featured the notably pensive pop singer-songwriter Lauv.) Then there’s “Louder Than Bombs,” a new track made with South African-Australian pop artist Troye Sivan. Dark and menacing, with vocals that show off the boys’ falsettos, it’s a haunting slice of musical cross-pollination. It’s also intended as a reassurance to listeners who are struggling. “I want to tell you that darkness exists everywhere,” J-Hope sings. “Don’t be afraid of it.”

Finally, pop mainstay Sia shows up on a bonus remix version of “ON,” the new single. “ON” is already massive, kicking off with gospel-influenced organ, featuring propulsive percussion and a snare drum sing-along and tearing things up with an uplifting refrain: “Can’t hold me down ’cause you know I’m a fighter” may be the album’s most memorable line. (Also memorable: the music video, a minimal-for-BTS piece of choreography backed up by a marching band.) Sia comes in on the chorus as a contrasting vocal, but the fact that she’s there at all — an appearance that the group themselves reportedly coordinated — speaks to their ambitions to be taken seriously as a chart-topping pop act, regardless of language.

Greek mythology with a side of punk rock

Three members of BTS are rappers first, so their passion for hip-hop also comes across loud and clear. It’s there off the top, on the mission statement “Intro: Persona,” which sees group leader RM spitting rapidly over a grimy guitar beat. “Who the hell am I?” he asks. “I just wanna give you all the voices till I die.” It’s both a Jungian self-reflection and confident clapback. It’s there on “Dionysus,” a lyrically meaningful ode named after the Greek god of the party, that sees them turning up the heat — but with a double entendre. “Art is alcohol too, if you can drink it, you’ll get drunk,” raps Suga. There’s punk rock and head-banging energy in the chorus (“Are you ready to get hyped up?” RM asks in English, before the singers urge listeners to “drink, drink, drink”), but also a wealth of wordplay that dives more deeply into the Greek mythology it’s based on.

Their rap ferocity also comes through on “UGH!” which starts with a gunshot and Eastern-inflected tip-toe synth melody before exploding into an angry cypher from RM, J-Hope and Suga. “Rage? Of course you need it,” RM raps, disdainfully. Suga and RM unite again with a different approach on “Respect,” a bouncy hip-hop throwback that riffs on the song’s name. And on “Outro: Ego,” J-Hope doubles down on the psychological themes that resonate across the album. A record-scratch intro suggests it will be an old-school jam, but J-Hope has more in mind than retreading old territory. Jazzy big-band horns brighten it up as he — appropriately enough — brings hope and joy into the equation.

BTS isn’t afraid to draw melody and instrumental inspiration from sources further afield, either. Jimin’s “Filter,” an album standout, is distinct for its sinuous Latin guitar melody. (Think: “Señorita,” but in Korean; there are even some slinky vocal flourishes in that vein.) “Moon” feels folksy; if it were sung in English, you’d expect a Southern country twang in the delivery. “Black Swan” circles around an instrumental refrain, nodding at traditional Eastern sounds. Even “UGH!” mixes in a vaguely Middle Eastern background melody line. A lot has been said about the murky territory of cultural appropriation in music; BTS’ approach, it seems, is to pick snippets of melody and orchestration, and then process them through their system of multi-layered production and focused lyricism until the result feels fully digested, molded into something new and geographically anonymous.

Many acts have tried to jump on Latin or Afrobeat bandwagons, a quick play for trendiness that can pay off in the charts but fall flat on a second look. See, for instance, Justin Bieber’s foray into Latin pop on “Despacito”; the singer has admitted he doesn’t know Spanish and just likes the sound. (Bieber jumped on a remix of the Luis Fonsi and Daddy Yankee hit in 2017, but has not returned to the genre.) BTS doesn’t claim any particular cultural tradition or sound as their own, nor have they attempted to insert themselves into others’ work; as a global pop phenomenon who have toured around the world and cited diverse personal musical and artistic influences, they seem happy to celebrate and reimagine the globalized world they live in through song.

And for those who miss classic boy band pop, never fear: BTS comes through on “Inner Child,” a song that wouldn’t sound out of place on an early One Direction album. Their sweet ballads, like the undeniably pretty “00:00” with its trendy trap beat and a “Halo”-esque bridge, cut straight to the heart. “Friends,” Jung Kook’s R&B solo moment “My Time,” “Jamais Vu” and the ultimate tear-jerker “We are Bulletproof: the Eternal” bring things home. “So much pain, too much cryin’… we were only seven, but we have you all now,” they sing, a reflection on their growth as seven members over seven years together. It’s a nice notion, if a bit simplistic.

It’s also a clear statement of how they’ve tried to alleviate the pressures of fame: by spreading out responsibility. The album has a little bit of everything, for everyone. K-pop has long been fighting stereotypes around the “idol” machine and the value of the art they produce; BTS could put out pretty much any reasonably catchy body of work and still be the biggest boy band in the world, commercially. That they — and BigHit — choose to release art with a message that welcomes its audience into the group’s inner workings feels both natural and appropriate for the passion of the community they’ve created. By applying twists to familiar formats, kickstarting partnerships with unexpected communities and readily embracing new technology and musical influences, they’ve mapped out a method of surprising and satisfying listeners that gives just enough peeks behind the curtain to satisfy our 21st-century voyeurism — while still deflecting attention toward their craft and their extended universe of content. This album may not be a map of their souls as individuals, but it’s certainly a map the global music machine will be following. 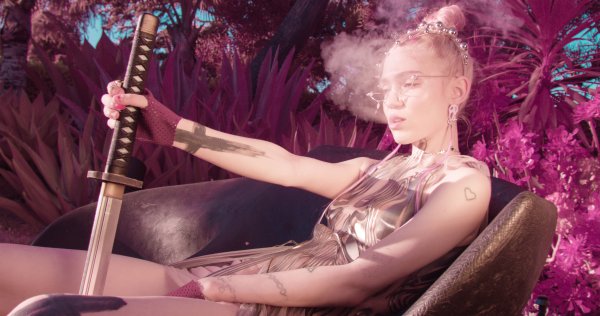