Not Every U.S. Presidential Race Has Been Decided on Election Day. Here’s What to Know About America’s History of Contested Elections

A Thomas Nast cartoon satirizing the Compromise of 1877 that resolved the 1876 election, published in Harper's Weekly, February 17, 1877.
The New York Historical Society—Getty Images
By Olivia B. Waxman

In a year full of uncertainties, Election Day 2020 is one of the biggest wildcards. On the morning after Election Day, with an expected record number of mail-in ballots having been cast in the Presidential race, it remained unclear who the winner was. Even after a winner emerges, there may be challenges to the result. And, some Americans worry, even the matter of whether Election Day will be peaceful is not a given.

But while many facets of the 2020 election, such as the role of COVID-19, are unprecedented, the U.S. does have a history of Presidential elections that took more than a vote to resolve. And while it’s a short list, it’s one that goes back to the earliest days of the Republic—and that holds lessons for today.

What’s clear from the few examples of contested elections in American history is that they occurred against the backdrop of intense partisan politics and at critical junctures in U.S. history. And, even after a winner is declared, the reverberations of such elections can last for decades: Elections have consequences, and elections in which there was a dispute over the winner have had even more significant consequences.

The Election of 1800 was the first Presidential election to go to the House of Representatives for resolution, after Vice President Thomas Jefferson received the same number of electoral votes as his fellow Democratic-Republican Aaron Burr.

Back then, the person who got the most votes from the states’ electors in the Electoral College would become President, and the person who got the second-most votes would be Vice President. (This is how Jefferson had been VP despite being a rival of the President’s.) In the event of a tie, the House of Representatives chose the winner, with the Congressmen voting by state. Congress, however, was dominated by the Federalist Party, which had run its own candidate in incumbent John Adams.

As this scenario played out, “there were threats of violence and talk of the Virginia or Pennsylvania militias marching on the Capitol if Jefferson wasn’t elected,” says Sidney Milkis of the University of Virginia’s Miller Center of Public Affairs, who spoke to TIME as part of a presidential-history partnership between TIME History and the Miller Center.

On both sides, the stakes for the election result were perceived to be enormous.

“Concerns about the shape of federal government went beyond issue disagreements, and became the existential crisis in which neither side recognized the other side as legitimate and feared for future of the country if the wrong side won the election,” says Robert Lieberman, co-author of Four Threats: The Recurring Crises of American Democracy. “People leading up to 1800 legitimately feared something was going awry with the Democratic system and that the country was at risk of backsliding into monarchy.”

It took 36 ballots for Jefferson to be declared President—after which Congress also passed the 12th Amendment, which got rid of the runner-up-as-VP situation by instructing state electors to cast two separate votes for President and Vice President.

Despite the Amendment, the House of Representatives was left to decide the Presidential election again in 1824. That year saw four candidates—all Democratic-Republicans: Secretary of State John Quincy Adams, House Speaker Henry Clay, Treasury Secretary William Crawford, and Tennessee U.S. Senator Andrew Jackson—each fail to win a majority of Electoral College votes. Supporters of Henry Clay helped sway the votes towards John Quincy Adams. In what’s known as “the corrupt bargain,” Adams then made Clay Secretary of State, a job considered a stepping stone to the presidency. This move infuriated Andrew Jackson, who had won the popular vote, and galvanized his supporters.

Not coincidentally, in 1828 Jackson won the Presidency—thanks in part to his coordination of local party groups, an innovation that helped create the modern system of two stable national parties.

Though it took some extra time to get a result in the presidential elections of 1800 and 1824, the final decision was not disputed by those involved. Such was not the case during the 1876 election, which pitted Democratic New York Governor Samuel Tilden against Republican Ohio Governor Rutherford B. Hayes.

America was at another formational moment, amid political tensions over the shape of the federal government in the aftermath of the Civil War. The election of 1876 put those questions front and center: Would control go to the Republicans—who had pushed for more federal power and for the rights of Black citizens via the 13th, 14th and 15th Amendments—or the Democrats, who favored less federal intervention in the South and limiting the rights of the formerly enslaved? (In the 20th century, the Democratic and Republican Parties realigned on issues of both civil rights and federal intervention.)

“There were two big issues: one was race,” says Eric Foner, the Pulitzer Prize-winning historian and expert on the post-war period known as Reconstruction. “What is going to happen to the four million former slaves? There was great progress, but there was also a tremendous backlash against that progress. And second of all, the economy was in a depression [after the] Panic of 1873. There were sharp differences between the parties on both the issue on the rights of Blacks and what to do about the economic crisis.”

These crises drove high voter turnout: More than 80% of eligible voters cast a ballot, though there was also widespread suppression and intimidation of Republican voters, especially Black Republicans, and especially in states with contested governors’ races.

The Democratic party backed paramilitary groups, like the Red Shirts and the White League, who were an aggressive presence at polling places and party meetings. The written plan that the Red Shirts followed to make sure Black citizens in South Carolina could not get out to vote specifically urged each Democrat to “control the vote of at least one Negro, by intimidation, purchase, keeping him away or as each individual may determine.” In 1907, the state’s U.S. Senator Ben Tillman bragged about how effective that plan was: “We shot them…we killed them…we stuffed the ballot boxes,” Tillman reflected. In a perverted distortion of the significance of 1876 being the 100th anniversary of the Declaration of Independence, he described the disenfranchisement of Black voters as “a second Declaration of Independence.”

So while Tilden, the Democrat, won the popular vote, and was believed to be so ahead on Election Night that newspapers declared “Tilden Elected” the day after, widespread voter intimidation and voter fraud allegations threw the legitimacy of 20 electoral votes into question. Tilden ended up being one Electoral College vote short of the 185 he needed to win.

Men seated around a table with a ballot box counting votes after the disputed 1876 presidential election at 'Elephant Johnnie's', a New Orleans bar and polling place, Nov. 7, 1876. From Frank Leslie's Illustrated Newspaper.
Library of Congress/Getty Images

“It wasn’t a free, fair election from the very beginning,” says Foner. “Tilden won the popular vote only because Klansman and other white supremacist organizations used violence to suppress the Black vote in many parts of the South. Tilden would never have carried the southern states that he did like Mississippi or Alabama without the widespread violence preventing Black people from voting.”

The Constitution didn’t have a roadmap for distributing disputed electoral votes, so Congress winged it and in January 1877 created a bipartisan commission of members of the U.S. House, Senate and the Supreme Court. After nearly four months, the leaders of the two parties ended up privately negotiating a deal through which Hayes was declared the winner on March 2, just three days before his public inauguration.

“Outside of the Constitution, outside of the law, they just made a deal, and that was the end of that,” as Foner puts it. “The Democrats would allow the House of Representatives to recognize Hayes as the President. In exchange for that, the Republicans agreed that Hayes, when he got in, would remove federal troops from the South.”

As former Secretary of State Jeremiah Black lamented back then, “we can never expect such a thing as an honest election again.”

The bargain was not only the end of the Election, but it was also the end of gains for freedom that had been made during Reconstruction. The deal made room for state Jim Crow segregation laws that wouldn’t be dismantled for nearly another century. Voter suppression continues to this day. After the Civil War, “The slave went free; stood a brief moment in the sun; then moved back again toward slavery,” scholar W.E.B. DuBois wrote in 1935.

“Basically, the Republicans got the White House and the Democrats got the whole South, and the losers were the African Americans,” says Foner.

The legitimacy of a presidential election result wouldn’t be challenged again until 2000. That year was the first time the U.S. Supreme Court decided a Presidential election, when the race between Texas Governor George W. Bush and then-Vice President Al Gore came down to Florida.

Gore won the popular vote by more than 500,000 votes but at the end of the Election Day, the count in Florida—the state that proved an Electoral College tipping point—was too close to call. After initially conceding to Bush, Gore retracted his concession and sent a legal team to Florida to pursue a manual recount in some counties. Wall-to-wall cable news coverage showed officials holding up cardboard ballots that had partially punched-through holes (including “hanging chads“) and trying to figure out whom voters intended to pick.

That December in Bush v. Gore, the U.S. Supreme Court ruled 7-2 that re-counting ballots in different ways violated the Constitution’s Equal Protection Clause and 5-4 that no constitutional recount could be held before the members of the Electoral College were scheduled to officially cast their votes on Dec. 18. With that, five weeks after Election Day, Bush won Florida and thus the presidency, by 537 votes—out of about six million cast in the state.

The historians to whom TIME spoke agreed that Bush v. Gore exacerbated the political polarization that has continued to build since then.

Today, two decades after that historic decision, all eyes are on the Supreme Court again. Trump has suggested the possibility of challenging the 2020 election result, and has said he’s “counting” on the Supreme Court to “look at the ballots.” On Monday, his nominee Amy Coney Barrett is all but certain to be confirmed to replace the late Ruth Bader Ginsburg, thus tipping the balance on the bench firmly toward the conservative side.

As all of these contested elections show, eventually these elections have been resolved, and the loser has stepped aside. But how the outcome is resolved can very quickly fall into a legal gray area.

“The Constitution does not tell you what should happen if there are disputed returns in a presidential election,” says Foner. “We are in uncharted waters if disputes arise as to who carried a state.” 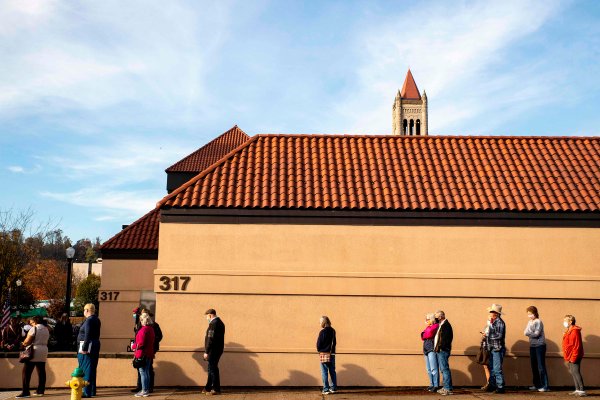 Business Leaders Must Help Americans Vote This Election
Next Up: Editor's Pick