John Adams Lost His Re-Election. How He Responded Set a Precedent That's Been Followed for More Than 200 Years

Students of the Presidency honor George Washington for establishing that two terms as president were enough for any man. The precedent he set, the two-term tradition, bound his successors, even those who wanted more time in office, until Franklin D. Roosevelt won a third term in 1940. In 1946 Congress proposed, and in 1951 the states ratified, the 22nd Amendment, writing Washington’s legacy into the nation’s fundamental law.

Right after Washington, in 1801, John Adams did something just as momentous, just as reaffirming of democratic constitutional principle. After losing the presidential election of 1800 to his former friend and political rival Thomas Jefferson, Adams decided that losing an election, even one for the presidency, means what it says. Adams went home. He did not dig in his heels and try to stay in office. Nor did he propose to play with the election’s date. Nor did he listen to hints by fellow members of his Federalist party that he let them keep him in office as a caretaker president while the House of Representatives wrestled to resolve the electoral deadlock between Jefferson and Aaron Burr. Adams made his plans clear. As his term of office was to end on March 4, 1801, he would stay in office not one minute past noon on March 4. He wanted no part of schemes or cabals. He wanted retirement. And he was going to embrace it.

John Adams had had a rough time as the nation’s second president. He found the office frustrating beyond measure, largely because the members of his cabinet were loyal to Washington or to Alexander Hamilton rather than to him. His popularity with the people was shaky and uncertain. Private family unhappiness, including his wife’s fragile health and his son Charles’ early death, shadowed his acts as a public man. Even so, he compiled an estimable record as president, convincing him that he deserved a second term. Staving off war with France, he established peace between the two nations. He also re-established control over his administration by firing his cabinet. Even after his defeat, he appointed John Marshall as chief justice, that office’s greatest holder in U.S. history.

Adams was profoundly committed to constitutional and political principle. That principle fitted with personal inclination. He had no desire to ignore constitutional terms of office and he had no desire to behave, let alone look, like an American monarch. He made no mention in his correspondence of any suggestion that he should occupy the presidency beyond the constitutional end of his term. He assured his youngest son, Thomas Boylston Adams, in the summer of 1800, when defeat loomed, “Be not concerned for me. I feel my shoulders relieved from a Burthen. The Short remainder of my days will be the happiest of my Life.” Perhaps he also thought that his adamant decision to step down would pressure the wrangling members of the House to resolve the deadlock between Jefferson and Burr, forcing a constitutional solution to the constitutional tangle. Besides, Abigail was waiting in Quincy. He had not seen her in months, since she departed Washington, D.C., which she loathed, for Quincy. He missed her.

Before dawn on the morning of March 4, John Adams left the executive mansion and began the arduous two-week journey home by stagecoach and boat. He never left Quincy again. For 25 years, he read, wrote, argued, reflected and philosophized about politics, government, history, religion and his life and career. He carried on a bitter quarrel in print with a foe long dead, Alexander Hamilton. He entertained himself by exchanging dozens of letters with such old friends as Benjamin Rush and Benjamin Waterhouse, and revived an old friendship by exchanging more letters with Thomas Jefferson. And he named his house twice—once as Peacefield, to commemorate his success in making peace with France in 1800, and once as Montezillo (little hill), in affectionate satire of Thomas Jefferson’s Monticello (little mountain). As the Sage of Quincy, he taught us how to live, and then he taught us how to die.

But one thing that he never did was to voice a word of regret about leaving the presidency at his term’s end. None of his successors has ever violated or dishonored the precedent he established. And, if we are fortunate, none ever will.

R. B. Bernstein teaches political science at City College of New York. His most recent book is The Education of John Adams (Oxford University Press). 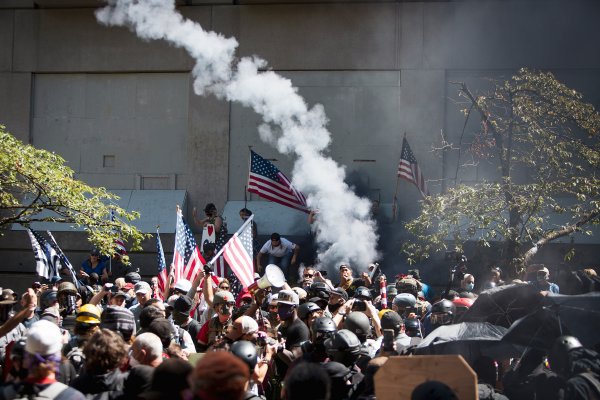 America Is Being Pulled Apart. Here's How We Can Start to Heal Our Nation
Next Up: Editor's Pick