What Kanye West Got Right and Wrong About the 13th Amendment, According to Historians

Kanye West has once again gotten himself in hot water with his views on American history. But, while his take on the past can be perplexing, his recent statements offer a window into a real historical and political debate.

The rapper — who is now going by the shortened stage name Ye — has tended to oversimplify things, at the very least, when he’s tweeted about the history of race in America. As historians have previously told TIME, his tweets about slavery being a choice overlooked important evidence to the contrary, and his tweets suggesting that African Americans should be Republicans because President Lincoln was one missed the way that party politics realigned on the issue of civil rights long after the Civil War ended.

On Sunday, West’s tweets — shared along with a photo of him wearing a Make America Great Again baseball cap in a luxurious aircraft cabin — turned once again to this period of 19th century U.S. history. First he called for the abolishment of the 13th Amendment to the U.S. Constitution. In a follow-up tweet, he walked that statement back to calling to amend the amendment, a position he clarified during an appearance on TMZ Live on Monday afternoon, saying that he misspoke when he used the word “abolish.”

West’s tweets seem straightforwardly paradoxical, as the 13th Amendment, which was ratified Dec. 6, 1865, abolished slavery in the United States. “Neither slavery nor involuntary servitude, except as a punishment for crime whereof the party shall have been duly convicted, shall exist within the United States, or any place subject to their jurisdiction,” it reads. Along with the 14th and 15th, it is part of the group of “Reconstruction Amendments” that helped determine how the United States would function after the end of the Civil War.

Abolishing the 13th Amendment would eliminate constitutional safeguards against slavery, a fact that prompted widespread backlash to West’s initial tweet, including from his fellow celebrities. But West is not the first to see the amendment as problematic.

The main source of contention with the 13th Amendment is a well-known loophole that suggests it’s legal to enslave convicts.

Such a clause excluding convicted criminals is a “customary exception” dating back to English Common Law, explains Manisha Sinha, author of The Slave’s Cause: A History of Abolition. But the 13th Amendment’s version of that idea has often, historically, been applied in a way that undermines the amendment’s stated purpose. State and local authorities in charge of enforcing it, specifically white southerners in the years after the war, “tried to get around the amendment” by locking up black people on “trumped-up charges and [using] their labor for free,” she tells TIME in an email. Through a system known as convict leasing, convicts would be leased out to plantation owners to do hard labor, such as rebuilding infrastructure destroyed during the Civil War.

In other words, the loophole proved to be a way to keep the system of unpaid labor alive. Or, as West put it to TMZ on Monday, quoting a friend of his, “In order to make a free man a slave, all you have to do is convict him of a crime.”

This wasn’t what the amendment’s framers intended, adds Daryl Scott, a professor of history at Howard University. After all, the men who wrote the 13th Amendment were Union men, not slaveholders, and this constitutional change was a way to codify the very thing for which they’d just fought a devastating war. “They weren’t all abolitionists, but as they won the war, they knew slavery was over,” he says. “They were not trying to re-establish the institution.”

The historians who spoke to TIME say that the wording, though it might have seemed innocuous to those who put it in the Constitution, was abused. Many state and local legislatures in the South used the loophole as a way to allow the exploitation of labor and to reinforce racist social structures. And though the system itself was not “expansive” in terms of the number of people involved, Scott says, the threat of it hung over society.

“Different laws were established specifically to convict African Americans for offenses as small as loitering, [or] not having proof of employment. These laws were abolished during Reconstruction, but then they get recreated in different forms in the Jim Crow era,” says Chad Williams, Professor of History and African and African American Studies at Brandeis University. The convict-leasing system did eventually come to an end, by about the 1920s. In part due to the construction of new prisons, those prisoners who might have been sent out to work were increasingly kept in facilities — and their numbers began to rise, in the North as well as the South. “You see this explosion in the prison population taking place really in the middle of the 1960s, in the middle of the Johnson administration — one of the great ironies that Elizabeth Hinton writes about,” Williams adds. “[An] increased focus on law and order begins with LBJ, who throws more federal resources into policing to address problems of urban unrest, the race riots, more federal surveillance of black communities.”

Some experts and advocates — most notably in recent years, in Ava DuVernay’s 2016 documentary 13th and research by Michelle Alexander, author of the 2010 book The New Jim Crow — have thus argued that the loophole laid the groundwork for mass incarceration, and the disproportionate imprisonment of African Americans and Latinos that is still a problem today. Some have argued that keeping convicted felons from participating in society, for example by disenfranchising them and making it harder for them to find housing and jobs, is a form of modern slavery. In fact, the national prison strike that took place this August and September was in part aimed at ending what organizers called “modern day slavery” in the form of forcing prisoners to labor for little wages, or none at all.

Scholars like Williams and Scott say that it will take more than nixing the controversial loophole clause from the 13th Amendment to fix the issues that Kanye West is talking about.

“There are ongoing debates among historians about whether the 13th Amendment was the cause for mass incarceration or if that would have happened regardless,” Williams says. For example, “if that loophole was eliminated today, would we see less policing of black communities? Would we see fewer discrepancies in how African Americans are sentenced for various crimes compared to white people convicted of the same serious crimes? I think those things would still exist. Fixing the 13th Amendment loophole will address one aspect of a broader system of criminalization that really infects every aspect of American society and is a much bigger problem than just the 13th Amendment.”

“Mass incarceration is a late 20th century problem and we act like it’s born with emancipation,” says Scott. “If you start tinkering with the 13th Amendment you might end up without one.” 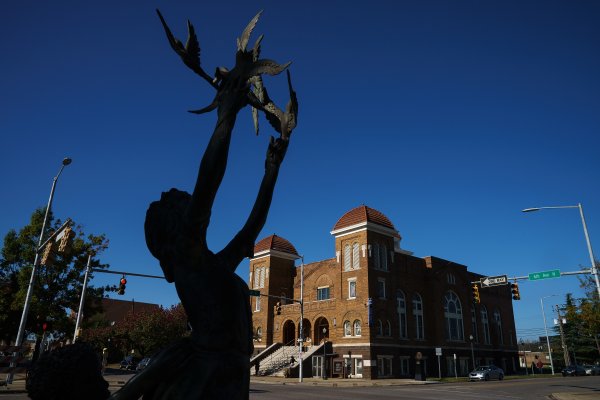 16th Street Baptist Church Bombing Survivors Recall a Day That Changed the Fight for Civil Rights: 'I Will Never Stop Crying Thinking About It'
Next Up: Editor's Pick