A Brief History of Voting Problems on Election Day

The U.S. has a long history of problems at the polling station—and not just the potentially agonizing choice over whom to vote for. From practical problems to intimidation, there are dozens of difficulties that have befallen Americans trying to have their voices heard. During the 2016 primary-election season, voters encountered problems ranging from long lines to incorrect registration rolls. And, as Tuesday’s general election gets underway, election protection groups are standing by to address any issues that voters may encounter.

A look at the history of voting problems in the U.S. reveals that, while Election Day has always been complicated, the ways in which voting has been made difficult over the years are consistent, and they fall into just two categories: problems of technology and problems of access.

If one thing can be said about the history of American voting technology, it’s that every voting mechanism has flaws.

Over the centuries, technological changes have provided new opportunities for errors and difficulties when voting. Voting by voice or color-coded ticket exposes voters to intimidation or vote-purchasing; voting secretly excludes those who cannot read or write. It can be hard to interpret a voter’s intention in a check box on a piece of paper, but mechanical voting machines can also malfunction; the hanging and dimpled chads of the 2000 election still loom large. Meanwhile, computerized machines haven’t fixed that problem: in 2004 Senator Barbara Mikulski of Maryland collected reports that voters in three counties never even saw the Senate primary on their voting machine screens.

But, while technology can be problematic, access—making sure that everyone who has the right and the desire to vote is able to do so—has always been the more troubling Election Day problem.

Perhaps the most straightforward form of trouble at the polls is being denied on sight. Women trying to vote in protest before the passage of the 19th Amendment were often turned away, though not unlawfully.

Meanwhile, others who did have the right to vote were often denied that right too—most notably African Americans.

Though Election Day violence and rioting was relatively common throughout the country in the mid-19th century—historian David Grimsted has counted 35 Election Day riots, and 89 deaths as a result of that violence, between 1828 and 1861—it was not always the result of spontaneous voter hysteria. Rather, even after the 14th Amendment guaranteed black men the same rights of citizenship that white Americans enjoyed, violence meant that in practice the right was only briefly enjoyed by the black population. Octavius Catto, a black man who had helped the Union in the Civil War, an intellectual and a skilled teacher, was shot in Philadelphia in 1871 for voting. When Indianapolis held city elections in May 1876, there were reports or African American voters being physically attacked at polling places. And in the presidential election of that year, one white supremacist in South Carolina demanded “every Democrat must feel honor bound to control the vote of at least one Negro, by intimidation, purchase, keeping him away or as each individual may determine.”

A letter from an African-American man headlined in the New York Times as “How They ‘Voted’ in Mississippi” described the intimidation that faced those who did get to vote, who were forced on threat of violence to vote the opposite of what they wanted. Reports of such tactics led to a congressional investigation, during which one man testified that in Louisiana “he saw fifty colored men marched up to the polls by a guard of white men and voted the Democratic ticket, being required to show their tickets before voting,” reported the Detroit Free Press.

And, both before and after that Reconstruction period—even into the 1960s—nonviolent methods of disenfranchisement were also widespread.

Voters might have to meet financial requirements. In the early 19th century, New York increased the amount of taxable property required for a black man to vote, even as such requirements were eliminated for others. Poll taxes became a ubiquitous method of disenfranchising blacks post-Reconstruction. Later, potential voters were sometimes falsely informed that they might be arrested for unrelated infractions like traffic tickets if they showed up to the polls, a scare tactic used in Texas in 1964 that was apparently still being used in New Jersey in 1996. Some were threatened or served with economic retribution in the form of loss of jobs, eviction or loan denial.

Voters might have to pass a test for literacy or “understanding.” The devious “eight box law” of 1882 in South Carolina was meant to confuse less-educated voters by giving each race for office a different ballot box, so that you had to be able to match your vote to the right box for that candidate, and periodically shuffling the boxes. These hoops developed into literacy tests—which were often nearly impossible to pass—that were long imposed on African Americans in the South. As late as the 1960s, voters might be asked convoluted logic questions that even an expert reader might get wrong. Restrictive laws about literacy weren’t just aimed at the poor or black voters: New York, home to immigrants for generations, adopted an English literacy requirement in 1921.

Or voters might find it was simply impossible to get to the polls. Lerone Bennett Jr. wrote in 1962 in Ebony about the strategies employed to make voting physically impossible for black voters in the south after the Civil War: “Armed white men were stationed on the roads leading to the polls ‘to prevent Negroes from seizing arms.’ In one Louisiana county, the polling places were located in an isolated wilderness. The whites gathered at the white church and were told, in whispers, how to reach the polls.” These weren’t the only manipulations, and tactics of brief or changing polling hours, last minute changes to polling locations or inaccessible locations persisted.

Get a book from our History collection with your paid subscription to TIME. Click here for more details.

Those concerns also persist today: in 2016 there are hundreds fewer polling places than there were two or four years ago. And, for example, a last-minute change to polling places has already affected Boise, Ida., residents. ProPublica’s Electionland project is monitoring reports of long wait times, problems with machines and registration around the country

In general, however, things have improved.

The 1965 Voting Rights Act helped make sure that tactics like literacy tests could no longer be used to disenfranchise African Americans. After 1975 congress required language assistance for minority groups in districts where they made up 5% of the population or numbered 10,000. A 1982 extension to the Voting Rights Act added protection for blind, disabled and illiterate voters. The 1990 Americans with Disabilities Act further required physical accessibility and accommodations for people with disabilities.

Though the laws are not executed perfectly—translation or assistance is not always available, lines are often long and the disabled may still encounter problems—there are provisions to help all eligible Americans cast their votes, regardless of race, gender, language or physical ability. On Tuesday, the U.S. puts those provisions to the test. 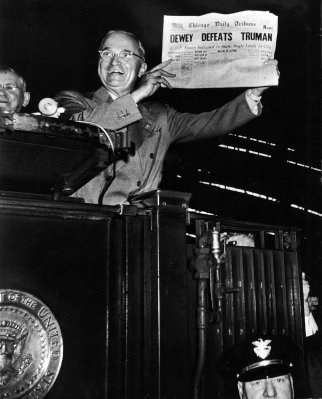 This Is What It Looks Like to Win the Presidential Election
Next Up: Editor's Pick