Voting by Mail Dates Back to America’s Earliest Years. Here’s How It’s Changed Over the Years

An illustration of Pennsylvania soldiers voting published in the Oct. 29, 1864, issue of Harpers's Weekly.
Library of Congress
By Olivia B. Waxman

Living through the COVID-19 pandemic has been compared to living through wartime. Now, the list of parallels is growing: according to a New York Times analysis, when Americans vote this November election offices could receive more than double the number of mailed ballots they received in 2016.

In the U.S., showing up in person to cast one’s ballot on Election Day has always been the standard way of exercising that fundamental right. But over the centuries, voting by mail has become an attractive alternative for many—thanks in large part to the influence of wartime necessity.

Even the scattered examples of absentee voting (the terms are often used interchangeably) that can be traced to the colonial era tend to fit the pattern: In 17th-century Massachusetts, men could vote from home if their homes were “vulnerable to Indian attack,” according to historian Alex Keyssar’s book The Right to Vote: The Contested History of Democracy in the United States, and the votes of some Continental Army soldiers were presented in writing “as if the men were present themselves” in Hollis, N.H., in 1775 during the American Revolution.

But it was during the Civil War that America first experimented with absentee voting on a large scale, as so many of the men who were eligible to vote were away from home fighting. During the 1864 presidential election—in which Republican incumbent President Abraham Lincoln defeated Democratic candidate George McClellan—Union soldiers voted in camps and field hospitals, under the supervision of clerks or state officials.

“Excuse-required absentee voting started during the Civil War—a product of the competition between Abraham Lincoln and George McClellan,” Paul Gronke, a professor of political science at Reed College and founder of the non-partisan Early Voting Information Center, told TIME in 2016. “Lincoln wanted to assure that he got the votes of the soldiers who were serving away from home.”

After the Civil War ended, the same logic held. In later conflicts, states increasingly made it possible for soldiers away from home to vote. During World War I, nearly all states let soldiers vote from afar “at least during war time,” according to Keyssar’s book. And it was in that same time period that people with a non-military, work-related reason for being away from home on Election Day started to be able to vote absentee, too. At the 1917-1918 Massachusetts Constitutional Convention, one delegate advocated for accommodating those “in industry”, arguing that railroad employees and traveling salesmen who are away from home on Election Day are “toiling and sacrificing…for the common good,” just as soldiers do.

Industrialization and the expansion of transportation options allowed people to travel far and wide in the growing national economy, making that argument all the more powerful. Some laws required witnesses and a notary public’s signature, but officials were looking for a way to make sure that people on the road could still have their electoral voices heard.

“In the early 20th century, we’re becoming a much more mobile country,” says John C. Fortier, author of Absentee and Early Voting and director of governmental studies at the Bipartisan Policy Center. “States will make exceptions for certain types of people, such as railroad workers, or people who are sick. There is a movement—not nationally, we do everything differently state by state—but of states adopting some form of voting for selected populations who met certain criteria.”

In the decades that followed, people who voted by mail generally had to have a specific reason for not being able to vote in person on Election Day. That began to change in 1978, when California became the first state to allow voters to apply for an absentee ballot without having to provide an excuse, according to Gronke.

Oregon also claims several firsts in the history of voting by mail. The first entirely mail-in federal primary election took place in the state in 1995, and the first mail-only general election took place in the state in 1996, when Ron Wyden was elected to the U.S. Senate to replace Bob Packwood, who resigned amid a sexual harassment scandal. Since 2000, after 70% of voters approved a ballot initiative instituting the program, Oregon has been an all vote-by-mail state.

As TIME reported in its recent roundup of state laws for voting by mail in 2020, five states were already holding entirely mail-in elections before the pandemic—Colorado, Hawaii, Oregon, Washington and Utah. Twenty-nine states and Washington D.C. allowed “no excuse” mail-in absentee voting, and 16 states allowed voters to cast a ballot by mail if they had an excuse. In the 2016 presidential election, about 1 in 4 voters cast their votes via ballots mailed to them. Despite claims of vote fraud when voting is conducted outside of polling places, only 0.00006% of the 250 million votes by mailed ballots nationwide were fraudulent, according to MIT political scientists who analyzed numbers from the Heritage Foundation’s Election Fraud Database.

Vote-by-mail programs, as Fortier puts it, are “generally not pulling more people into the voting place, except for making it more convenient for those who vote anyway.”

During a period of time full of uncertainties, election officials say American voters can count on vote-by-mail programs being “safe and secure.” What’s also certain is that the 2020 Election is another milestone in the centuries-long history of voting by mail. 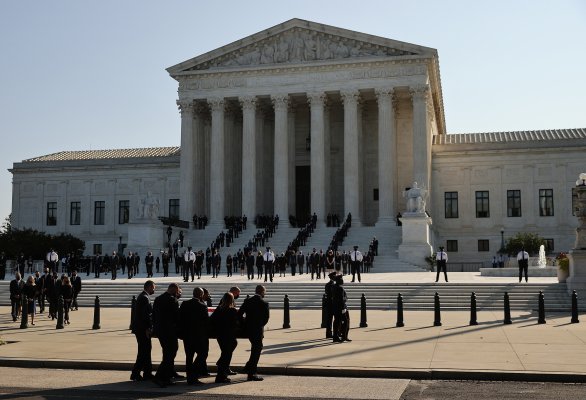 What Justice Ginsburg's Death Means
Next Up: Editor's Pick