The Proud Boys Are Part of America's Long History of Vigilante Violence. Here’s What to Know About the Group's Origins

During the first presidential debate on Tuesday night, when moderator Chris Wallace asked President Donald Trump if he would be “willing, tonight, to condemn white supremacists and militia groups, and to say that they need to stand down,” the President seemed to many to do the opposite.

While it wouldn’t be the first time the President failed to condemn white supremacists, his most recent comment—directed at an organization founded in New York City during the 2016 presidential election season and designated a hate group by the Southern Poverty Law Center—confused even members of his own party. On Wednesday morning, Tim Scott, a Black Republican U.S. Senator from South Carolina, told reporters that he thought the President “misspoke” and “should correct it.”

Speaking to reporters later that day, Trump indeed walked back his comments, asserting that he did not even know of the Proud Boys before former Vice President Joe Biden mentioned them in the debate as an example of a militia group. (At least one outlet has linked former Trump adviser Roger Stone to the group, and President Trump’s FBI has called them an “extremist group.”)

Members of the Proud Boys, however, saw his remarks differently, celebrating online and vowing to stand by, an expert monitoring their social media posts told TIME. On Twitter, Kathleen Belew, author of Bring the War Home: The White Power Movement and Paramilitary America and an assistant professor of History at the University of Chicago, warned that such an interpretation was no surprise: Trump’s shout-out sounded like a call to arms, she wrote—a “green light” that could be “catastrophic.”

And, Belew noted, the story goes beyond any one organization. Though the Proud Boys were the only group mentioned by name during the debate, they are part of a movement that goes back “decades, if not generations.” TIME spoke to Belew about the origins of that movement and where the Proud Boys fit in that history.

TIME: What’s going on in American history when the movement that produced the Proud Boys begins?

BELEW: Right after the Vietnam War, there was this huge narrative about the government betraying soldiers in Vietnam. The far right was able to use that narrative to bring together a whole bunch of people who had not been able to band together in common cause before. Here, I’m talking about Klansmen, Neo-Nazis, radical tax resisters, followers of a white religion called Christian Identity, and a whole bunch of white separatists and white supremacists. They all came together in the late 1970s and called themselves the white-power movement.

At the Aryan Nations World Congress [in 1983], several people reported that there was a meeting where activists decided to wage war on the federal government. Nobody was in the room who wasn’t an activist so we have to take everything they say with a grain of salt, but we can measure a real change in movement tactics after that meeting, where they started doing things like targeting infrastructure and government agents. They have no more hope for political change at that point. The kinds of changes these activists wanted were so extreme that even under Reagan, even under a conservative Executive, they didn’t think they could ever achieve things they wanted.

Then across the 1980s and 1990s, this movement begins to figure out how to capitalize on changing culture in order to bring in bigger and bigger groups of people. The first group it brings in are the skinheads in late 1980s. The skinheads are a lot younger. They’re in cities instead of in rural areas and suburbs, and it lets the movement get this inflow of younger membership. And then the second thing that happens is the militias.

How would you define a militia in this context?

The paramilitary white-power movement in the 1980s has often been thought of as separate from the militia movement, but actually I think it’s more instructive to think about them as a Venn diagram. The larger circle is the militia movement, and then mostly, but not entirely contained inside it is a smaller but much more violent and radical white-power movement. There are militiamen and militia groups that are not white power, but there are very few white-power groups in the 1990s that are not militia.

All of it is paramilitary and by that I just mean characterized by military uniforms, language, weapons, et cetera, even though it’s not conducted within the military. They tend to be highly organized, and they tend to be organized most vociferously around opposing the federal government and around gun rights. So a white power militia would take that frame and then add on a whole bunch of stuff—for instance, the assumed attack on the white birth rate and things like that.

From the 1990s forward, the guns, the weapons, the people, the money flow from those earlier white-power groups into militias. That gets us to the Oklahoma City bombing in 1995, the largest deliberate mass casualty on American soil between Pearl Harbor and 9/11. But most people still don’t understand what it was and or what it meant. That bombing was the work of a movement, not a few disaffected people.

Hundreds of far-right Proud Boys and their supporters held a rally in Delta Park in Portland, Ore., on Sept. 26, 2020.
Mark Peterson—Redux

Is that building targeted for a certain reason? What did it mean to white power groups?

It has structural-integrity advantages. It has a glass facade and a place you can park a truck. It also housed federal government employees, and so it was seen as a hit on the federal government. After the Oklahoma City bombing, there was an upflow in militia activity, and then also a whole bunch of people began to use the Internet much more. It’s important to note they had been online since 1983 and 1984.

How are they online that early?

They are way early. They are pioneers. What they’re using is early computer message boards that are code-word accessed. On the message board they posted things like ideologies, but also things like personal ads. So effectively what they were doing was Facebook before Facebook was even invented.

Where do the Proud Boys fit into this history?

Fast forward to now: What we’re seeing is the re-emergence of something that has been there this whole time. I’d characterize Proud Boys as a group that straddles the line between militia and a white-supremacist fight club. It’s commonly noted they are in some instances a multiethnic group. Weirdly this is not that atypical, but it is a white-supremacist group. They do believe in the primacy of western culture, and they believe that other places are dirty and degraded. They don’t like Islam. They don’t think very highly of women.

For me, the Trump comment, however he meant it, was heard by white-power activists as a call to arms. This has been a paramilitary movement that very easily understands what “stand by” means in the context of a military campaign. That means [be] preparedly ready. He didn’t say “stand down,” which means something completely different. And we know that has hit home with these groups. We see them incorporating it in their slogans and badges. We see them retweeting about it all the time. To me, it’s not even just about the Proud Boys; it’s about all of the other groups that are emboldened by this. Even if Trump didn’t mean it, it’s very difficult to unring this particular bell.

And Wednesday, when he was speaking to reporters, he did say “whoever they are, stand down.”

The important thing is how they heard it, because I think it will very likely result in violence, and you just cannot undo a statement like that. And also, not for nothing, a Proud Boys [member was was at least partly] responsible for [organizing] the Unite the Right rally in Charlottesville. So for Trump not to know about them is a flagrant failure of his presidency.

How do the militia groups that expand after the Oklahoma City Bombing compare to the militias that existed in the early U.S.?

That’s a great question. Absolutely not. The militias I’m describing are just late 1980s forward. What we’ve seen before that like, the Second Amendment militias in early America, has not existed since the Dick Act [of 1903]. The act incorporates militias into the National Guard. They’re regulated. Historians of early America wouldn’t recognize these [modern] militias as a continuation of that tradition.

What about vigilante racial violence in the Jim Crow era? How are present-day militias connected to that history?

This is part of that longer thread of vigilante violence for sure. And by vigilante, I simply mean extralegal violence that is attempting to preserve status quo power or systemic power. With my undergraduates, I get into a definitional debate [about] when something stops being vigilante and begins to be revolutionary— meaning, at what point do you stop supporting the system of power that’s already in place and start attempting to overthrow it?

The white-power movement has mostly been a revolutionary movement—and I say that in no positive connotation at all but rather to just say, it has mostly been interested in overthrowing the federal government rather than supporting it. So I think one of the questions people ought to have is, if these groups were to come out and support Trump in some way, what would they do after that? Because I don’t think that all of them are genuine supporters of any American leader.

Do the culture wars that are getting going in the late 1970s, the 1980s and the 1990s play a role in fanning the flames of the white-power movement?

Yes and no. The people who join the white power movement largely do so because they don’t see another place for themselves in the nation. So part of that has to do with feeling unrepresented in the culture, part of that has to do with rising fundamentalism, not that those are the same thing, but they’re overlapping Venn diagram circles. Then of course, there’s the post-Vietnam frustration, general economic frustration, so some of it is coming out of the historical context.

Why would warfare make people feel this way? Was this about veterans’ struggle for re-entry?

That’s the question I had that started the book. It turns out there are also a lot of people who weren’t there and didn’t fight but claim the war as part of their identity anyway, so I think it has to do with how all of our society is mobilized in wartime. Doing violence somewhere else ricochets back into the nation in ways that we don’t always anticipate.

People should really push back when they read about “a lone wolf.” There are such things as individual acts of violence, and even mass violence or apolitical acts of mass violence, but there is not a white-power lone wolf attack. It is a movement.

Yes and no. They tack onto the prevailing frustrations of the moment. They’re always trying to recruit.

When you say the white power movement tacks onto what’s happening in the news, have any notable examples galvanized them recently?

I think the Trump election is what brought this to Charlottesville, but then Charlottesville brings them to the next event. It springs up from itself once it gets going, so it’s a momentum kind of thing. One of the concerning things today is that we are in a rising tide kind of a moment. It’s going to keep going up until we stop it. 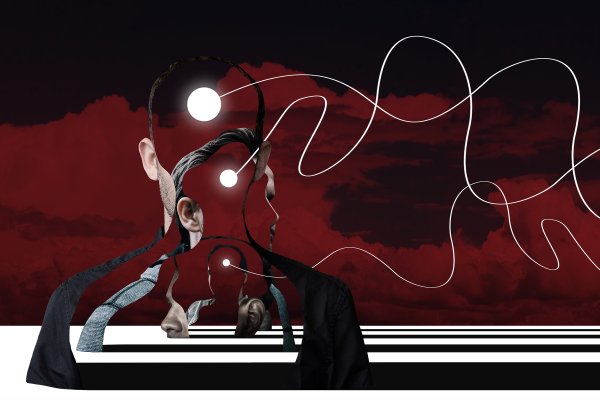 The Dangerous Quest to Understand the Minds of Extremists
Next Up: Editor's Pick