Clashes over a show of white nationalism in charlottesville turn deadly 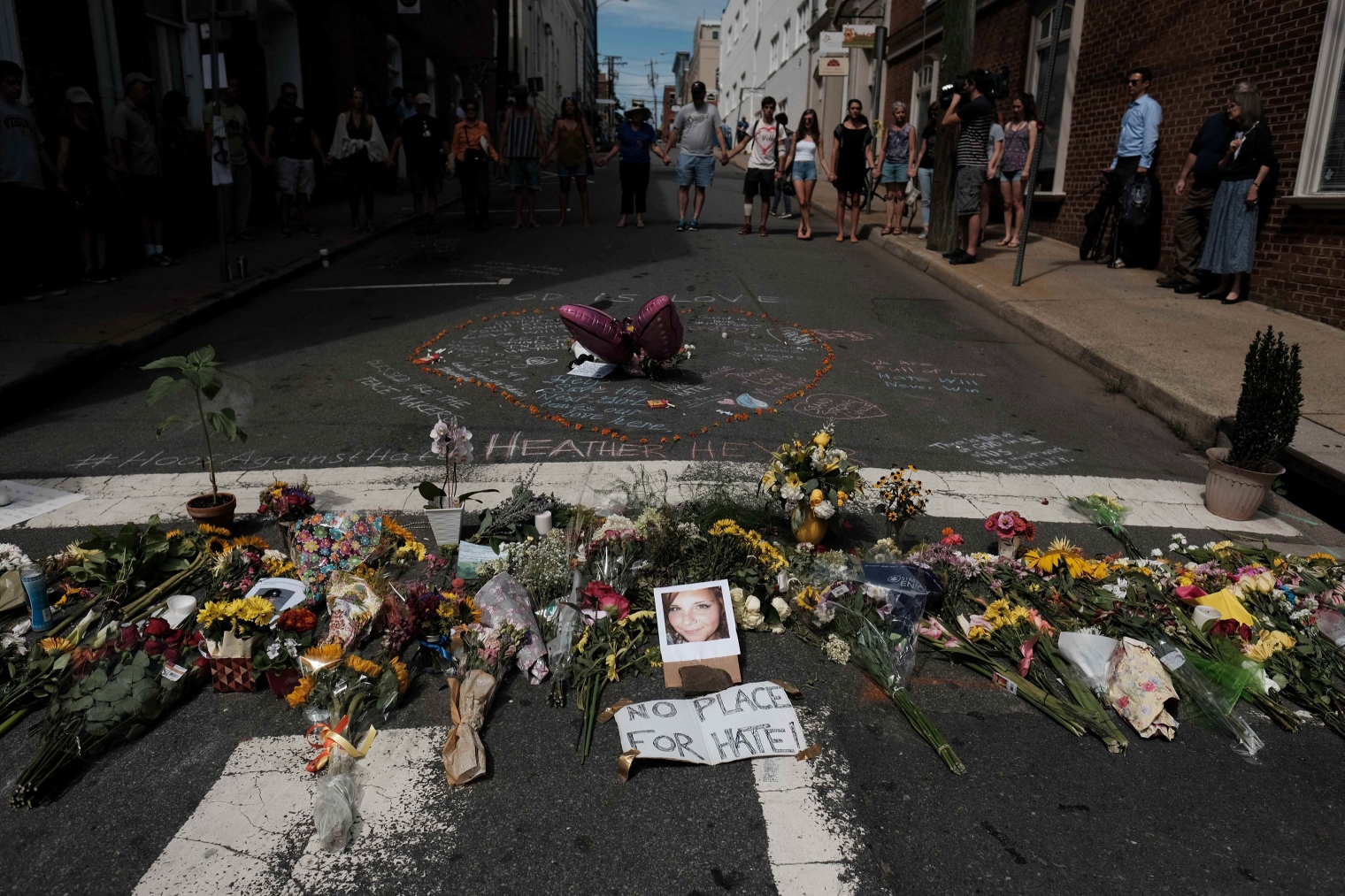 Flowers and a photo of car-ramming victim Heather Heyer lie at a makeshift memorial on Aug. 13. Justin Ide—Reuters

Violence erupted in the college town of Charlottesville on Aug. 12 after hundreds of white nationalists and their supporters who gathered for a rally over plans to remove a Confederate statue were met by counter-protesters, leading Virginia’s governor to declare a state of emergency.

Clashes broke out between the white nationalists and counter-protesters; the “Unite the Right” rally at a park once named for Confederate Gen. Robert E. Lee was deemed unlawful. At one point in the afternoon, a vehicle drove into a crowd of counter-protesters marching through the downtown area before speeding away, resulting in one death and leaving more than a dozen others injured. State police later reported the crash of a helicopter that was monitoring the events in Charlottesville, killing two troopers.

President Trump addressed the violence in televised remarks from New Jersey, condemning an “egregious display of hatred, bigotry and violence on many sides” and calling for the “swift restoration of law and order.” Among his critics was Sen. Ron Wyden of Oregon. “What happened in Charlottesville is domestic terrorism,” Wyden tweeted. “The President’s words only serve to offer cover for heinous acts.”

The night before Saturday’s violence, hundreds of white nationalists marched through the University of Virginia campus while carrying burning torches. — Andrew Katz

Warning: Some of the following images are graphic and might be disturbing to some viewers. 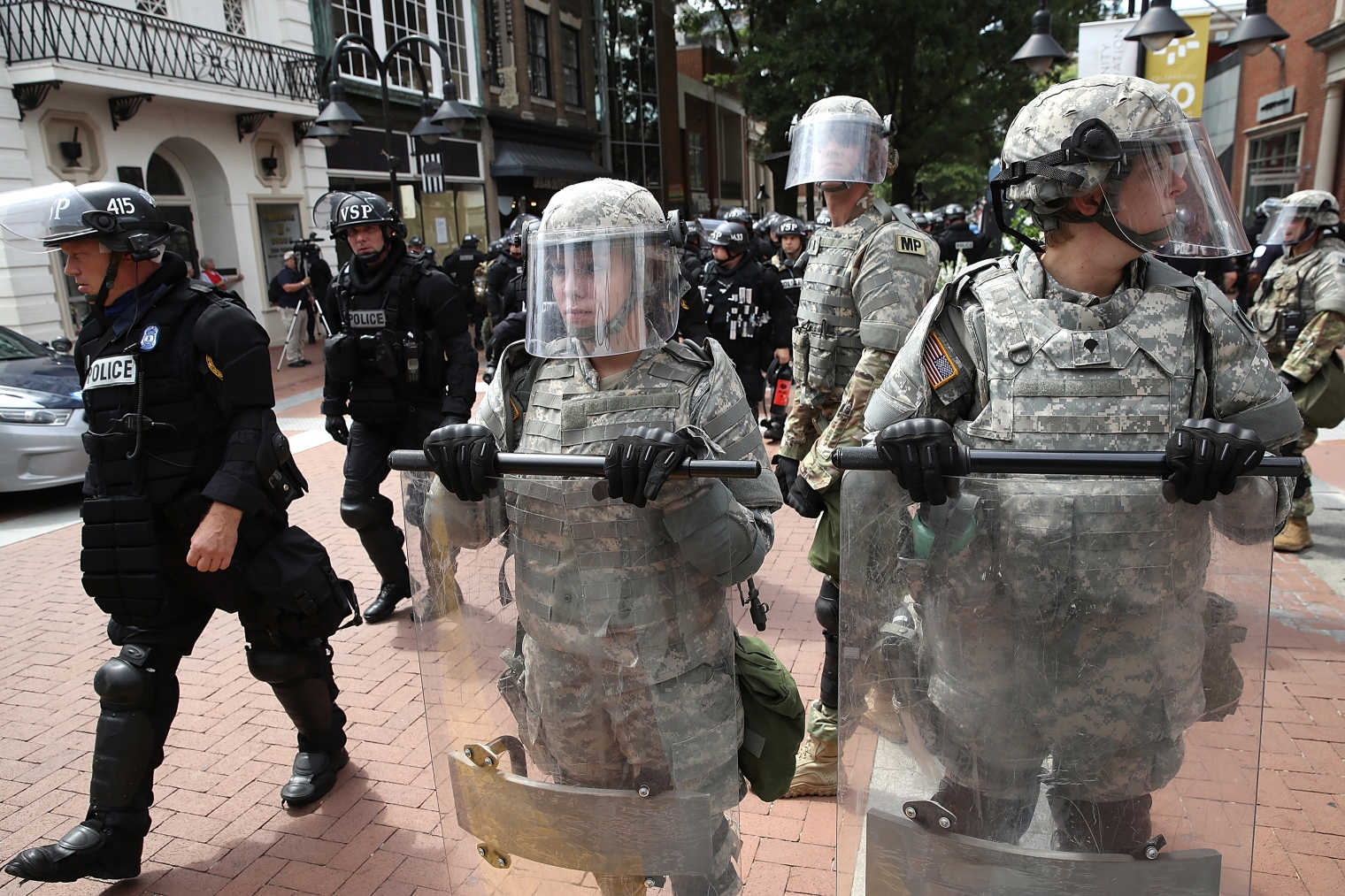 Police and members of the National Guard patrol near where a car plowed into a crowd marching through Charlottesville’s downtown. Chip Somodevilla—Getty Images 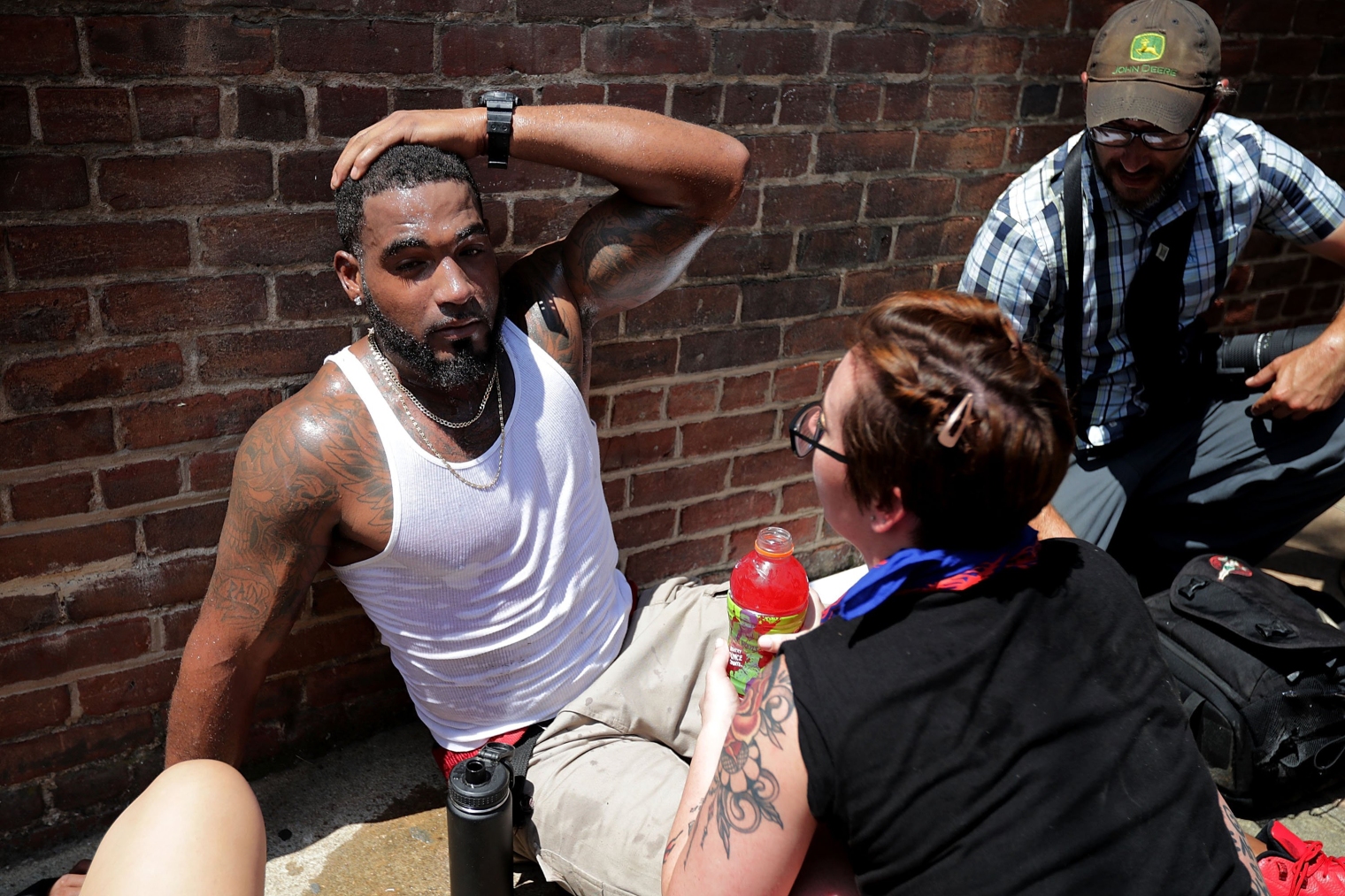 Rescue workers and volunteer medics tend to people who were injured after a car plowed through a crowd of counter-demonstrators. Chip Somodevilla—Getty Images 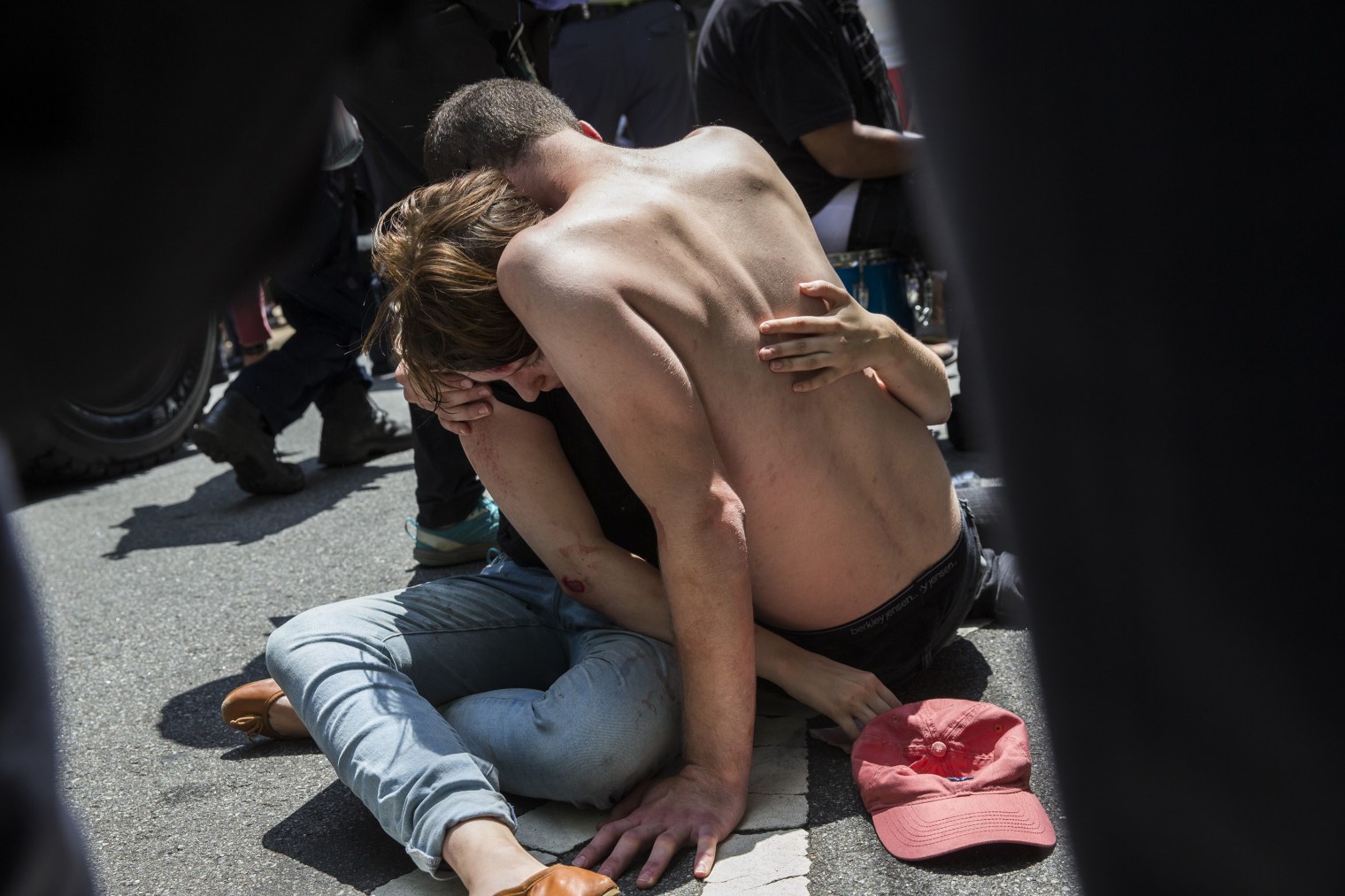 A man embraces an injured woman after a car rammed into a crowd of anti-white nationalist protesters. Samuel Corum—Anadolu Agency/Getty Images 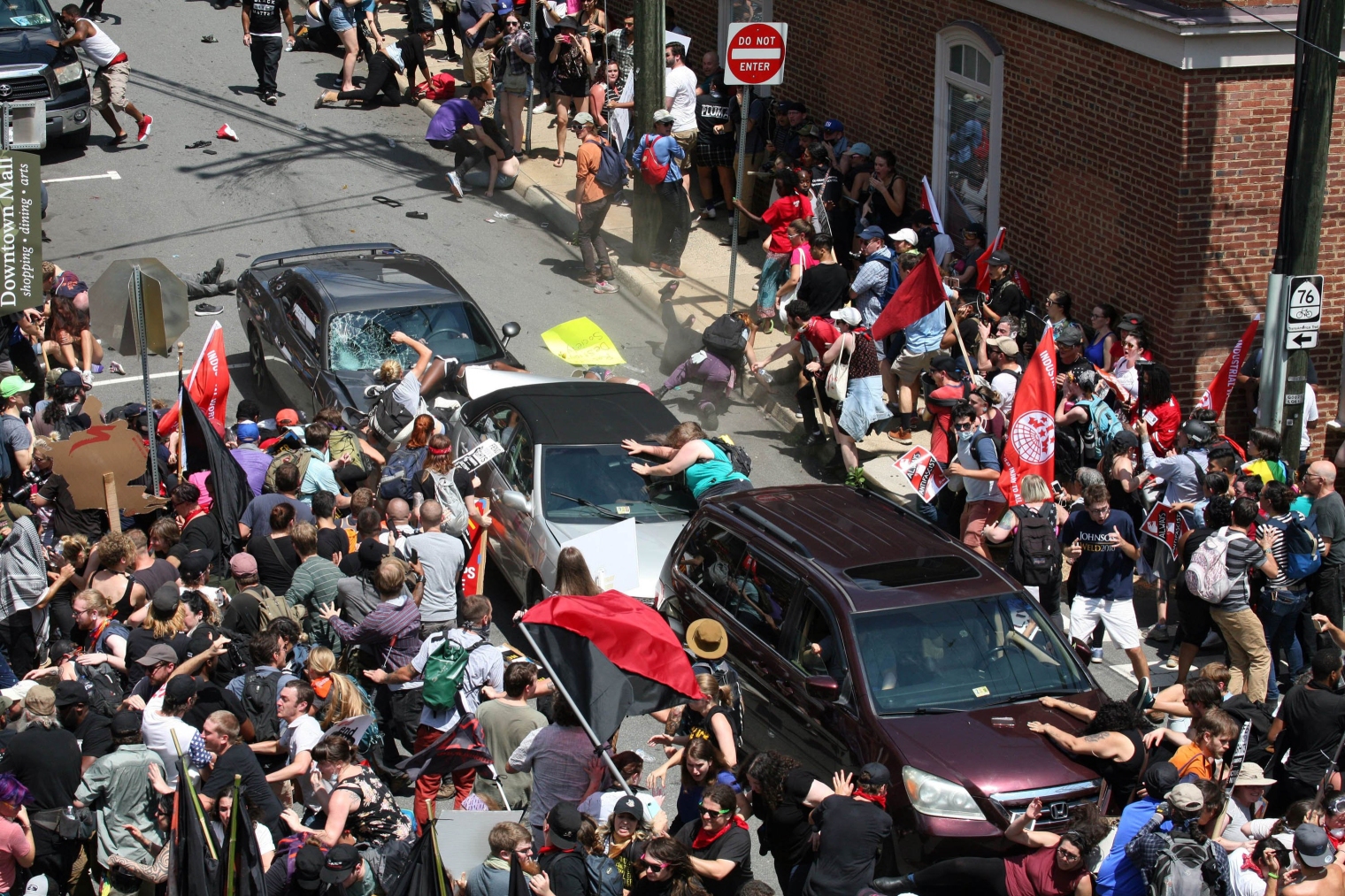 A car plows into pedestrians and vehicles as anti-“Unite the Right” counter-protesters march through downtown Charlottesville. The driver backed up and fled the scene. Jeremiah Knupp—Special to The News Leader-USA Today Network/Sipa USA 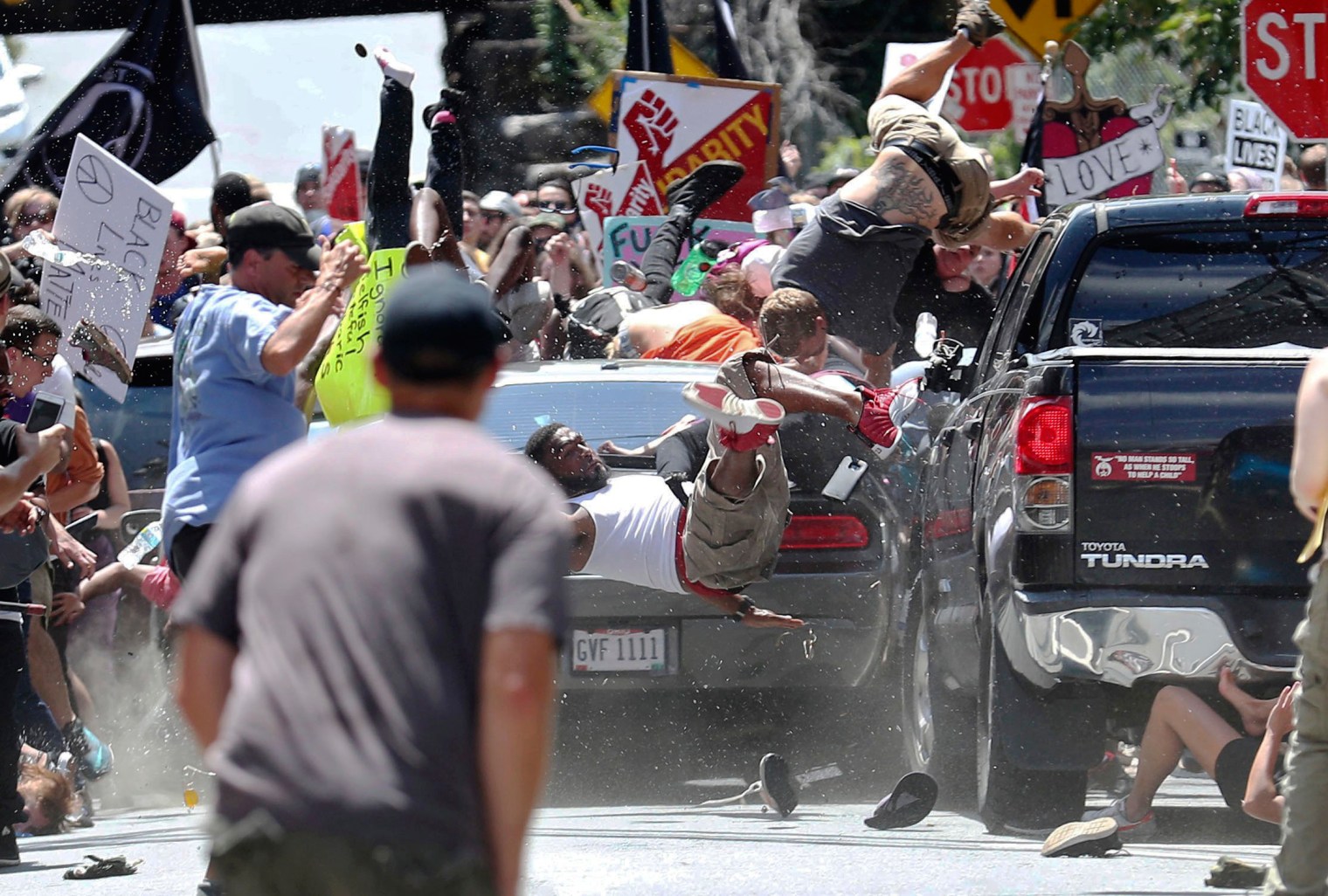 People fly into the air as a vehicle drives into a group of protesters demonstrating against a white nationalist rally. Ryan M. Kelly—The Daily Progress/AP 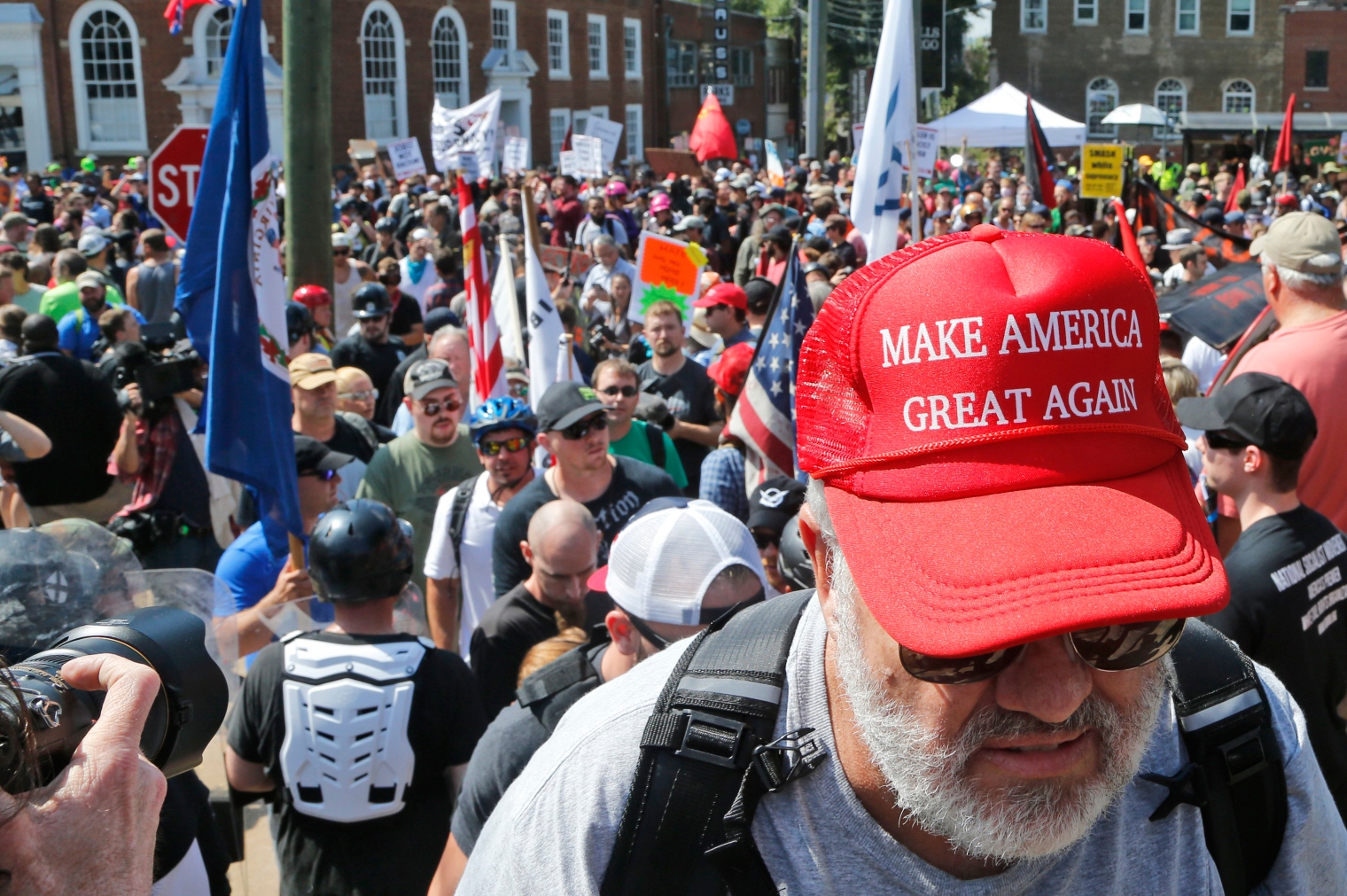 A man attending the “Unite the Right” rally walks into the Park. Steve Helber—AP 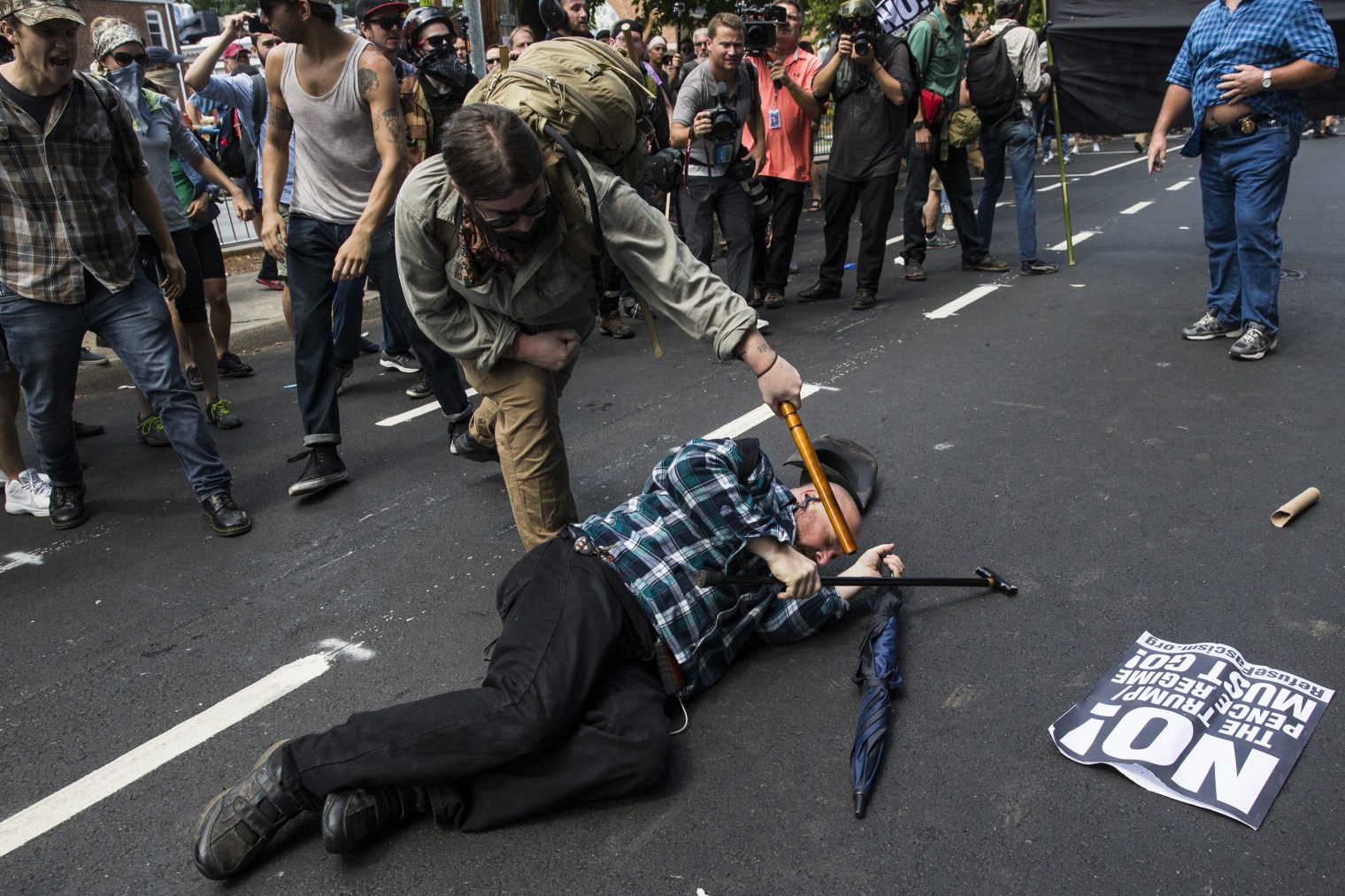 A counter-protester strikes a white nationalist with a baton. Samuel Corum—Anadolu Agency/Getty Images 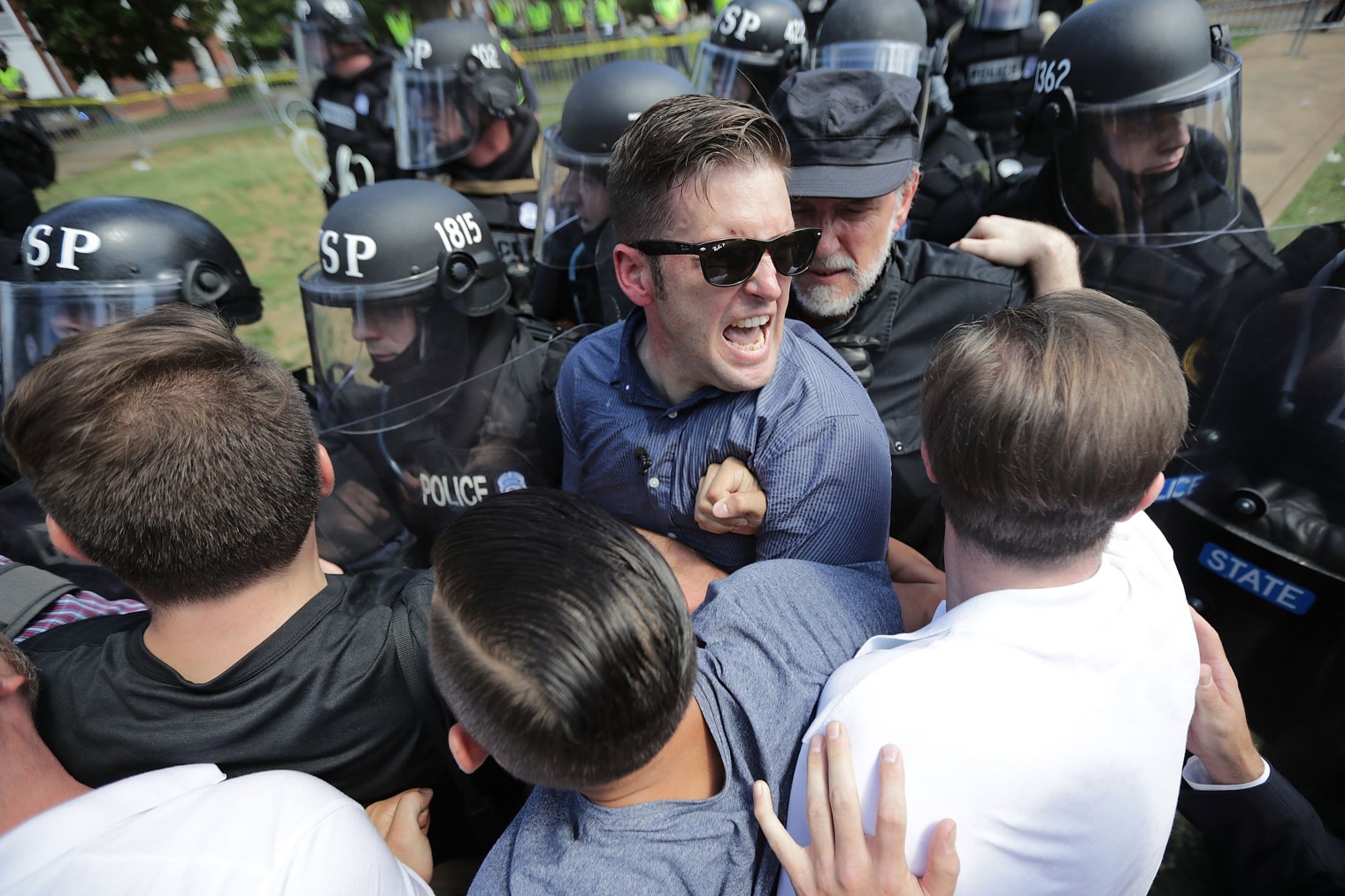 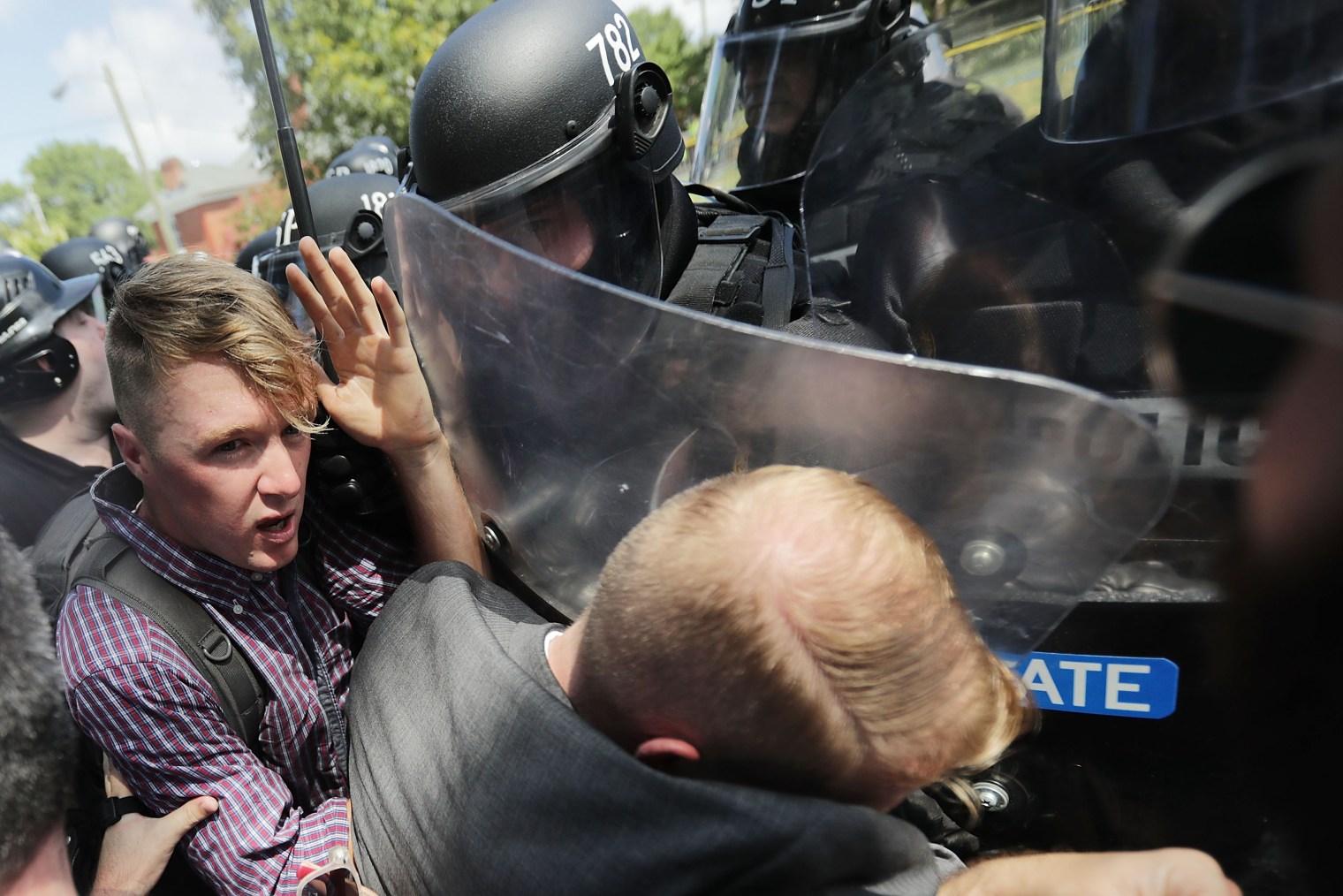 White nationalists are forced out of Lee Park after the “Unite the Right” rally was declared an unlawful gathering. Chip Somodevilla—Getty Images 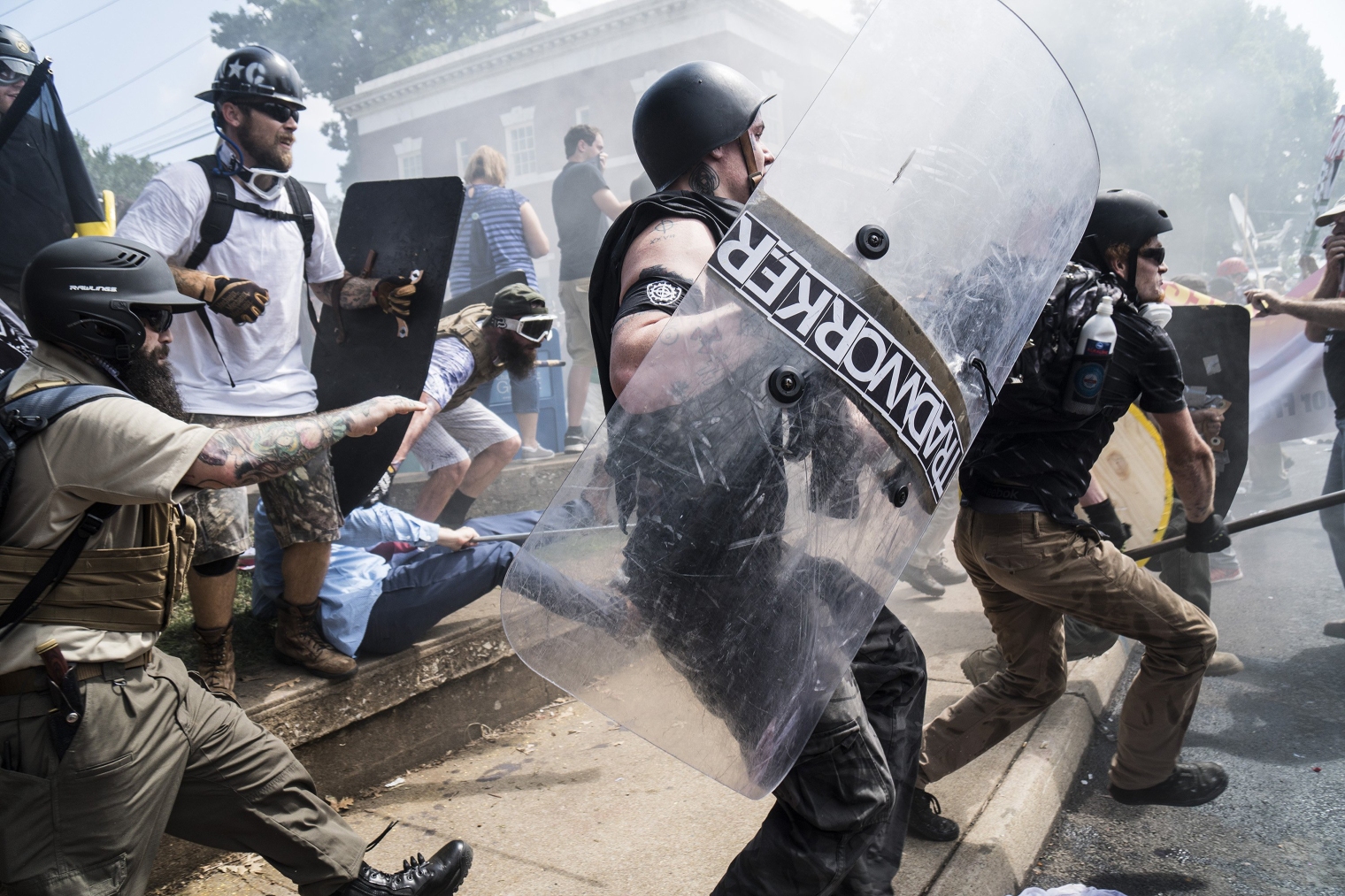 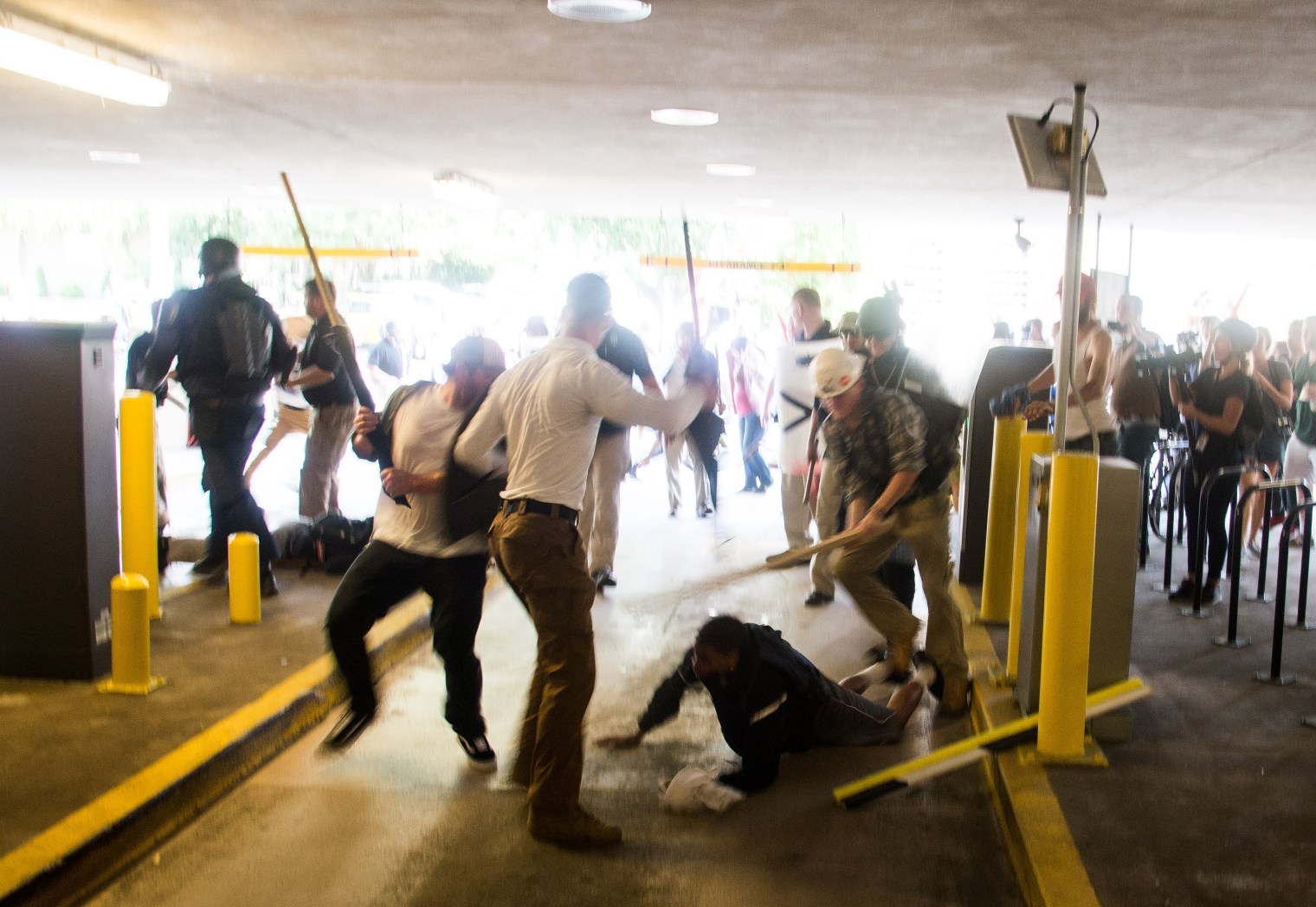 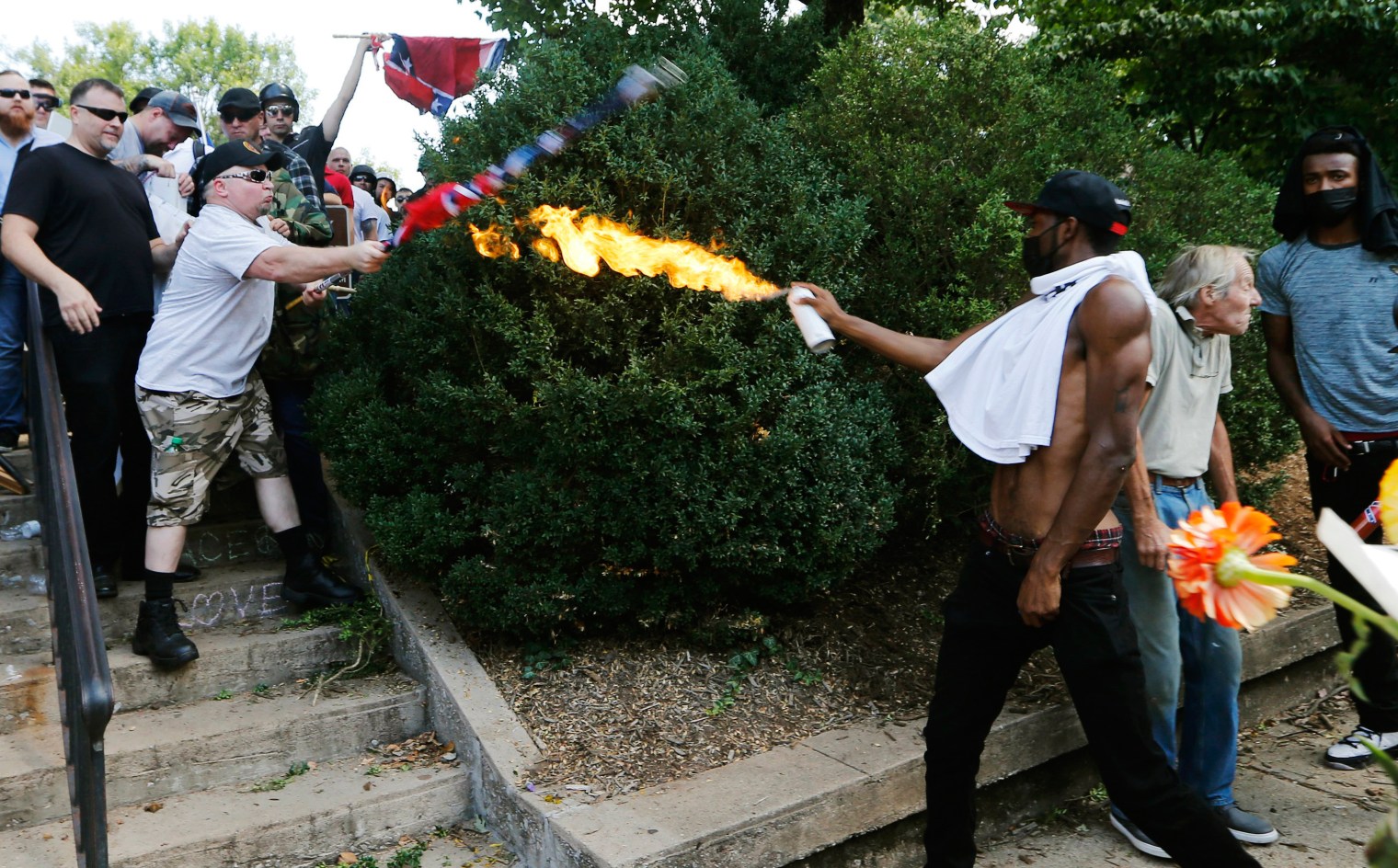 A counter-protester uses a lighted spray can against a “Unite the Right” demonstrator at the entrance to Emancipation Park. Steve Helber—AP 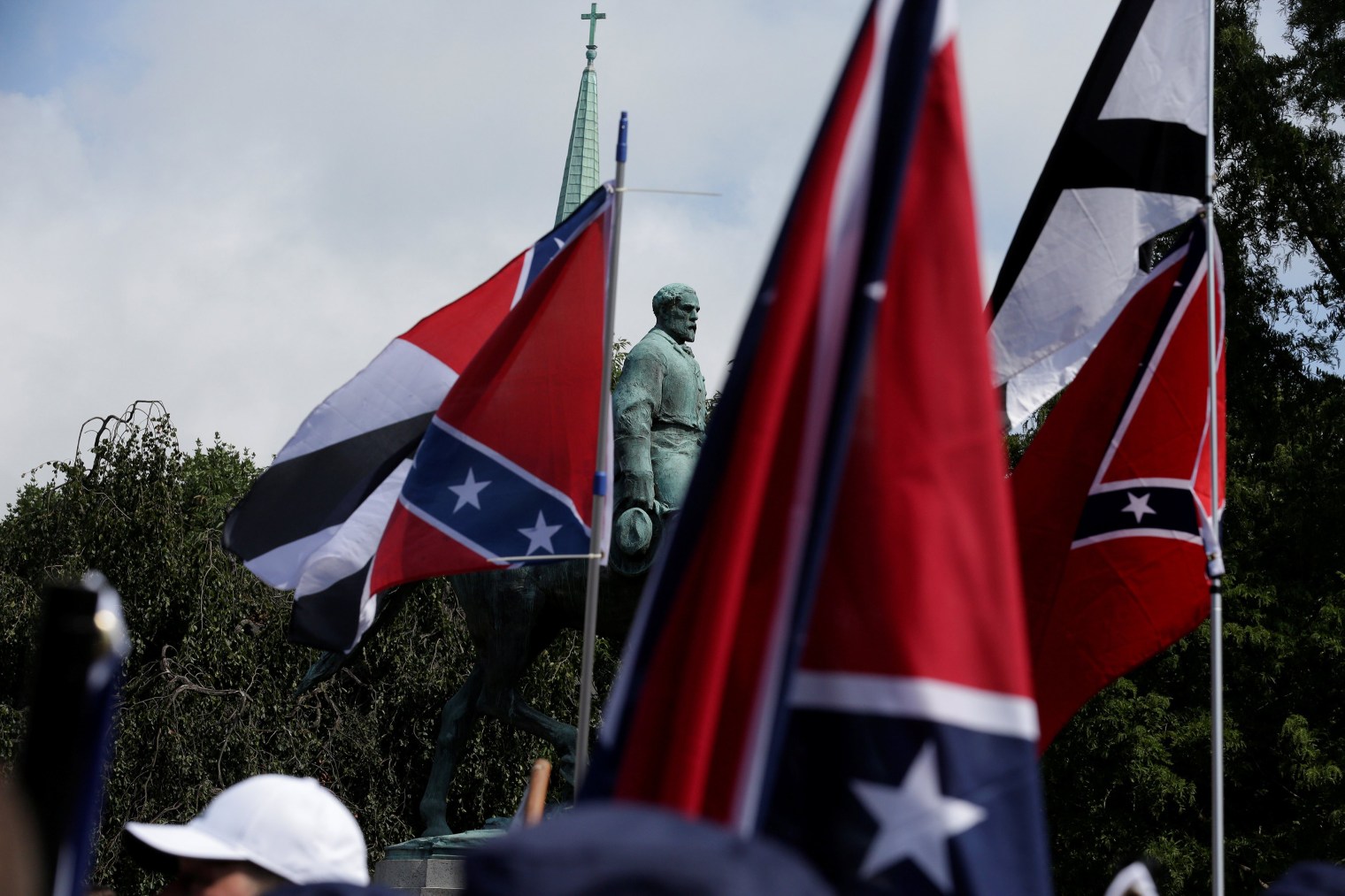 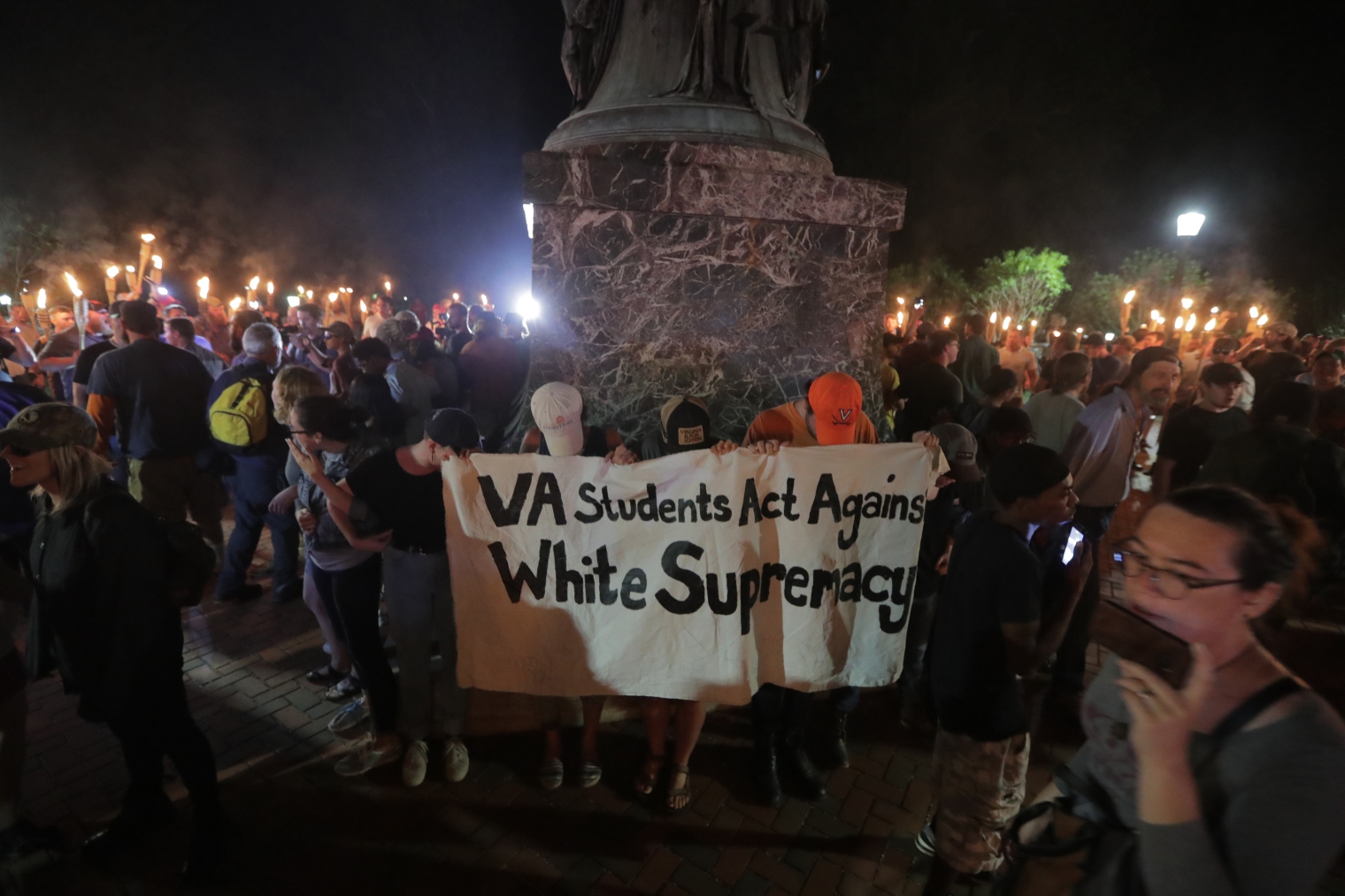 Counter-protesters against the white nationalists who gathered on the University of Virginia campus stand at the base of a Thomas Jefferson statue on Aug. 11. Andrew Shurtleff—The Daily Progress 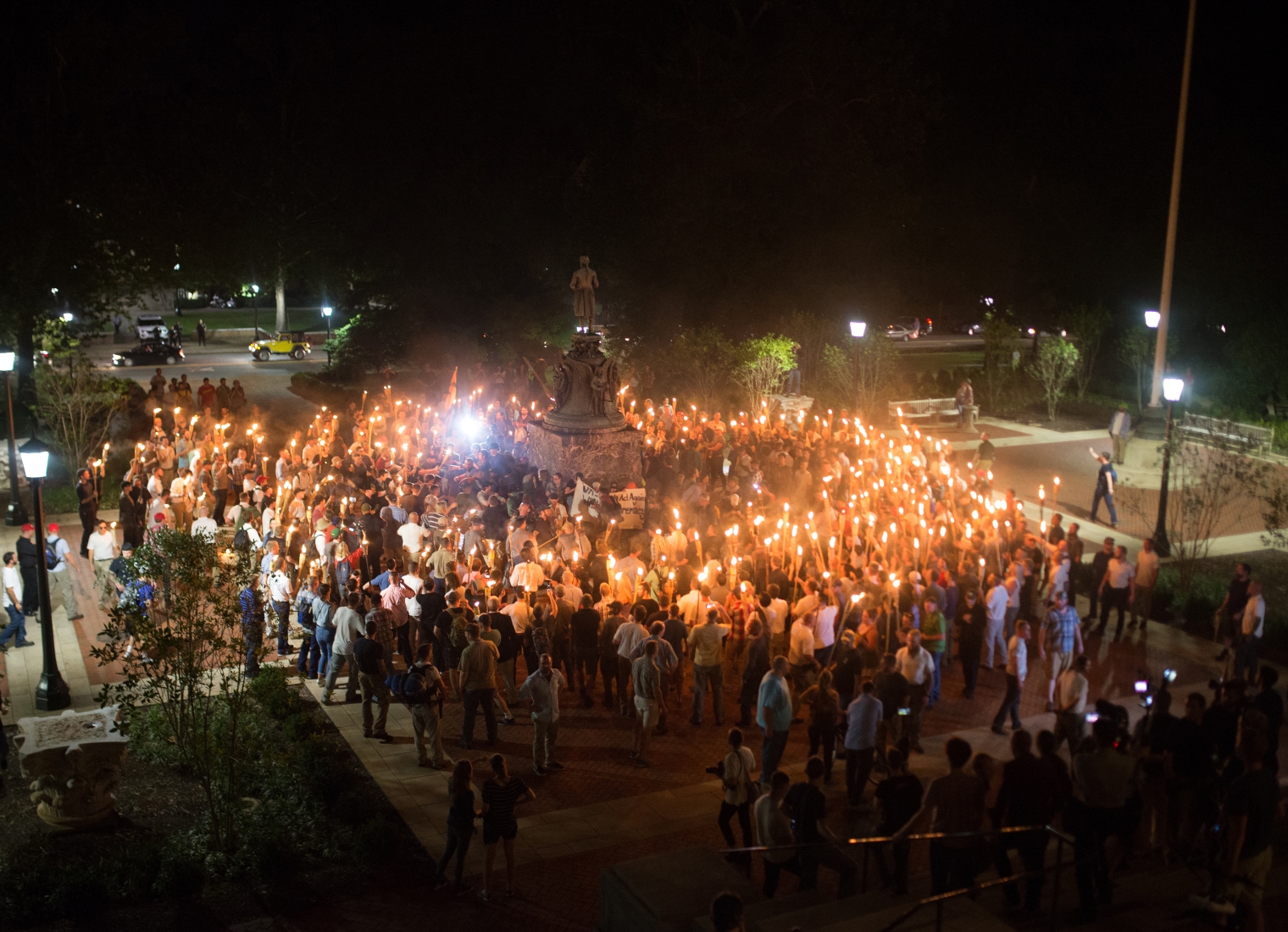 White nationalists encircle counter-protestors at the base of a statue of Thomas Jefferson after marching through the University of Virginia campus with torches on Aug. 11. Zach D Roberts—NurPhoto/Getty Images 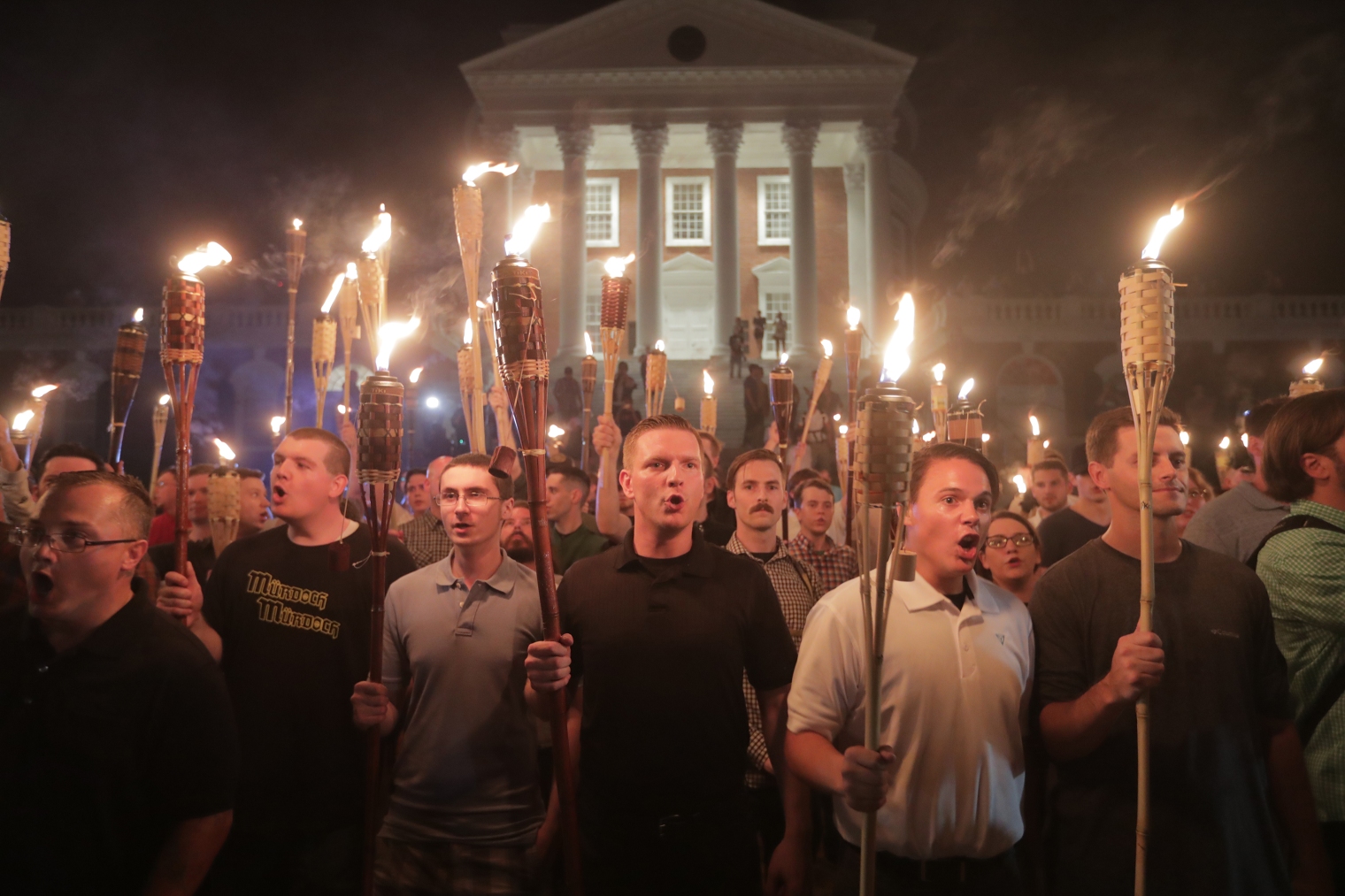 Correction: The original version of this article misstated the number of deaths that resulted from the car incident. One person died, not at least three people.