The First 2020 Presidential Debate Was Nasty, Brutish and Long

By Molly Ball and Charlotte Alter

It did not take long for the first presidential debate of the 2020 general election to spiral totally out of control. President Donald Trump simply would not stop talking—badgering, heckling, taunting and sniping at both his opponent and the moderator. Finally, Joe Biden could only blurt, “Will you shut up, man?”

Trump, of course, did nothing of the sort.

It was, in a way, a perfect metaphor for the Trump presidency: two professionals sighed and remonstrated and strained to enforce the rules, while Trump gleefully ignored them and refused to back down, putting on a show of dominance and creating a fact-free haze that made substance hard to discern. It wasn’t pretty, but had you landed fresh from Mars knowing nothing about American politics—lucky you!—you would have gotten an accurate sense of both candidates’ dispositions, if not their policy positions.

“That is simply not true,” Biden kept insisting, as Trump called him an idiot, smeared his family and concocted wild conspiracy theories about everything from the Obama administration to the upcoming election. “It’s been totally discredited.” Yet neither the Democratic nominee nor Wallace managed to wrest back control of the proceedings, and Biden struggled to land sharp attacks on Trump’s weaknesses.

It was like a tennis match gone horribly wrong: an aging pro who’s a little rusty; a seasoned chair umpire; and an opponent on the other side of the court who just happens to be a rampaging rhinoceros. Some people will be appalled when the rhino starts trampling things. But others will root for the rhino.

It was Trump who had the most on the line in the proceedings. The incumbent has trailed Biden in the polls for months, doing little to broaden his appeal beyond his hard-core supporters. Wallace tried to steer both candidates to address serious issues facing the country, from the pandemic and economic collapse to racial justice, health care and the Supreme Court. But the noisy melee that ensued did little to clarify and much to confuse.

On COVID-19, for example, Biden criticized Trump’s handling of the pandemic, saying, “A lot of people died, and a lot more are going to die unless he gets a lot smarter.” Trump interrupted him mid-sentence. “Did you use the word smart?” he glowered, pointing Biden’s middling academic record nearly a half a century ago. “There’s nothing smart about you, Joe.”

The night started out almost conventionally, with a testy but typical exchange over whether Trump’s Supreme Court nominee, Amy Coney Barrett, should be confirmed in the middle of a Presidential election. Trump argued it was his prerogative as the winner of the last presidential election, while Biden argued that a Justice Barrett would overturn the Affordable Care Act and Roe v. Wade.

But the discussion went off the rails from there. Biden had clearly prepared to counter Trump’s hectoring style. “Here’s the deal, the fact is, everything he’s saying is simply a lie,” he said early on. But Trump blazed ahead, repeatedly interjecting during Biden’s answers. The Democratic nominee and the moderator both seemed dazed by the President’s sheer aggression. Like so many who have tried to insist on rules and norms and propriety in the Trump era, they realized too late that being right doesn’t matter if you have no way to enforce it.

When Biden did have an uninterrupted moment, he frequently spoke straight to the camera, trying to speak directly to the American people and rise above the fray. “How many of you got up this morning and had an empty chair at the kitchen table because somebody died of Covid?” he said at one point. Later, after Trump dragged him into bickering about Hunter Biden’s business dealings, Biden attempted to change the subject: “This is not about my family or his family, it’s about your family.” By that point, it was unclear why any such regular person would still be watching a debate this unpleasant.

One of the debate’s most striking moments was Trump’s response to a question about his response to white-supremacist violence. Rather than back away from charges that he embraces white supremacists and plans to disrupt the election, Trump seemed to double down. “Proud Boys,” he said, directly addressing a violent hate group, “stand back and stand by.”

As he has throughout the campaign, Trump tried to drive home the idea that Biden is captive to the “radical left.” Biden parried the attack, saying he did not favor doing away with private health insurance or defunding police and pointing out that he’d taken plenty of heat for his centrist views in the Democratic primary. “The fact of the matter is, I beat Bernie Sanders,” he said. Biden also tried to distance himself from the progressive “Green New Deal,” and outlined his own climate plan, but at one point seemed to conflate the two, saying, “The Green New Deal will pay for itself.”

The candidates sparred on familiar ground over the pandemic, with Biden criticizing Trump for downplaying it at the outset and failing to contain it, while Trump accused Democratic governors of imposing unnecessary lockdowns to depress the economy and hurt his reelection. Trump claimed credit for the return of Big Ten college football, pledged a vaccine would be available soon (despite his own administration’s statements to the contrary) and decried the empty streets of New York City. “People want to get back to their lives,” he said. Biden shot back, “People want to be safe.”

At the end of the brutal 90-minute debate, Wallace raised the matter of whether the candidates would respect the outcome of the election. Once again, Trump evaded the question. The President urged his supporters to “go into the polls and watch very carefully” because “bad things happen in Philadelphia,” an overwhelmingly Democratic city whose machine-dominated politics have long been the focus of conservative suspicions. “They cheat,” he added, without evidence. (Most election experts agree that voter fraud is extremely rare.)

Trump closed the night with attacks on Biden’s son Hunter, accusing Democrats of trying to “do a coup,” blasting “Crooked Hillary” Clinton and accusing the Obama administration of “spying” on his 2016 campaign. Biden ended the night with a plea to voters to end the chaos they had just endured.

And then, mercifully, it was over.

“President Trump, Vice President Biden,” Wallace said with a weary chuckle, “it’s been an interesting hour and a half.”

Correction: The original version of this story misstated Vice President Biden’s quote telling Trump to “shut up.” He said “Will you shut up, man?” not “Man, would you shut up?”

Write to Molly Ball at molly.ball@time.com and Charlotte Alter at charlotte.alter@time.com. 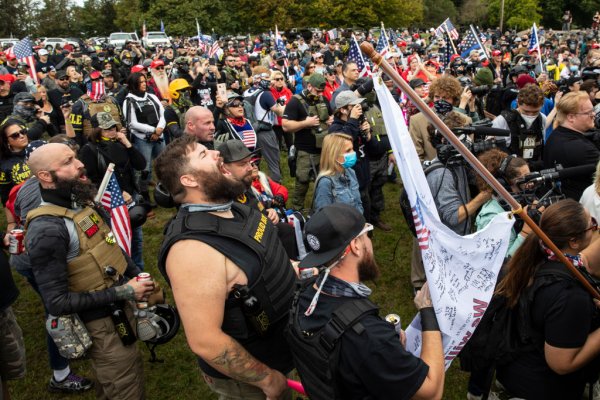