Why Are Thai Protesters Risking Up to 15 Years in Prison to Criticize the Monarchy?

A protester holds up a sign at a rally in Bangkok, Thailand on Aug. 16, 2020.
LILLIAN SUWANRUMPHA—AFP/Getty Images
By Laignee Barron

For years, Thailand’s powerful monarchy has been the untouchable third rail of the country’s politics.

A strict lèse-majesté law ostensibly insulates the royal institution from defamation, but in practice stifles discussion of the wealthy sovereign with the threat of up to 15 years in prison. This summer, that deterrent failed.

Grievances once limited to hushed conversations have exploded into the open as a new generation of Thai activists publicly airs frustrations with the existing system of governance — including their ruler’s role in it.

“We dream of a monarchy that coexists with democracy,” Anon Nampa, a human rights lawyer and prominent activist reportedly told crowds on Aug. 16 in Bangkok. In one of the kingdom’s largest demonstrations since the 2014 coup, more than 10,000 people converged around the Democracy Monument built to commemorate the end of absolute monarchy in 1932.

“We must achieve this within our generation,” Anon said to cheers.

Student-led groups have staged near daily protests across the country since last month, calling for parliament to dissolve, for the military-drafted constitution to be rewritten and for an end to the harassment of activists. They’ve given the government a September deadline to meet their demands, or else say they will fan the protest flames — no small threat in a country that has been hounded by chronic upheaval and putsches.

The movement, which has traversed the country, has brought motley cliques together, from LGBTQ activists to environmentalists to Malay Muslim separatists from the south.

“This is a very mixed group,” says Sunai Phasuk, a senior researcher on Thailand at Human Rights Watch. “But when you dig into what motivates all these different voices, the bottom line is that they believe Thailand needs genuine democracy.”

For some, this line of inquiry means questioning Thailand’s monarchical traditions.

Protesters call for the dissolution of the military-backed government during a flash mob in Bangkok, Thailand on Aug. 8, 2020.
LILLIAN SUWANRUMPHA—AFP/Getty Images

“In the past, there have been statements fooling us by saying that people born into the royal family are incarnations of gods and angels,” student activist Panusaya Sithijirawattanakul reportedly said from the stage at an Aug. 10 rally at Thammasat University. “With all due respect, please ask yourselves, are you sure that angels or gods have this kind of personality?”

She read out a 10-point manifesto urging reforms to the royal institution, including revoking the draconian lèse-majesté law, trimming the monarchy’s budget and banning the palace from politics.

“Frustrated by a charade democracy and a military-dominated government endorsed by the monarchy, these protesters have become dangerously bold, risking the strict lèse-majesté laws to make their voices heard,” says Paul Chambers a special adviser on international affairs at the Center of ASEAN Community Studies at Thailand’s Naresuan University.

Still, even those testing the limits of the taboo-laden traditions have taken pains to emphasize they are not trying to dismantle the monarchy. A student group said in a statement that the manifesto aims only to allow the king “to continue to be esteemed by the people within a democracy.”

Thailand’s current sovereign, King Maha Vajiralongkorn, spends much of the year overseas, flying back for the occasional trip like attending his mother’s birthday last week. He arrived on Wednesday and departed Thursday, according to the New York Times.

Since ascending the throne in 2016, following the death of his widely revered father, Vajiralongkorn has consolidated financial and military control. With changes to the constitution, he made it easier to rule from abroad, brought two important army regiments under his command and gained direct oversight over royal assets. The Crown Property Bureau, a vast real estate and investments portfolio, was previously managed by state agencies. While its estimated worth is not made public, its property holdings in the Thai capital alone were valued at $33 billion, according to a semi-official 2011 biography on Vajiralongkorn’s father.

The 68-year-old king cuts a stark contrast with the late King Bhumibol Adulyadej, who was the world’s longest-reigning monarch when he died at the age of 88. Thought to be unpopular as a crown prince and embroiled in several scandals, Vajiralongkorn’s private life has served as fodder for international tabloids, including his affairs, disowning of children and, according to leaked diplomatic cables, the promotion of his adored miniature poodle Foo-Foo to the rank of Air Chief Marshal.

Thai King Maha Vajiralongkorn presides over the annual royal ploughing ceremony at the Sanam Luang park in Bangkok, Thailand, on May 9, 2019.
Photo by Anusak Laowilas/NurPhoto via Getty Images

Ahead of his official coronation and just months after marrying his fourth wife, Queen Suthida, he appointed his mistress a royal consort. (He later stripped her of her rank and titles, accusing the 34-year-old of trying to elevate herself above the queen.)

The coronavirus pandemic hasn’t helped his image. As the king flies in and out, Thailand’s lockdown has exacerbated already deep inequality and bled the tourism-dependent economy dry. Millions are now jobless while the Southeast Asia nation this week reported its worst economic contraction since the 1998 Asian financial crisis.

“I think [COVID-19] and the economic downturn added up a sense of frustration among the protesters. But I think it has more to do with how King Vajiralongkorn has behaved himself,” says Pavin Chachavalpongpun, a self-exiled Thai academic who teaches at Kyoto University. “They see him as irresponsible, and at times intervening in politics.”

While the palace is widely seen as floating above the country’s turbulent political sphere, it has often played an important role as referee. Since 1932, Thailand has experienced a dozen successful coups, with the palace formally approving each takeover. Last year, Vajiralongkorn endorsed junta leader turned prime minister Prayut Chan-ocha‘s cabinet.

Prayut has promised to restore stability after several years of upheaval. But many young people see his administration as failing to revive democracy, and instead enabling the generals to stay in power long after the 2014 coup.

After the 2019 election was dogged by allegations of irregularities, the court dissolved an opposition party that proved popular among young, progressive voters. Feeling thwarted at the ballot box, protesters demanding a say in the country’s future stormed the streets in February. But their momentum was temporarily sapped by COVID-19 restrictions.

Activists say Prayut’s rule has been marked by escalating repression. Since the coup six years ago, legislation like the computer crimes act and the lèse-majesté law has been used to imprison critics. Activists have also been physically attacked by unidentified assailants, while at least nine dissidents who fled overseas have vanished by Human Rights Watch’s count. Two later washed up on a riverbank, their stomachs filled with concrete.

In a televised address on Aug. 13, Prayut insisted the government has been restrained in handling this summer’s unrest. He called on all citizens “to please say no to the politics of hate and division.”

Previously, he warned that the protesters “went too far” when they broached the topic of the monarchy. But his comments did not stop them.

The increasingly popular Twitter hashtag “WhyDoWeNeedAKing” was projected onto the Democracy Monument Sunday, while photos of the event captured signs that said “we need real democracy” and “Stop pretending that this is still a constitutional monarchy.”

Protesters give a three-finger salute at a rally at the Democracy Monument in Bangkok, Thailand on Aug. 16, 2020.
Lauren DeCicca—Getty Images

Fears of a crackdown

Not everyone embraces the more incendiary turn of targeting the monarchy. Some worry the move could jeopardize their wider, pro-democracy goals.

Previous Thai protests have been crushed with force leaving dozens dead, including students. Some observers fear history will repeat itself. Thailand’s powerful army chief General Apirat Kongsompong railed against “nation-haters,” in a speech earlier this month.

“The [corona]virus can be cured, but what is incurable is the nation-hater disease,” he reportedly said. “Those who hate their own country are not recoverable because they keep mocking their own country.”

Experts say while authorities appear to be going after figureheads in the hopes that the rest of the movement will taper off organically, the strategy risks backfiring. So far, it has only fueled further defiance.

“To threaten students is to declare war on the future,” Parit wrote on Twitter Aug. 17, three days after he was arrested on sedition charges. “Stop harassing students now if you don’t want things to escalate.” 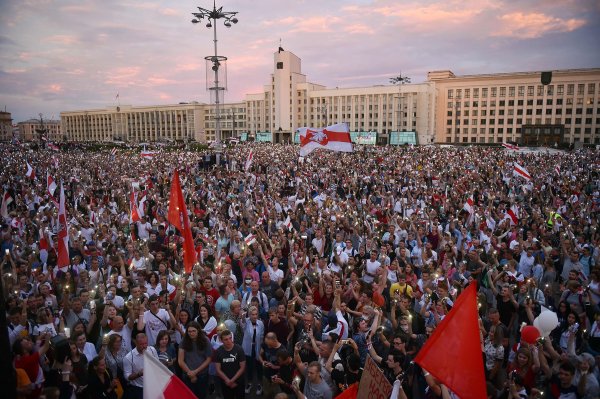 What to Know About the Anti-Government Protests in Belarus
Next Up: Editor's Pick