The Draconian Legal Weapon Being Used to Silence Thai Dissent

Thai university student Patiwat Saraiyaem, center, is escorted by prison officials as he arrives at the criminal court in Bangkok on Oct. 27, 2014
Pornchai Kittiwongsakul—AFP/Getty Images
By Charlie Campbell

Barefoot and shackled at the ankles, two Thai student activists shuffled into court this week to plead guilty to insulting the nation’s monarch by staging a play about an fictitious king.

Patiwat Saraiyaem, 23, and Pornthip Munkong, 25, face up to 15 years in jail under Thailand’s lèse majesté laws, considered the world’s harshest.

The laws are ostensibly protect King Bhumibol Adulyadej and the royal family from defamatory slurs, but are in practice used in vendettas and as a political tool.

The offending content of the play, The Wolf Bride, has not been made public, but it was performed to commemorate the 40th anniversary of a pro-democracy student protest at Thammasat University that was brutally crushed by the then military government in October 1973.

“My boy did not intend to insult the monarchy, he is just an actor,” Patiwat’s father Aiyakan Saraiyaem told news agency AFP outside the court.

Held in custody since their arrests, both students were denied bail, and pleaded guilty in an attempt to avoid further jail-time.

The case is indicative of spiraling political prosecutions in Thailand exacted through lèse majesté, otherwise known as Article 112. In recent years, a bevy of academics, politicians, journalists and even a 61-year-old grandfather have fallen foul of this law. And it has almost nothing to do with safeguarding the Thai monarchy.

It is “political weaponry in the guise of a legal system,” says Jakrapob Penkair, a former Minister to the Prime Minister’s Office, who was accused of lèse majesté over a speech he gave at Thailand’s Foreign Correspondent’s Club that rebuked the nation’s culture of royal patronage. “It encourages people to go berserk.”

This is because lèse majesté cases can be brought by any Thai citizen — no matter what country they reside in, and at any time, against any other individual, Thai or foreign. (Criminal cases, by contrast, are typically brought by a department of public prosecutions.)

This Orwellian culture is fostered by the state. During the tenure of former Democrat Party Prime Minister Abhisit Vejjajiva, who was in power from 2008 to 2011, he appeared on huge billboards asking citizens to “protect the monarchy” by reporting those whom defamed the institution.

And so the vast majority of lèse majesté cases are brazenly political or spurred by personal grudges. Last week, for example, the Democrat Party’s legal advisor filed lèse majesté charges against Suda Rangkupan, a former Chulalongkorn University lecturer and supporter of ousted Prime Minister Yingluck Shinawatra, for wearing the color black during December, the month of King Bhumibol’s birth. (Thais traditionally wear his birthday color of yellow out of respect.)

Preposterous as these charges plainly are, most Thais are afraid of, and conditioned against, speaking out. Thai journalists cannot report on cases freely without putting themselves at risk of prosecution, while courtiers appears to be immune.

“Rational Thais who respect the monarchy no less than the rest are becoming more aware that lèse majesté law is enforced to protect a few privileged commoners lurking around the palace at the expense of the institution itself,” Verapat Pariyawong, a Harvard-trained Thai lawyer who is currently a visiting scholar at the University of London, tells TIME.

Sometimes, an indirect connection with the cause of offense is sufficient. When Ekachai Hongkangwan was arrested in 2012 for peddling pirated copies of an Australian documentary about the Thai monarchy, the fact that that the material was essentially accurate, and that he had no part in its creation, was no defense.

“Because,” Judge Aphisit Veeramitchai explained to the court, “if it is true, it is more defamatory; and if it isn’t true, then it’s super defamatory.” Ekachai was jailed for three and a half years.

Little wonder most people accused of Article 112 either apologize or meekly claim to be misunderstood, rather than attack the lèse majesté laws in the first place. This ensures that there is no public debate on the law.

The scope of lèse majesté has also flourished contrary to the expressed wishes of King Bhumibol. During his birthday speech in 2005, the monarch said, “Actually, I must also be criticized. I am not afraid if the criticism concerns what I do wrong, because then I know. Because if you say the king cannot be criticized, it means that the king is not human. If the king can do no wrong, it is akin to looking down upon him because the king is not being treated as a human being. But the king can do wrong.”

Article 112 is typically deployed with politically expedient timing, rather than at the time of the supposed offense. The former minister Jakrapob made his offending speech eight months before charges were laid; students Patiwat and Pornthip performed their play in October 2013, but were only arrested this past August.

“It’s not about your action, it’s about the timing,” says Jakrapob. “They wait until the moment when you seem most vulnerable.”

So why are students being targeted now? Since Thailand’s latest military coup of May 22, opposition to the new junta government has been brutally quashed. Yet, in recent months, students have become emboldened as public dissatisfaction grows over a slew of scandals, and have displayed great daring by even publicly heckling dictator Prayuth Chan-Ocha.

“They are using the youngsters as an example,” says Jakrapob of the latest charges, “to say that regardless of your age or social background, we will not hesitate.”

And so as protests increase, lèse majesté has followed suit. A study published November by the Paris-based International Federation for Human Rights noted 18 cases since the generals seized power, usually tried through fast-track kangaroo courts. These include a radio show host jailed for five years, and a 24-year-old student jailed for two-and-a-half years for posting a Facebook message under a pseudonym. On Wednesday, Internet providers were granted sweeping new powers to remove any content verging on lèse majesté. The junta even pursues those who have fled overseas.

It appears the Thai establishment wants to silence dissent before the delicate time of succession approaches. King Bhumibol is the world’s richest monarch, worth an estimated $30 billion, but is 87 years old and ailing. Many ascribe Thailand’s festering political travails to the wrangling for control of this vast fortune before Bhumibol passes on the crown.

This has already been reflected in the purges of powerful policemen connected to the recently jilted wife of Crown Prince Maha Vajiralongkorn, using, among other charges, lèse majesté. The military must maintain a vice-like grip on power to ensure the succession takes place as its powerful backers wish.

“At this very delicate time of transition, they cannot afford to give an inch to anyone,” says Jakrapob, “and the young people worry them.” 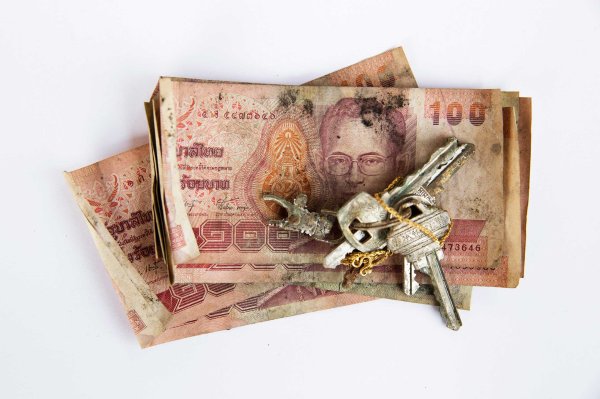 See Personal Possessions of the 2004 Indian Ocean Tsunami Victims
Next Up: Editor's Pick