Thailand’s popular upstart opposition party has been dissolved on Friday, after a court said it violated finance rules.

The country’s Constitutional Court ruled that a loan from co-founder Thanathorn Juangroongruangkit to the Future Forward Party (FFP), which swept to power in 2019 elections, was illegal. The court has also ruled that members of the executive committee of the party, including Thanathorn, are banned from politics for 10 years. Future Forward Party is popular with young voters supportive of its calls for democratic reform and curtailment of military power.

Thanathorn, the scion of a car parts manufacturing company, has defended the 191.2 million baht ($6.1 million) payment he made to the party, saying it was a loan.

“Loans are not income and I already explained this to the [Election Commission] when I was summoned to give information about the lending two months ago,” he said late last year, according to local media.

Laws related to political parties in Thailand say that no one “may donate cash, assets or other benefits worth more than 10 million baht ($315,000) to a political party.”

The verdict was met by loud boos at Future Forward Party’s headquarters, where supporters had gathered on Friday to watch a screening of the verdict being read, and earlier in the day the hashtag #SaveFutureForward began trending on social media.

Duncan McCargo, the director of the Nordic Institute of Asian Studies at the University of Copenhagen, tells TIME that the ruling is a disappointing development for Thai politics.

“Six million people voted for that party,” he says. “A lot of those people already felt disenfranchised and alienated, and now they’re going to feel more so.”

“The Future Forward Party is the latest in a long line of opposition political parties in Thailand to be banned,” Francisca Castro, a member of parliament in the Philippines and a member of the group ASEAN Parliamentarians for Human Rights (APHR), said in a statement. “It is increasingly apparent that any party which seeks to threaten the military and the establishment’s political hegemony will not be tolerated.”

Since the party’s founding in 2018, more than 25 legal cases have been brought against it and its members. Thanathorn was disqualified from his seat in parliament over allegations that he breached media shareholding rules intended to create a level playing field among political candidates. He has denied the charges, saying he had transferred the ownership of the shares before the election.

The FFP narrowly avoided dissolution in late January when the Constitutional Court found the party not guilty in a case that alleged it had attempted to overthrow the monarchy, which is the power broker in Thailand’s government, and accused it of having links to the Illuminati, a secret society that conspiracy theorists say seeks world domination.

The party’s quick success may have lead to its downfall. Although Thailand held a general election in 2019, the military general who seized control in a 2014 military coup was installed as Prime Minister under electoral rules created under the junta’s rule. The military-led government, which is backed by the monarchy, has disbanded several pro-democracy parties in the last two decades.

“The FFP was seen as an existential threat; in many ways it stood for a set of ideas and values that were antithetical to the values of the military junta who seized power in 2014,” McCargo says.

Still, the party’s dissolution may not be spell its demise. Thanathorn has said that a new party is already being set up in preparation for Future Forward’s dissolution.

“Our hearts and souls are committed to bringing about democracy and equality in Thailand, where everyone has rights and liberty,” Thanathorn said in December, according to local media. “A party can be disbanded, but not its ideology or its resolve. If dissolved, a new one will be founded. If dissolved, we will fight on.” 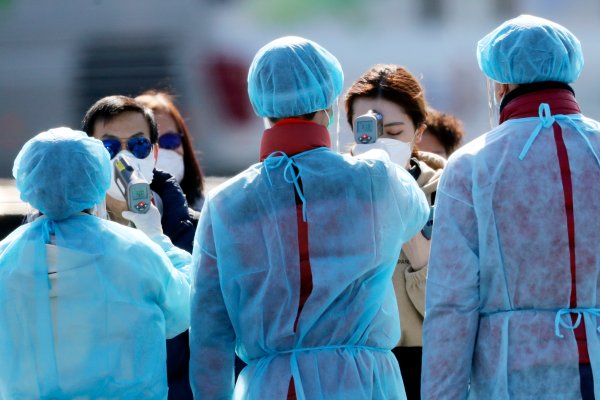 Abe Under Increasing Fire for Handling of Virus-Stricken Cruise
Next Up: Editor's Pick