An army of canary-colored bulldozers has already begun clearing the land, though construction won’t begin until Jan. 10. The ornate, wooden structure has been designated 12 hectares in front of Bangkok’s golden-spired Grand Palace, with ponds at its corners and a quintet of gradated stupas. Measuring up to 50 m high, these represent Mount Sumeru, the mythical five-peaked mountain of Hindu, Jain and Buddhist cosmology. The complex will be completed around September.

And gone soon after. The funeral pyre for King Bhumibol Adulyadej is a lavish affair, though incommensurate to the adoration heaped on Thailand’s beloved monarch, who died Oct. 13 at the age of 88. Bhumibol, who was born in Cambridge, Mass., is credited with steering his country though seven decades of rapid change and political strife with love and devotion.

Few Thais are old enough to have known another King, compounding the sense of loss and presenting a challenge for Bhumibol’s son and heir, Vajiralongkorn Bodindradebayavarangkun. Late Thursday, the 64-year-old was named Rama X of the 234-year-old Chakri dynasty in a televised address by junta leader Prayuth Chan-ocha.

“I accept [the invitation to be King] and to fulfill the royal intentions [of my late father] for the benefit and happiness of all Thais,” Vajiralongkorn said in a statement.

They were the first words directly attributed to the erstwhile prince since his father’s passing. While Bhumibol was a unifying figure, Vajiralongkorn has an unfortunate reputation as an eccentric playboy. Many Thais are anxious to find out what type of monarch the man will be at a time when military rule is entrenched and dissent brutally quashed. “To some extent, Vajiralongkorn will thus likely rule as king using the borrowed legitimacy of his dad in order to obtain support from the people,” says Paul Chambers, a political scientist in the northern Thai city of Chiang Mai.

Scandal has closely followed the new Thai King. Bhumibol’s stoic persona — he was almost never seen smiling, a curiosity that even inspired the title of a controversial biography — lent him an almost ethereal quality. Vajiralongkorn, by contrast, is known as a lover of fast cars and women. He is thrice married and has seven children, though most have been stripped of their royal titles and exiled.

He acrimoniously split from his last consort, former Princess Srirasmi, in 2014, and her parents were jailed for royal defamation soon after. Srirasmi remains infamous for a 2007 leaked video showed her barely clothed and sharing birthday cake with the couple’s pet poodle, Foo-Foo. Foo-Foo died last year, though not before earning the military rank of air chief marshal. U.S. diplomatic cables published by WikiLeaks described the prince as “long known for violent and unpredictable mood swings.”

The royal palace has tried to rehabilitate the new King’s image as his father’s health deteriorated. In August, he led thousands on a bike ride through Bangkok to honor his mother, who is severely ailing, on her 83rd birthday. However, tittle-tattle persists: in July, photos of Vajiralongkorn wearing a crop top, low-slung jeans and sporting yakuza-style stick-on tattoos were published by German tabloid the Bild, causing consternation in his homeland.

Unease about Vajiralongkorn assuming the throne is what many people ascribe Thailand’s latest military coup of May 22, 2014. Over the course of his reign, Bhumibol built the world’s largest royal fortune — estimated at $30 billion in 2011 — and the monarchy wields extraordinary powers of patronage. Thailand has very few internal or external threats, yet its bloated and top-heavy armed forces gains legitimacy as portraying itself as defender of the monarchy. In truth, it is more closely aligned with Thailand’s wealthy elites. The question now is whether King Vajiralongkorn plans to shake up this nexus of power.

“What you saw from him 10 and 20 years ago will be the same,” says Pavin Chachavalpongpun, a Thai political scientist at Kyoto University in Japan. “And when you see a weaker King you might see a more assertive role of the military.”

Many royalists will be content to see Vajiralongkorn take a backseat. He currently spends most of his time in southern Germany, where he has two luxury villas and a private household of 50 people. However, the new King has already made his own political moves. Friends of his father have been replaced by his own confidantes in key positions, especially in the opaque, quasi-official Crown Property Bureau, which handles royal assets. The new army chief is also from a different regiment from that of the coup leaders, raising the possibility of factional infighting.

“If the ascending sovereign is able to balance off these factions effectively while consolidating power, then the Thai monarchy will persevere in dominating the military,” says Chambers.

Bhumibol was sincere in his efforts to help his people, though his frail health meant he was unable to fight all that was done in his name toward the twilight of his reign. Thailand has the world’s harshest royal defamation laws, known as lèse-majesté or Article 112. They are increasingly used by the ruling junta to quash dissent. Although widely opposed in private, the Thai public has not openly fought this trend owing to deep respect for Bhumibol.

However, Vajiralongkorn does not share the same respect as his father, raising the possibility of civil and political upheaval should these stifling tactics be used in his name. Conversely, Vajiralongkorn has an opportunity to vocally oppose the excesses of the junta government, and win the love of the people by helping guide his country back to democracy.

Already, Vajiralongkorn has been redeemed in the eyes of many Thais by not ascending to the throne immediately after his father’s death. Through Prayuth, he instead said he wanted “time to deal with his grief and express his sadness.” Although he spent most of those 50 days in Germany, it conveyed an image of him as sensitive and not power-hungry.

In any case, that interim is now scrubbed from the history books. The junta has backdated his ascension to the throne to Oct. 13, the day of his father’s passing, in keeping with the principle of Le roi est mort, vive le roi. Vajiralongkorn cannot turn back the clock on his own indiscretions so easily. The future, however, is his to write. 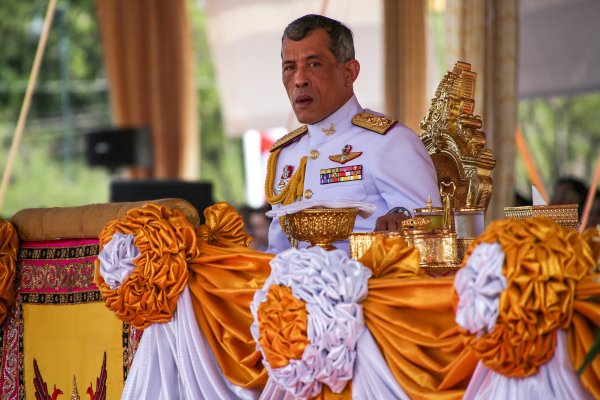 Thai Crown Prince to Be Named King
Next Up: Editor's Pick