Thailand Is Marking the Darkest Day in Its Living Memory

Thai activists hold candles at Thammasat University in Bangkok on Oct. 6, 2016. Buddhist monks, mourners, activists and others gathered Thursday to mark the 40th anniversary of one of the darkest days in Thailand's history, when police killed scores of university students at a peaceful protest
Sakchai Lalit—AP
By Feliz Solomon

Oct. 6, 1976, is a date that still haunts the government and people of Thailand. On it, state forces massacred scores of student activists on the lawn of Bangkok’s Thammasat University.

The campus had been occupied by leftist student demonstrators who opposed the return to Thailand of a former dictator. The military and arch royalists accused them of being antimonarchical communists, and the military, police and right-wing paramilitary forces had Thammasat surrounded.

With thousands of students under siege, authorities opened fire onto the campus with M-16s, recoilless rifles and grenades. For several hours, these forces — later joined by vigilantes — shot, beat, raped and murdered unarmed students, some as they tried to either flee or surrender. The chaos was used to justify a military coup later that same day.

Official figures put the death toll at 46, with 167 wounded and more than 3,000 students arrested. The death toll is disputed to this day, with survivors putting it at more like 100.

Decades later, no one has been held accountable for the atrocity, and the country’s current junta — which assumed power in a coup in 2014 — has shown that it is still highly sensitive to discussion of it.

Joshua Wong, a slight and bespectacled 19-year-old from Hong Kong, may not appear to pose much of a threat to Thailand’s military regime, but the young activist is known internationally for helping to lead 79 days of well-organized and politically disruptive pro-democracy protests in Hong Kong. Wong was detained and deported shortly after he landed in Thailand on Wednesday, a day before he was due to address Thai students and activists at an event commemorating the massacre at Chulalongkorn University in Bangkok.

He came on the invitation of Netiwit Chotiphatphaisal, a 20-year-old student of political science who earned notoriety earlier this year for refusing to prostrate himself in front of a statue of Thailand’s former Kings.

While the news of Wong’s expulsion prompted speculation that the Chinese government had asked Thai authorities to deny him entry, Paul Quaglia, a security expert for PQA Associates in Bangkok, says Thailand may have had its own reasons to prevent him from coming in to “stir up talk about democracy” among Thai youth.

“This is clearly a confluence of interests at the least,” Quaglia tells TIME. “The Thai government has no interest in a foreign student democracy leader coming here to speak to Thai students on the anniversary of the 1976 student ‘massacre.’”

Read More: Activist Joshua Wong Has Returned to Hong Kong After Being Denied Entry to Thailand

“I think it’s a combination,” Netiwit, the Thai activist, tells TIME. “The Chinese intervene in Thailand, and also, Thailand doesn’t want Joshua Wong to come.” He says Wong plans to address the conference via Skype, and on Thursday morning he was confident that authorities wouldn’t intervene.

As of Thursday morning local time, all was peaceful in Bangkok as monks, students and bystanders held vigils in several parts of the city. The event at Chulalongkorn University, which was partly organized by Netiwit, is set to feature a series of talks by student activists and survivors to commemorate the massacre.

In the weeks leading up to that October morning, thousands of students had gathered to protest the return to Thailand of former dictator Thanom Kittikachorn, who had re-emerged from exile amid a tense political situation fueled by fears that communism would soon spread to the Southeast Asian nation from its neighbors, Laos and Vietnam. Several people had already been killed during the series of demonstrations in the capital, but the crowds continued to swell.

The brutality that ensued is well documented. In fact, if you’ve ever handled a record from punk rock band the Dead Kennedys, you have probably seen the horror of the Bangkok massacre. Despite its name, the cover art for the album Holiday in Cambodia is actually from Thammasat, and consists of a Pulitzer-winning photograph of a hanged corpse, in the split-second before a man brings a folding chair down on a lifeless head while a crowd watches.

This photo taken on Sept. 30, 2016, shows graffiti depicting a violent ultra-royalist with a chair from the iconic photograph of the Oct. 6, 1976, student massacre by Associated Press photographer Neil Ulevich, on the outside wall of Thammasat University in Bangkok
Lillian Suwanrumpha—AFP/Getty Images

The image, captured by Associated Press photographer Neal Ulevich, has become iconic of the brutality unleashed by a paranoid military that fostered distrust and encouraged mob violence. But while the picture is recognizable around the globe, many in Thailand don’t know much about the events leading up to that horrific moment.

This year’s anniversary is significant. Not only does it mark four decades since the incident, which is referred to in Thailand as the Oct. 6 Event, but it also serves as a grim reminder of Thailand’s record of impunity.

“As no state official has even been held accountable for the massacre at Thammasat University,” Kingsley Abbott, a legal adviser with the International Commission of Jurists, tells TIME, “the incident has become emblematic of the culture of impunity that continues to plague Thailand to the detriment of real reconciliation within society.”

— With reporting by Charlie Campbell / Beijing 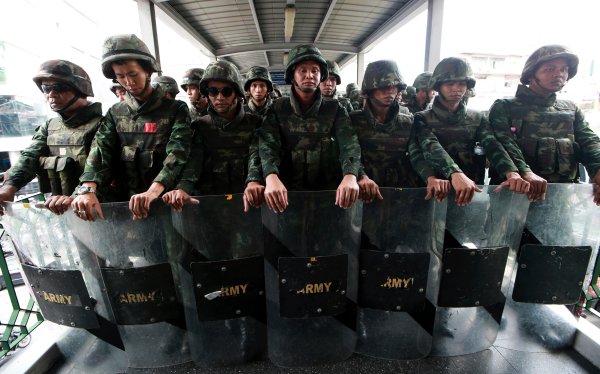