'We Are Risking Everything.' Hong Kong's Young Rebels Stake Everything on Their Struggle

Law enforcement would inevitably arrive to evict the hundreds of young, black-shirted demonstrators who broke in and defiled the Hong Kong legislature.

A rumor that police were already there briefly dispersed the sea of anti-government protesters from the harbor-front complex. But after the false alarm, the jittery crowd returned. For the last hours of July 1—exactly 22 years after Hong Kong ceased to be a British colony—the city’s political heart was theirs.

“This Legislative Council belongs to us, the people,” said one of several masked protesters, delivering an impromptu speech at the chamber’s dais. “Day by day, night by night, you will be seeing us,” he vowed to the absent authorities as he raised a defiant arm. It was sheathed in cling-wrap, as a protection against the fiery sting of police pepper spray.

He and the thousands of other young activists who spent the day battering their way through the building’s glass and metal entrances see themselves as commandos in a movement to safeguard Hong Kong’s freedoms from Beijing’s depredation. Many are high school and university students. For weeks, they had been arguing that confrontation was the only way to make their voices heard by stonewalling officials.

But the storming and ransacking of the legislature has cast their struggle in rather more dramatic light. With the corridors trashed and “H.K. is not China” spray-painted on the walls, their movement was now not just a protest but a rebellion—against the Hong Kong government and the Chinese Communist Party itself.

Protesters smash the glass doors and windows of the government headquarters in Hong Kong on July 1, 2019, the 22nd anniversary of the city's handover from Britain to China.
ANTHONY WALLACE—AFP/Getty Images

‘Welcome to the War Zone’

By the time the police materialized that Monday night, the protesters were already retreating through the Admiralty district’s maze of luxury malls and multistory government offices. Volleys of tear gas and an advancing column of officers cleared any would-be holdouts. “Welcome to the war zone,” said one, as he ran from the smoke.

The political crisis gripping Asia’s financial capital this summer kicked off over a bill that would allow, for the first time, extradition to mainland China. But it has since swelled into a broader struggle for democracy, and a repudiation of Chinese sovereignty over the enclave. Opposition to the bill, which critics fear would enable Beijing to round up local dissidents and detractors, has united business owners, families, church groups and bespectacled students, galvanizing them into millions-strong marches. Consecutive weeks of unrest forced the government to suspend the controversial proposal. But the protesters are not pacified by a deferral. The bill has released years of collective rage not only against a political oligarchy, rigged to disenfranchise the great majority of the metropolis’ 7.2 million highly educated citizens, but also against the looming menace of Beijing.

“This fight against extradition to mainland China is seen as the violation of the last firewall protecting Hong Kong from Beijing,” said Victoria Hui, an associate professor of political science at the University of Notre Dame. “The threat is too severe.”

Read more: Why Hong Kong protesters aren’t calling it quits after the suspension of a controversial extradition bill

The unprecedented break-in at the legislature revealed the intensity of the grievances. Once inside the carpeted chambers, where unrepresentative lawmakers dictate Hong Kong’s future, the invading youth moved swiftly to desecrate the emblems of post-colonial power. They defaced portraits of the city’s political leaders and spray-painted over the official seal, then draped the British colonial flag over the podium.

Many of the activists who smashed their way into the building described their act as one of desperation after a blitzkrieg of rallies, marches and sit-ins failed to elicit much of a response from the government. “It was you who taught me that peaceful marches are useless,” said a message scrawled on a pillar just outside the chamber entrance.

Their actions did not come without heated debate. At a demonstration a little more than week earlier, some wondered aloud if Hong Kong’s summer of disobedience was too tame.

“One million people came out, then two million, but the government simply doesn’t see this as a problem,” said a 24-year-old architect, referring to the mammoth marches of June 9 and June 16. “Violence is not the goal we are trying to achieve,” he added while sitting outside the same Legislative Council entrance that protesters would batter through days later, “but a means to make the government listen.”

A 23-year-old protester, nicknamed Billy, said: “Peaceful tactics earn us the public’s support and the moral high ground. But when the government doesn’t respond, that’s when the more aggressive camp comes out.”

That night, protesters laid siege to police headquarters. When the encrypted messaging apps they use to organize themselves began to buzz with calls to storm the complex, the hive mind that drives the predominately leaderless movement quickly batted the idea down. Eggs and obscenities were lobbed instead—but there was a sense that these were simply the opening salvos of a much larger confrontation.

A police officer fires teargas during a protest on June 12, 2019 in Hong Kong.
Anthony Kwan—Getty Images

In Hong Kong, protests have long been the only meaningful avenue for voicing political opposition, with the ballot box heavily skewed against citizens’ favor.

Only half the legislature’s 70 seats are directly elected. The rest are filled by closed polls among special interest groups. This tends to ensure that pro-establishment forces retain a majority. The city’s leader is selected by a tiny, carefully vetted electoral college of mostly pro-China voters and is consequently seen as Beijing’s representative, rather than the people’s.

On the matter of Chinese sovereignty, Hongkongers have never had a say. After 156 years of Western-style government, the former British colony was not consulted ahead of its retrocession to China in 1997. Since then, protests have unsurprisingly erupted whenever Beijing moves to more closely align semi-autonomous Hong Kong with the People’s Republic.

Many of the young protesters facing off with riot police this summer are veterans of such protests—in particular the 2014 call for direct elections of the chief executive. The Umbrella Movement’s peaceful street occupation paralyzed the city’s financial core, but ended without concessions from Beijing. The leaders were imprisoned, and a generation of activists left disillusioned.

“It was a total failure—we sat outside for 79 days for nothing,” Billy says. “The only thing we achieved was further polarizing society.”

Beijing “forced so much down Hong Kong’s throat over the last five years [that] it didn’t expect the blow-back it got on [the extradition bill]. No one did, really,” Kong Tsung-gan, the author of a collection of essays on Hong Kong’s freedom movement entitled As Long as There Is Resistance, There Is Hope, told TIME.

Kong said that by pushing the enclave so far, Beijing cemented “a new form of nationalism” based on a Hong Kong identity as distinct from a Chinese one. Polling last month by Hong Kong University found that only 11% of people in the enclave identify as Chinese. The majority, especially 18-29-year-olds, see themselves primarily as “Hongkongers.”

Experts say such a large segment of Hong Kong society has been galvanized to join the extradition fight—including first-time protesters—because the bill threatens the unique freedoms that underlie this Hong Kong identity, and distinguish the territory from the rest of China.

The younger generation says they feel this threat so acutely because they inherited a city that in their experience has always been drifting into Beijing’s orbit. Many of the protesters were born after the 1997 handover and have no memory of British rule. They have come of age with a countdown as the 50-years of autonomy guaranteed during the handover expires in 2047. In the interim, they are seeking not only to defend their existing rights, but also to push for greater ones, like demanding to be “liberated” from Chinese “colonization.”

“We have to keep in mind that we’re not only dealing with the Hong Kong government, but also dealing with the central government—one of the most authoritarian governments in the world,” says Billy. “This isn’t fun and games. We are risking everything, our lives, our careers, our studies, to fight for our future.”

A protester gives a speech after breaking into the legislative council on July 1, 2019 in Hong Kong.
Anthony Kwan—Getty Images

If the Umbrella Movement was the awakening of the Hong Kong youth’s political consciousness, this summer has been their moment of defiance.

Embracing confrontation means these demonstrators must take great pains to protect their anonymity, donning face masks, communicating on secure messaging apps like Telegram and buying single-ride subway tickets (so that their stored-value cards can’t be used to trace their movements). Not wanting to expose figureheads to the risk of prison, they are without them, organizing their street occupations and sieges by word of mouth, online message boards and airdrops between iPhones.

“Without a leader there is more of a sense of everyone taking initiative,” says Ann, a 25-year-old protester and friend of Billy’s.

They’ve pooled their resources and devised a lexicon of hand signals to relay the need for protective gear, such as googles and umbrellas. Bruce Lee’s advice, “Be water, my friend,” has become the movement’s approach. Protests are highly fluid, with blockaded roads surrendered overnight only to be reoccupied the next day.

“During the Umbrella Movement when we smelled tear gas, we would just run,” says Lily, a 29-year-old marketer and another friend. “This time, we run—and then come back.”

So far, the young protesters’ clashes with police have only shocked more people into action. Two million people, by organizers’ estimates, joined the June 16 protest march—many because they were appalled by the way the police suppressed a protest a few days earlier with tear gas and rubber bullets.

But it is unclear just how divisive the young protesters’ vandalizing of the Legislative Council will prove. In a city where demonstrators scrape candle wax off the street after vigils, and collect their trash after acts of civil disobedience, these young rebels have ventured into unchartered waters.

Beijing has accused them of committing “atrocities” and instructed the local government to take criminal action. There will surely be a backlash against the movement that cornered Chinese President Xi Jinping into one of the biggest climbdowns of his tenure and humiliated Beijing in front of the world.

For now, protesters quietly await the consequences, sharing numbers of lawyers and encouraging each other to take care of their emotional and mental wellbeing. There is no concerted plan for what comes next, but direct action tends to precipitate quickly.

After protesters stormed into the legislative chamber Monday, many stood blinking in the dark with uncertainty, and a debate ensued over whether to stay or go. One protester cast off his mask and stood up on the desks. “We really cannot afford to lose anymore,” he said, urging his fellows to join him inside.

These young protesters are risking much to put themselves on the front lines. But they argue they risk more by not taking a stand at all.

“This is the beginning of the Hong Kong people’s march to democracy that was awakened five years ago during the Umbrella Movement,” says Marcus, a 23-year-old protester. Ensuring a victory over extradition “isn’t the end,” he adds, “but just the beginning.” 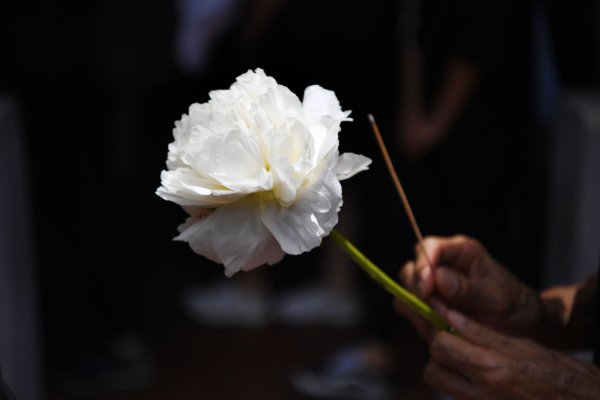 Another Hong Kong Protester Fell to Her Death
Next Up: Editor's Pick