Buy the cover art→
Painting by Shana Wilson for TIME

The youngest First Lady in nearly 80 years, Jacqueline Kennedy was unlike any before or since. What had been criticized about her during her husband’s campaign for President—her style, her hair, her elite education and upbringing—she recognized as assets once she was in the White House. She was savvy at leveraging her public persona, quickly becoming a fashion icon and a leading proponent of prioritizing history and the arts for everyday Americans.

After her husband took office, she turned her attention to the refurbishment of the White House. She took care to solicit artifacts from previous Presidents, as well as redesigning rooms to reflect different eras of American history. The First Lady’s nationally televised tour of the renovated White House in 1962 drew a record 56 million viewers from around the world. (She later won an honorary Emmy.) Having studied art history, she understood the power of cultural monuments to create national and historical identity. This understanding, combined with her trendsetting style and appearances, helped her become so popular that President Kennedy famously described himself as “the man who accompanied Jacqueline Kennedy to Paris.”

After a little less than three years in the White House, at the age of 34, she was made the world’s most famous widow. She had the unimaginable composure to understand the historical and public importance of her reaction to her husband’s assassination, even amid her personal grief and trauma. She made several swift and crucial choices that helped keep the nation together: she wore the now iconic pink suit with bloodstains during Lyndon B. Johnson’s swearing-in, to remind the country of what had just happened hours earlier. She orchestrated a funeral based on Lincoln’s that gave a ritual and pageantry, cementing her husband’s legend. And she crafted her family’s Camelot story into a carefully controlled narrative, to allow the nation to have the sort of royalty they desired.

Following her husband’s passing, Jackie worked to create a safe and nurturing environment for her children, eventually marrying Aristotle Onassis. She later became an editor at Doubleday and a vibrant part of New York City life—particularly with her advocacy for preserving Grand Central Terminal and her support of the American Ballet Theatre. For a woman so aware of her public narrative, she surprisingly said, “I want to live my life, not record it.” In our current age of obsession over how we present ourselves to the world, she is a model of one who found beauty amid tragedy to truly appreciate her precious, only life.—Natalie Portman 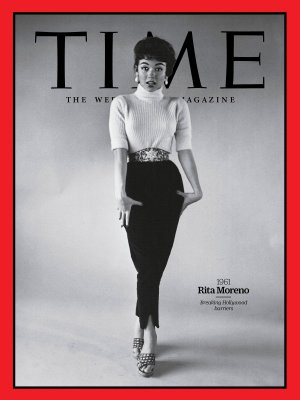