Inside the Day That Turned Jacqueline Kennedy Into 'Jackie O.'

Jacqueline Kennedy Onassis, embracing her daughter, Caroline Kennedy, and her new husband, Greek shipping magnate Aristotle Onassis at their wedding reception aboard the yacht, Christina, shortly after they tied the knot on the Island of Skorpios, Greece, on Oct. 21, 1968.
Express Newspapers—Getty Images
By Olivia B. Waxman

While Jacqueline Lee Bouvier Kennedy was the one married to President John F. Kennedy, many Americans felt married to the idea of the two of them. Their relationship was central to the concept of the Kennedy “Camelot” that is still the object of so much national nostalgia.

So it was that many took the news hard when, nearly five years later after his assassination, the 39-year-old former First Lady felt ready to move on.

She remarried 50 years ago this Saturday, wedding the flamboyant Greek shipping tycoon Aristotle “Ari” Onassis, who claimed to be 62 but had once had a passport that placed him a few years older than that. “Everything, from sugared almonds to the waiting yacht, was ready to celebrate the new life of Mr. and Mrs. Aristotle Onassis,” TIME noted in its coverage of the secret Greek Orthodox wedding ceremony. “Everything, that is, except what is known as ‘the world,’ which seemed unable to comprehend or accept the match.”

The magazine explained the level of shock in that Oct. 25, 1968, cover story:

The nuptials also came as a shock in a more basic sense because of how suddenly the wedding happened.

Even the bride’s mother said it was a surprise, and LIFE magazine quoted her as saying her daughter informed her by calling to ask her if she could get on a plane the very next day. Jackie’s younger sister Lee Radziwill said the engagement was a surprise to her too. She had dated Onassis previously, and the way the news was handled would end up souring their relationship.

However, in the context of the other shocking events of the momentous year that was 1968, covering the wedding, as former Time Inc. publisher James R. Shepley wrote in a note to readers, “offered a pleasant, if hectic, change of pace” for reporters “in a year that has seen more than its share of grim news.”

Unsurprisingly, there was a lot of speculation about what exactly drew the two together. Some Kennedy-watchers speculated that she, as a paparazzi target, was attracted to his private security detail. “The idea that he owned a yacht and could just literally sail her away from all of her troubles and take her to this private island, a place where she could just be reclusive, was incredibly appealing,” Tina Cassidy, author of a biography of the former First Lady, Jackie After O, says in the 2017 documentary Jackie: A Tale of Two Sisters. But he also had had his eye on her for a while. Cassidy notes that he was one of the first visitors to the White House after the assassination, arguing, “I think people also believed that Onassis was always looking for an angle with Jackie, and it wasn’t until after Robert Kennedy’s assassination that he felt like he had a window and could put the moves on her.”

Unfortunately, the pair did not live happily ever after.

As TIME reported in his 1975 obituary, “After the honeymoon, the marriage was filled with what one intimate of Ari’s called ‘the nights of long silences.’ Jackie loved concerts, ballet and theater; Onassis preferred raucous bouzouki music, belly dancers and at times the company of roistering Greek businessmen. Much of the time they lived separate lives.” He was never the same after the sudden death in 1973 of his only son. He expressed the idea that President Kennedy’s death had cursed his wife, and in turn, him, calling her “the witch,” according to TIME’s 1994 obituary for the former First Lady.

But the public, even after the wedding, maintained its soft spot for Jackie. She became “Jackie O.,” a nickname that first appeared in the pages of TIME a few months after the wedding, and the fascination with her life never faded — even when it was impossible to know the exact reason for every little thing going wrong in it. In fact, as a symbol of grace in times of sadness, her personal struggles perhaps in the end made Americans love her even more. 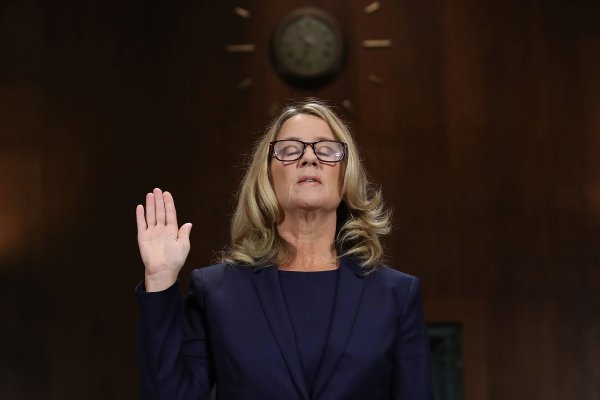 The Battle Over Brett Kavanaugh Has Ended. But the Pain His Hearing Triggered Has Not
Next Up: Editor's Pick