The White House Tour Seen in Jackie, as Described in 1962

When Natalie Portman stepped into the role of Jacqueline Kennedy in the new movie Jackie, out Friday, the actress did not lack for historical references on which to base her performance. That record included one very important piece of video footage: the First Lady’s televised tour of the White House, which aired in early 1962.

Ever since the White House had been rebuilt after the War of 1812, Presidents and First Ladies had used the home’s decor to reflect the grandeur of leadership, whatever that meant in their own eras. Accordingly, as styles changed, so did the furniture. Older items were sold off; as explored in Inside the White House from TIME Books, President Chester A. Arthur presided over the sale of two dozen wagons full of historic furniture from the executive mansion. Jackie Kennedy, however, wanted something different: under her watch, the White House would become a showcase for American history. As TIME put it in 1961, “Jackie formed a Fine Arts Committee to help her transform the White House into a ‘museum of our country’s heritage.'”

And in 1962, a televised tour was a way to show her work to the nation, and prove that it was worth the effort. (As the New York Times has reported, shooting the tour scenes for Jackie was a matter of meticulous care—it even required making the First Lady’s outfit in two colors, one that matched the red she wore on that day and one that would appear the correct shade of gray when shot in black and white.)

The week the tour aired, TIME noted with some amusement that it was an “impressive” display of the First Lady’s knowledge:

While TIME’s reporter may have viewed the event as merely pleasant, the tour would in fact turn out to be part of one of the Kennedy family’s most lasting impacts on the American presidency. The First Lady’s efforts led to the creation of the White House Historical Association, and redefined what a new administration could and could not do to their home. Ever since, even as tastes have changed, the connection between American heritage and the look of the White House has remained. 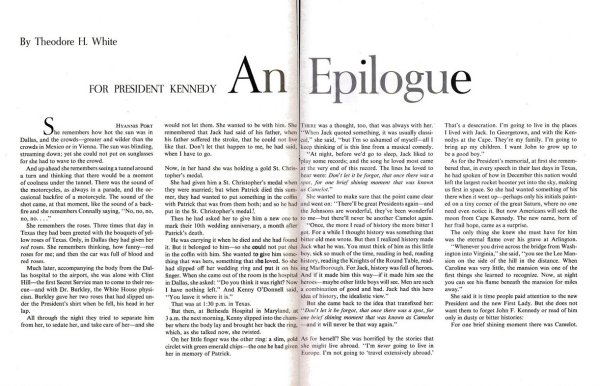 This Is the Real 'Jackie' Interview With LIFE Magazine
Next Up: Editor's Pick